The mainnet launch of Ontology is fast approaching as scheduled for June 30. This brings us to the most important part i.e. token swap.

The top cryptocurrency exchanges have already announced their support for the upcoming Ontology token migration.

Currently, at the top as per Coinmarketcap, OKEx registered the daily trading volume of $1.6 billion. Today, the exchange made the official announcement. 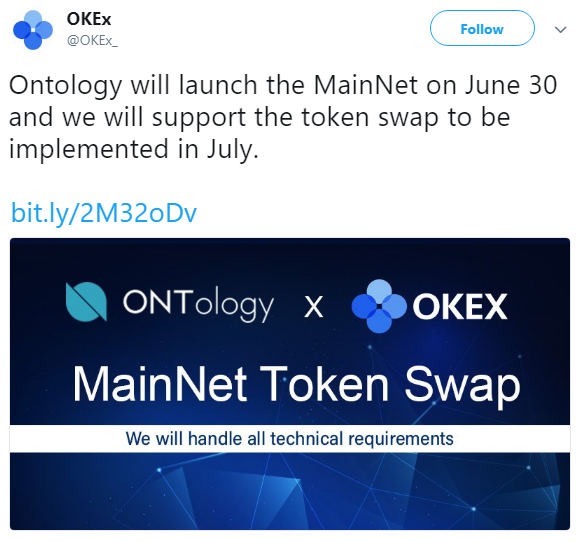 Binance also announced its support early in the day. It is one of the most popular cryptocurrency exchanges whose past 24-hour trading volume has been $1.3 billion.

But this wasn’t all, along with announcing support for token swap, Binance also provided further liquidity to the ONT token by adding the ONT/USDT trading pair. 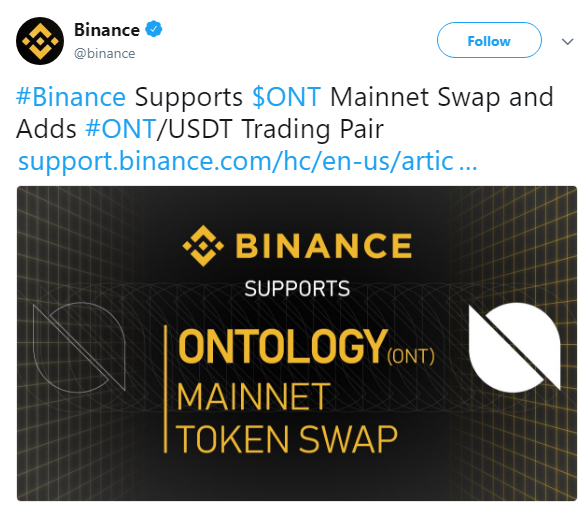 “Binance would like to confirm that we will support the ONT Mainnet Token Swap. We will handle all technical requirements involved for all users holding ONT. The swap is scheduled to occur on 2018/06/30. Binance will also distribute the corresponding ONG on a monthly basis to all ONT holders.”

“MainNet ONT Token Swap Notice”. Talking about the dual token (ONT and ONG) model it uses, “After the launch of Ontology’s MainNet, users will be able to exchange NEP-5 ONT for ONT on the Ontology MainNet, which will start to release ONG periodically.”

The blog talks about two kinds of mapping i.e. automatic mapping for which supporting exchanges will push out the notices and manual method involves using an NEO wallet and ONTO (to be released in July) for swap completion.

Complete information on manual method is provided by the Ontology team on its official blog on medium. 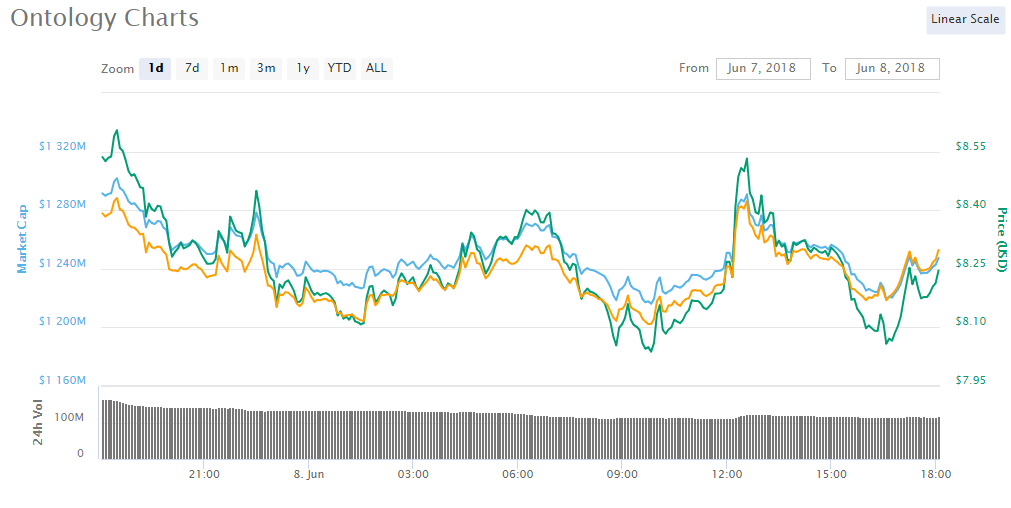 Starting the day from $8.54, ONT price is down by 3.24 percent at $8.21. Currently, at 19th position, ONT coin is in red against BTC but feeling the greens against NEO. It has been pretty up and down movements for Ontology just like any other cryptocurrency.

With the Ontology Mainnet approaching, ONT community is expecting a good surge in its prices. However, given the market sentiments, it is hard to say which way the ONT price will move.

Do you think ONT price will swing upwards dramatically or will maintain its current momentum? Share your thoughts with us!

advertisement
✓ Share:
Disclaimer
The presented content may include the personal opinion of the author and is subject to market condition. Do your market research before investing in cryptocurrencies. The author or the publication does not hold any responsibility for your personal financial loss.
About Author
Vikram
Vikram currently focus is writing on Cryptocurrency. In addition to content writing, he also experienced in WordPress and curating Images.

Vikram
5 Articles
Vikram currently focus is writing on Cryptocurrency. In addition to content writing, he also experienced in WordPress and curating Images.
advertisement