In an annual release titled “Crypto-Confidence Index” by Europe’s leading Bitcoin exchange, BitFlyer, citizens in Europe are optimistic in Bitcoin and cryptos survival come 2030. The study, carried out annually in March happened to coincide with the height of panic and government shutdowns due to the COVID-19 pandemic.

Confidence in the future of cryptocurrency across the continent and the U.K remains high as citizens cope with the COVID-19 lockdown. Despite the volatility of Bitcoin’s price during this time, the confidence in crypto remains high. Two-thirds of the population believe that cryptocurrency will still be functional in 10 years’ time, representing a 3% increase in comparison with 2019’s Q1 data. 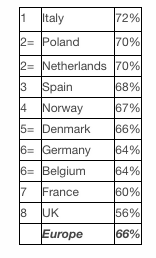 The poll took opinions from over 10,000 participants distributed across 8 countries in Europe.

One of the best discoveries in the report entails the correlation between COVID-19 and confidence in cryptocurrencies in the future. Surprisingly, Italy, a country that suffered through March due to the raging effects of COVID-19, topped the list in crypto optimism with 72% believing the crypto industry will be alive in 2030.

Netherlands and Poland, closely follow through with 70% of each countries’ population believing crypto will exist in one form or another in ten years.

Spain and Norway close out the top five most optimistic countries with 68% and 67% of the populations believing in the survival of cryptocurrencies respectively.

“It is interesting to see that countries like Italy which have been hit hard by the COVID-19 crisis are expressing more faith than ever in cryptocurrencies. As people face economic hardship, we can expect populations to seek alternatives to traditional financial systems.”

Bitcoin as a payment system across the globe?

The respondents were also asked whether Bitcoin will be able to survive the coming decade and if it can be integrated into the current payment systems. A little less than 10% of Europeans believe BTC will be ingrained into payment systems within a decade. The number boosts looking at Italy whereby over 12% of the population believes the cryptocurrency will be used as a functional payment system in a decade.