ABCC Exchange has listed ATOM on March 21, 2019, with users able to trade the ATOM/USDT trading pair on the Singapore based exchange. Utilizing Tendermint and Cosmos SDK as tools of the Cosmos hub, this project has been closely monitored by the community since its ICO in 2017.

With its innovative technology that has been 5 years in the making, the Cosmos project has shown strong potential to be the “Internet of Blockchains”, connecting all Blockchains in one network. ABCC Exchange has taken this window of opportunity to list ATOM right before the imminent launch of their platform. ATOM is the native staking token of the Cosmos hub, the base Blockchain which all Blockchains will be connected to. As more Blockchains join the Cosmos network, demand for ATOM token is expected to increase.

Cosmos- The Internet of Blockchains

The Cosmos project aims to create an ecosystem that is user-friendly, scalable and facilitates the communication between different Blockchains. To achieve this vision, Cosmos has created open source tools such as Tendermint, Cosmos SDK and IBC (Interblockchain Communication Protocol) Through these tools, developers are able to use existing modules without building applications from scratch. Furthermore, developers are able to code in any programming language of their choice, opening doors for a wider pool of developers to build on the platform.

In addition to being developer friendly, the main aim of Cosmos is to build an interoperable Blockchainecosystem that scales. For this, IBC is used to connect two different Blockchains together. The hub and zone system are implemented to scale the network while maintaining fast transaction speeds. This allows a zone (independent Blockchain) to connect to another zone by only being connected to a central hub.

The Cosmos platform runs on a Proof-of-Stake consensus, with the ATOM token being the native staking token. As more Blockchains are connected to the Cosmos Hub, demand for ATOM tokens is expected to increase as more users desire to stake.

Since its Initial Coin Offering (ICO), ATOM has risen in price from the launch price of $0.10 to its current price of $4.58 (as of 20 March, according to coinmarketcap) Its all-time high price was previously $8.31, shortly after their ICO. With the launch of its Mainnet and future technological developments, the ATOM token is well positioned to perform in the market.

ABCC Listing With Partner Guarantee
Due to Cosmos not launching their Mainnet yet, trades that are executed shortly after ATOM listing will be paper trades. To that end, ABCC Exchange has announced their partnership with credible OTC liquidity providers and a group of investors that have a stake in the Cosmos project.

All ATOM tokens listed on ABCC Exchange will be 1:1 backed by these partners, meaning that users will receive their ATOM tokens on ABCC once token transfer has been enabled. Interested users can trade ATOM tokens here.

ABCC is a cryptocurrency exchange headquartered in Singapore, with subsidiaries in Malta and Gibraltar. Launched only in March 2018, it has achieved high volume in a short span of time, the highest global ranking in volume being fifth overall and first in ether trades. It has a global community worldwide and operates in 12 languages.

Headed by Calvin Cheng, a technology and media magnate, 2019 has seen ABCC Exchange moving towards complying with regulators, by moving their operations to Singapore and applying for Distributed Technology licences in Malta and Gibraltar. 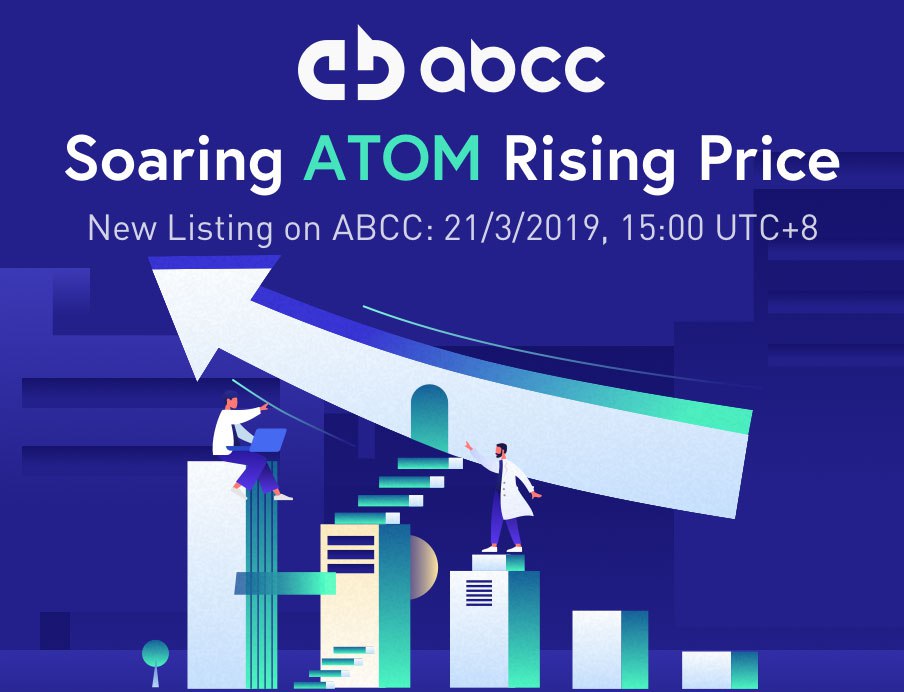 Article Name
ABCC Supports Cosmos Network and Lists ATOM
Description
ABCC Exchange has listed ATOM on March 21, 2019, with users able to trade the ATOM/USDT trading pair on the Singapore based exchange. Utilizing Tendermint and Cosmos SDK as tools of the Cosmos hub, this project has been closely monitored by the community since its ICO in 2017.
Author
Guest
Publisher Name
COINGAPE
Publisher Logo