Investors of the 3rd largest coin by market capitalization, XRP, are petitioning against the parent company, Ripple to stop dumping the coin and manipulating its price. At the time of writing this piece, XRP/USD pair is trading at $0.27 which is considerably lower its all-time high of $3.84 USD in January 2018.

The petition has been started on change.org by a user that goes by the name of Crypto Bitlord. Crypto Bitlord has garnered the support of a sizeable chunk of crypto supporters and they all believe that XRP’s parent company, Ripple, is responsible for a massive market manipulation which has been hindering XRP’s progress. The petition urges Ripple to stop dumping XRP and manipulating the price. It has received an enthusiastic response from XRP enthusiasts and now has over two thousand signatures of the required ten thousand.

XRP enthusiasts are discussing the price manipulation on Twitter as well –

Peter Brant, experienced crypto analyst also expressed concerns that the XRP price might go head down to $0.2 as a result of Ripple’s lavish XRP donations and market dumping. Recently, Ripple was said to have donated 1 billion to Coil amid XRP struggling to keep its head above waters in the crypto markets.

Similarly, another analyst predicted that XRP will most likely depreciate in price significantly before it bounces unto a bullish season.

XRP Coming Back Strong: Another Perspective

According to a twitter user going by the name Welson Trader, a cryptocurrency analyst and investor, XRP is the best performing cryptocurrency over the last decade and shows greater potential for a wide adoption than any other cryptocurrency. The tweet also says that XRP will “outperform bitcoin again” by the end of 2020. 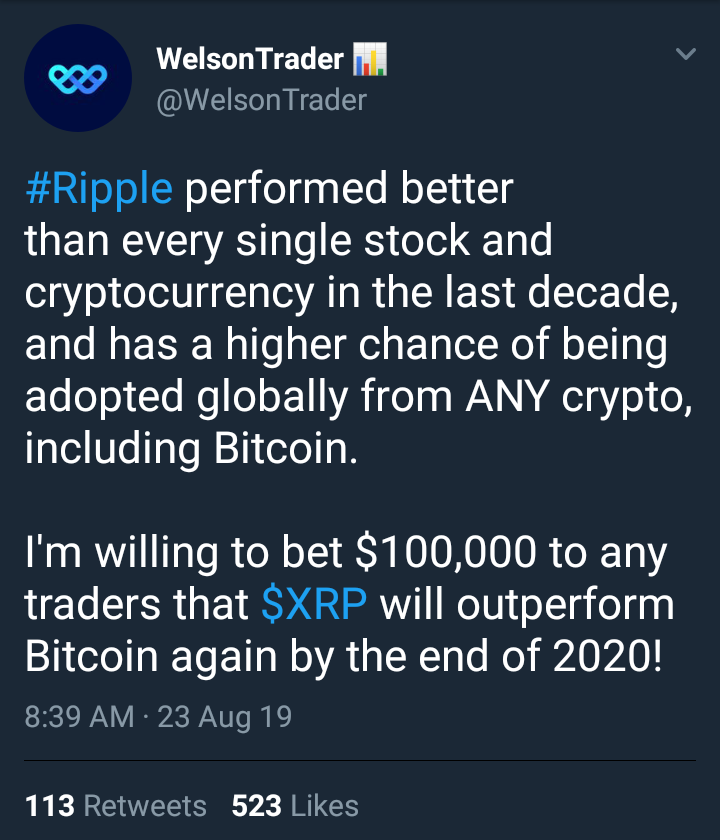 Also, Livercoin, a forex and cryptocurrency trader, predicted on Twitter that XRP will see about 60% dumping before eventually bouncing back to a bullish movement which will finally push the price of XRP.