The United States Securities and Exchange Commission (SEC) is scheduled to draw its final conclusion on VanEck Exchange-Traded Fund (ETF) on 21 May. As the day draws nearer, the cryptocurrency community is curious and asking questions such as what will happen to Bitcoin when the decision is made? A cryptocurrency trader Josh Rager says the decision will have a great impact on the asset.

Josh Rager in a Twitter post said the price of Bitcoin will see a pullback regardless of the current market movement if the SEC outrightly denies the approval. While he did not mention how low Bitcoin will go, he is certain that this will be the case if the ETF proposal does not gain approval. On the other hand, he said Bitcoin will rise to a yearly high if the approval is granted and a mass FOMO will be created as a result. However, a delay is the most likely outcome and this will have little or no effect on the price of Bitcoin, he said.

He had also in an earlier post mentioned that although Bitcoin may pull back slightly if the outcome is a delay, the pullback will be to a support that is already bought up and Bitcoin will likely continue to push through in the next coming weeks to yearly highs all the same.

It won’t be the first delay

The SEC has delayed the decision on both the Bitwise and VanEck ETF proposals since 2018. The commission was to decide on the two applications at the end of March but postponed it to May 16 for Bitwise but no decision was taken. The decision on VanEck was delayed till 21 May, but this time to make a final decision on the application, a move that legal analyst Jake Chervinsky says is unusual. He, like Josh Rager, believes another delay is the most likely outcome. 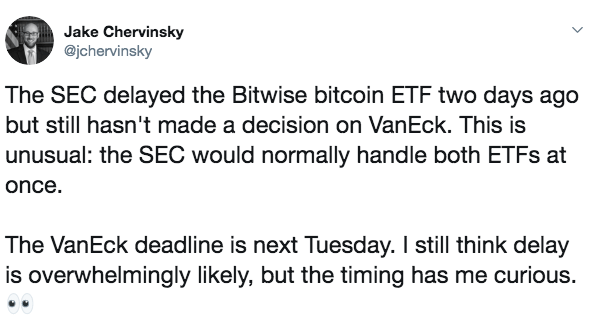 The cryptocurrency industry has been looking forward to an ETF for years as a push for the market. The several ETF delays, however, have delayed this dream but fingers remain crossed as the SEC says it will give its final judgment on VanEck on 21 May, about 24 hours from now. Even though Hester Pierce (“Crypto Mom”) says it is time for an approval, only the final announcement will tell.

Ponvang Bulus
61 Articles
A cryptocurrency enthusiast, author, and investor with high motivation in cryptocurrency/blockchain research and writing. He loves birdwatching and traveling. Follow him on Twitter at @Ponvangbu
advertisement