Bitcoin has been increasing in price over the past 2 days. Analysts believe this present uptrend will usher bitcoin into a massive bull run that will eventually see bitcoin in the $11k zone. Meanwhile, margin traders keep getting rekt on BitMEX as the derivative exchange recorded about $68 million worth of BTC shorts liquidation within the last 24 hours.

Bitcoin In The Past 7 Days

Bitcoin continues to show stronger signs of a bear market recovery after it began to move up the charts about 48 hours ago. In the events leading to bitcoin’s recent rapid bear movements, BTC had dropped in price to fall below the support level of $10k. Further falling below $9.5k on Sunday, BTC was seen to have caught a bearish fever which analysts at the time, believed was pushing its price towards the $8k region.

However, the story changed when Bitcoin suddenly took a turn and started to gain against the USD as it moved up almost 5% within the first 24 hours of such uptrend. Bitcoin continued in this direction for another 24 hours (the 2nd day in a row) and now seems to be heading towards $10.5k. According to statistics by CoinMarketCap, bitcoin now has a market dominance of 70.2%, the highest since December 2017.

Analysts are weighing in on such price actions and are showing optimism about this bull return. According to various analyses, there is a belief that the king crypto can do a lot better in this present bull frenzy.

According to Raoul Paul, Investment strategist and Founder and CEO of Global Macro Investor, it “looks like the last time to board the rocket ship”. While, using technical analysis (TAs) to prove the validity of his claim, he showed that the wedge pattern had a high probability of success. 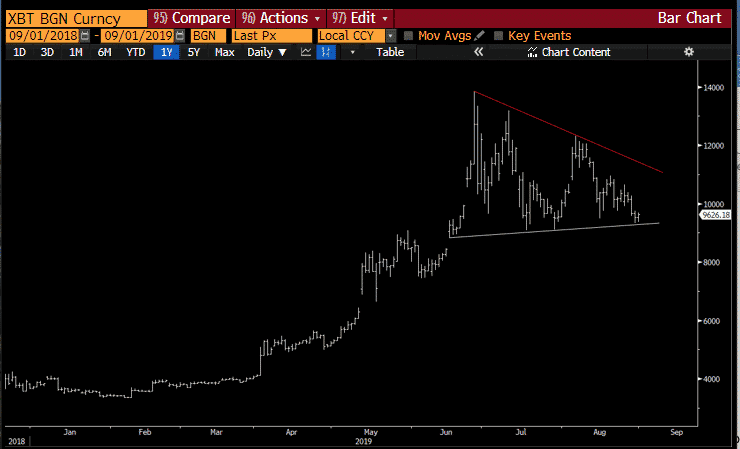 BitMEX Liquidates $68 Milion In About 24 Hours

Margin trading on BitMEX has proven destructive to many traders on BitMEX recently. Within the past 24 hours, more than $68 million worth of BTC short were liquidated on the derivative exchange.

This figure is a lot more daunting when extended in periods to around 7 months. Since the beginning of the year, according to a crypto analyst on Twitter, $5 billion worth of short positions and $9 billion worth long positions have been liquidated on BitMEX.

I predict #Bitmex won’t be around in a few years! ?

On Bitmex in 2019: $5 billion worth of short positions got liquidated on BitMEX vs $9 billion long positions.

Total amount of real funds was $540 million on an average of 25X leverage positions. pic.twitter.com/k5nADAh4NI

What Brought About BTC Price Pump?

As the trade war intensifies between China and the United states, investors are forced to consider safe haven options. Based on the present situation, investors are seeing bitcoin as a shield from the economic uncertainties presented by the US-China tug-of-war.

Also, British investors, in an uncertain situation of what kind of Brexit to expect, are seeking out alternatives that are not correlated with the global politico-economic situation. While the recent event of Sterling shedding 0.62% against the dollar to $1.1991 may not have pushed the bitcoin price, this fall in Sterling is likely to drive investors towards bitcoin.

Lastly, among the most influential factors instigating a bullish signal for bitcoin is the forthcoming Bakkt launch which takes place later in September. With the arrival of Bakkt, physically-settled bitcoin futures will become an actuality. This could propel adoption but could also cause scarcity that might boost Bitcoin prices.

advertisement
✓ Share:
Disclaimer
The presented content may include the personal opinion of the author and is subject to market condition. Do your market research before investing in cryptocurrencies. The author or the publication does not hold any responsibility for your personal financial loss.
About Author
Dare Shonubi
Staff writer at Coingape. Certified cryptocurrency expert and Blockchain journalist covering crypto market analysis and general Blockchain adoption and development. You can follow me on Twitter at @ShonubiDare or reach out to me at dare[at]coingape.com
Twitter LinkedIn

As BTC Surges Past $48,000, Are Bitcoin Whales Playing Pump and Dump?
Handpicked Stories

As BTC Surges Past $48,000, Are Bitcoin Whales Playing Pump and Dump?
Retail investors need to beware as Bitcoin’s millionaire-tier whale addresses might be playing around with them! As per…
Dare Shonubi 247 Articles
Staff writer at Coingape. Certified cryptocurrency expert and Blockchain journalist covering crypto market analysis and general Blockchain adoption and development. You can follow me on Twitter at @ShonubiDare or reach out to me at dare[at]coingape.com
Follow Dare @
Twitter LinkedIn