As bitcoin price and crypto market crashes, the bitcoin miners are forced to shut down their operations driven by the drop in the bitcoin hash rate.

Yesterday, we reported the decline in bitcoin hash rate as bitcoin price tumbled down. In less than a week, the crypto market has lost about $60 billion with Bitcoin and Ethereum hitting their lowest levels since they hit a peak in late December 2017.

After months of low volatility and a boring market, bears entered the market in full force. A liquidity gap of about 30 percent or more has been opened up in these last few days that have left the market in chaos. Bitcoin crashed to $4,230 which has been a 13-month low. If it drops further, it can tumble down to $3k.

However, at the time of writing Bitcoin has been trading at $4,646 with 24-hours gains of about 4 percent. Meanwhile, the hash rate of the Bitcoin network has also declined.

Bitcoin hash rate is still higher than what it has been at the beginning of the year. However, the sharp decline is occurring that was last registered in mid-August this year.

The difficulty to mine is spreading and affecting the most to medium and small miners. This means the mining operations are no longer economical and are forced to shut down. Moreover, many of these miners are also selling their rigs on eBay.

With the prices crashing, it is no longer profitable for miners to mine bitcoin. Hence, the exodus of Bitcoin miners. The smaller miners, especially are expected to find themselves out of the market.

This is presently happening in China as cnLedger reported the shutdown of tens of thousands of bitcoin miners in China as reported by one of the largest/oldest mining pools in China, F2Pool, 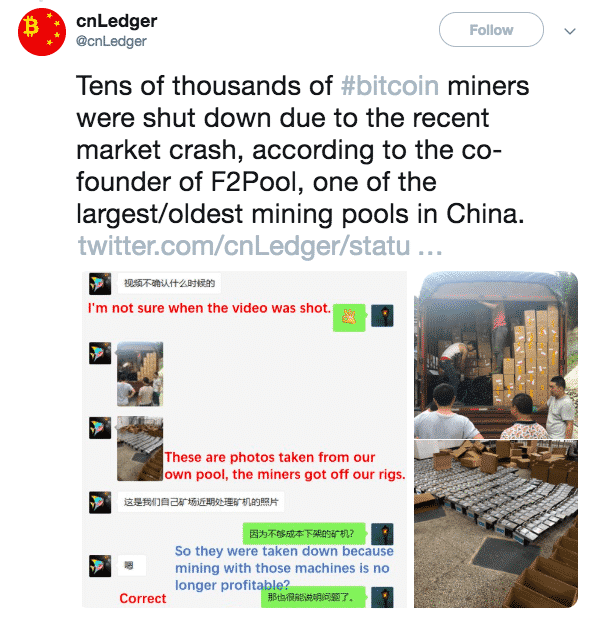 Dovey Wan also shared on Twitter “Basically many miners are mining at loss at the current price point, now it’s more economic to turn it off and take it off from the rack to reduce cost on electricity and opex ..”:

BRUTAL: this is what’s happening now in a China based mining site …. ?? pic.twitter.com/gcN4lVTyBt