Decentralized file storage has long been argued as one of the most potentially groundbreaking use cases for blockchain technology, since it could be used to enable massively scalable decentralized applications (DApps), censorship immune file storage and websites, parallelized big data analysis, and a whole lot more.

Right now, we are beginning to see the decentralized storage industry unfold, and the first apps are beginning to make use of technology. The BitTorrent File System (BTFS) and Filecoin are currently doing the most to push the industry forward, and tackle the challenges of truly persistent decentralized file storage — albeit with somewhat different solutions. Here’s how the two stack up to one another.

What are BTFS and Filecoin?

The BitTorrent File System, or BTFS for short, is a decentralized file storage protocol that uses the TRON network and BitTorrent protocol to produce a highly flexible storage solution that is accessible to anyone.

The platform was designed to provide a high-performance file storage solution that addresses some of the major gripes with current cloud storage solutions, such as centralized trust, potential censorship, low fault tolerance, and high cost. BTFS achieves this through its network of storage nodes, which are maintained by users that want to contribute their excess storage in return for regular payments in the form of BitTorrent tokens (BTT).

Through BTFS, users are able to rent storage space at an incredibly low cost from those with spare resources. These files are split into 30 shards and distributed across the network to host nodes under contract, ensuring redundancy and privacy, while a guard node system works as a second layer of security to ensure files remain accessible even if too many host nodes are unavailable.

As a decentralized file storage system, Filecoin is similar in many ways to BTFS. It uses a technology known as the Interplanetary File System (IPFS) to distribute data between nodes on the network, known as “miners”. Miners are rewarded with Filecoin tokens for contributing their storage space and creating new blocks.

Unlike the BTFS which can be used for storing anything, Filecoin is primarily designed for the storage of highly important information. The pricing for storage and retrieval is set through an open market system, which sees storage providers compete in terms of storage available, speed, and reliability. Like BTFS, Filecoin has a self-healing mechanism in place to ensure files remain available even if miners are unavailable.

BTFS Vs Filecoin: Which is Better?

BTFS and Filecoin are similar in more ways than one, but it is hard to argue that they are equal. Though Filecoin has been in development for longer, BTFS has quickly emerged as the more viable solution for most use-cases and has gained what may now be an insurmountable early mover advantage over Filecoin.

For one, BTFS is live and ready to use on its mainnet now. This launched earlier this year, and the platform has already managed to onboard well over 300,000 active monthly users, with the total size of the storage network growing by around 3 TB each day. Conversely, Filecoin has been in development since 2017 and raised over $200 million in an initial coin offering (ICO), but has failed to go to mainnet on more than one occasion. Because of this, Filecoin has already lost significant market share, and will likely be playing catchup to BTFS if, or when it eventually goes to mainnet. 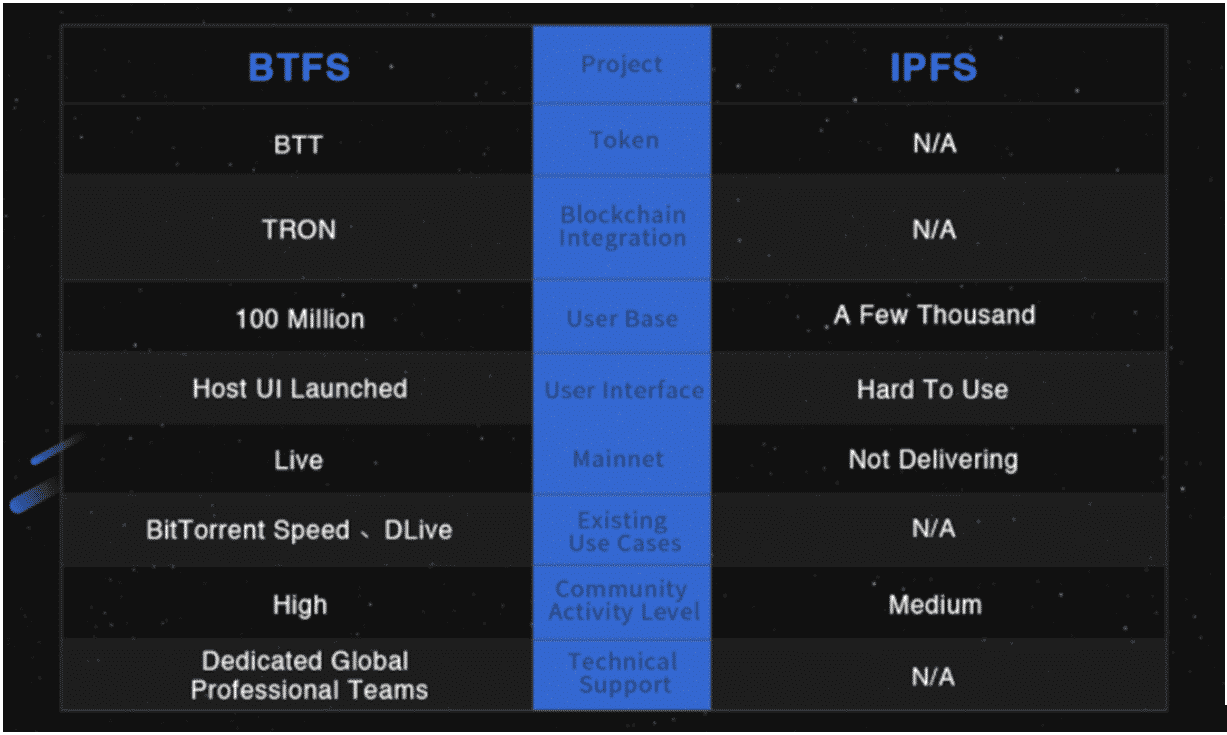 But perhaps the most disparaging news for Filecoin is that a group of miners and VCs in China recently announced plans to fork the Filecoin blockchain prior to its launch — in the expectation that the rewards users will receive on the original chain will be insufficient to maintain profitability, while initial pledge collateral requirements raise the bar to entry, potentially slowing growth of the network. Likewise, nodes will also have to complete identity verification to contribute resources and earn tokens — unlike BTFS hosts.

Overall, BTFS has already demonstrated a working incentive model to balance low costs with great rewards for storage nodes, and the number of both nodes and storage renters is growing rapidly as a result. Due to its low barrier to entry and the huge number of potential applications it has, BTFS appears to be the superior platform right now.