Cryptocurrency exchanges are a very important element of the cryptocurrency industry as they not only facilitate the sale and purchase of crypto assets but also provide critical insights on how the industry is moving forward. While there are hundreds of exchanges across the globe providing various functionalities and products, CryptoCompare’s recent report gives a consolidated account on how these exchanges are playing out.

Kraken, Bitfinex, and Bitstamp continue to remain the most stable exchanges

As part of its monthly exercise,  CyptoCompare, recently released its report on Cryptocurrency Exchange for the month of December 2018 with an aim to review and capture the key developments within the cryptocurrency exchange market. The research conducted, tried to focus on analyses that related to exchange volumes, and included an overview of current exchange market concentration, an analysis of the highest volume producing jurisdictions, as well as market segmentation by exchange fee model. The findings of their report provided some great conclusion which could play a huge part in shaping the future of cryptocurrencies.

According to the report, the market for cryptocurrencies exchanges is fairly concentrated and nearly 60% of the spot market volumes come from these top 10 exchanges. 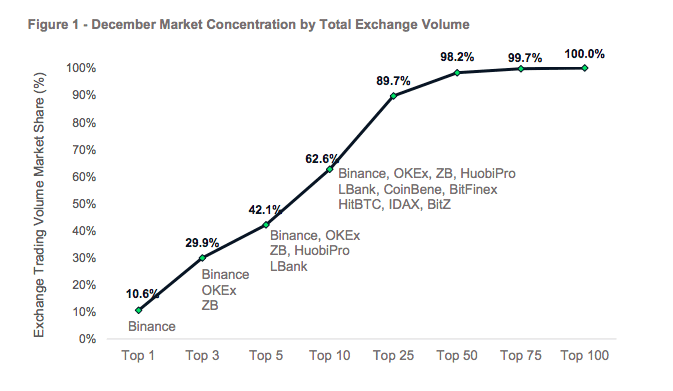 Geographically, most of these volumes come from Malta, the small island nation that is home to some of the great exchanges such as Binance and OKEx.  Malta is followed by Hong Kong and Samoa which drive the global crypto volumes. The report interestingly finds out that, in recent months, the monthly trading volume from Malta has fallen by 9% while from there has been a rise of 2% and 3% from Hong Kong and Samoa respectively. 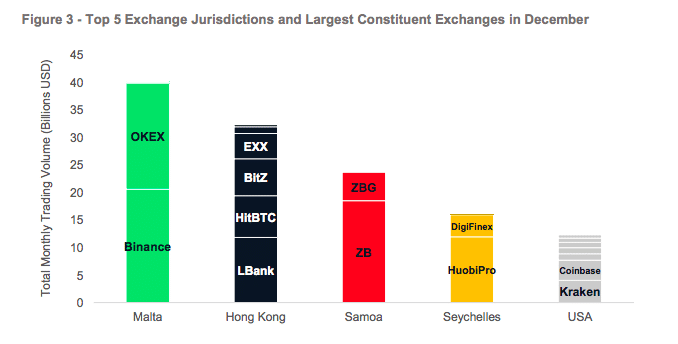 Exchanges that offered fiat pairs represented only 25% of spot volume in December 2018 while 57% of all the fiat trading was done in USD.

With respect to future trading, the exchange mentioned that

“The proportion of futures trading volume increased from 22% in November to 28% in December. BitMex XBT perpetual futures volumes increased 17.7% in December while XBTUSD futures of CME and CBOE decreased 45.5% and 48.0% respectively since November. Regulated exchanges (CME and CBOE) represented only 2.88% of the total crypto futures market in December.”

The report also gave an insight about stablecoins which stated that Tether (USDT) continues to represent the majority of Bitcoin trading into fiat or stable coins at 65% of the total monthly volume in December. 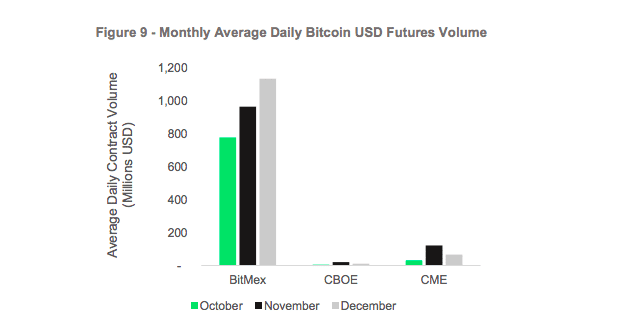 Among the rankings, the top three exchanges that held the Top exchange volumes were, Binance followed by OKEX and ZB. Amongst Trans-fee Mining Exchanges CoinBene was the largest TFM exchange in December followed by ZBG and EXX.

Bitfinex, Kraken, and Bitstamp maintained the most stable markets in December while exchanges CoinBene, Bitforex, IDAX continued their tabletop positions for DEX’s by volume. Among other parameters Ethermium, WavesDEX and IDEX occupied the top spot to provide most volumes by a DEX.

The analysis and result provided by CryptoCompare’s research bring out some exciting facts which may be critical in shaping the future of the crypto industry.

Will Centralized exchanges continue to rule the roast or will DEX’s soon take over? Do let us know your views on the same.