Tron has exceeded 1 million daily transactions while growing its total number of accounts and online nodes. The 11th largest cryptocurrency is on its way to surpass the combined daily transaction volume of top three cryptos i.e. Bitcoin (BTC), Ethereum (ETH), and XRP.

The 11th largest cryptocurrency has broken its own records by exceeding 1 million daily transactions recently. Tron founder and CEO Justin Sun took to Twitter to announce this accomplishment:

On November 4, Tron recorded the highest number of daily transactions at 1018795. While the lowest number was recorded on June 29 at 1397 as per Tronscan.org.

Soon, Tron will be able to surpass the combined daily transactions volume of top three cryptos viz. Bitcoin (BTC), Ethereum (ETH), and XRP as pointed out by a Tron enthusiast,

Tron has already left Ethereum behind and in order to celebrate this achievement, as Sun has Tweeted a few days back, 1,000 TRX will be rewarded to each of the five winners,

Apart from daily transactions, Tron is constantly growing its addresses and nodes. With a block height of 3816367, the total number of accounts has reached 563823 while the online nodes are already past 1k at 1130.

Also, Ashburn, where 70 percent of the world’s online traffic goes through has the majority of the active TRX nodes.

Tron community is excited about this achievement as one Tron enthusiast shares,

“Congrats @justinsuntron you have been able to accomplish so much in such a short period of time. I can’t wait for the end of Q4 and what 2019 brings. I smell Top 5 by EOY 2019.”

At the time of writing, the $1.5 billion market cap cryptocurrency has been trading at $0.0235 with about a 4 percent surge in the past 24 hours. 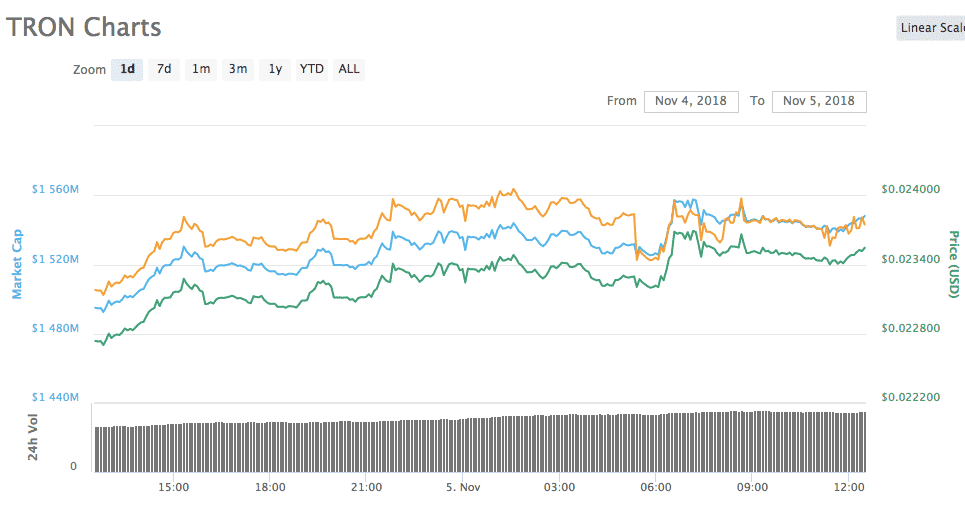 The positive and developing news along with a momentum in price has the Tron community excited and anticipating TRX to hit $1 soon.