When Justin Sun and his team launched Tron in 2017, they rolled out an ambitious roadmap meant to “Heal the Internet.” The team’s goals were clear. Through the Tron dapp ecosystem, content providers would interact with their customers directly. Data would be distributed freely and in an uncontrolled manner and developers would get a platform to create dapps easily.

Nearly two years since the platform launched, Tron coin is ranked among the top 10 coins based on market cap. In terms of Tron Dapp Development, More than 250 dapps are built on the platform and the Tron team has achieved several of the major milestones set out in the Tron whitepaper.

Below we explore all the essentials of the Tron dapp development ecosystem, what they are, and how they work.

System requirements for the Tron studio are a Linux 64 bit computer, Mac or any Windows 64bit version. The Tron studio is powered by Oracle JDK1.8 and should not be opened using Open JDK.

Tronscan is a block explorer for the Tron ecosystem. It’s the equivalent of Ethereum’s Etherscan. With Tronscan, you can search for transactions, addresses, and blocks created on the Tron blockchain. The platform can be found on tronscan.org.

Although tronscan is mainly used for searching transactional data related to Tron, you can do more than that. When you create an account on Tronscan.org, you are directed to import your Tron wallet from Ledger. If you don’t have one, you are directed to create a free Tronlink wallet designed as a Google Chrome browser extension. Developers can also add the extension to their websites and use it when creating dapps.

On the website, you can use your account to send and receive TRX coins. You can also vote on who should represent you (Super Representatives) as a community member when matters pertaining Tron are discussed. You must freeze your coins in one wallet to vote on SRs.

Tronscan has a friendly GUI and will help you explore all sections of the Tron ecosystem. If you are a developer, the bottom menu of the website lists some of the most important tools and kits you will need.

Tron Station: What is it?

The web app’s interface is simplistic and contains all the information needed to calculate energy or bandwidth. It’s divided into three major menus: the dashboard, calculators and the SR vote reward.

On the upper left side of the dashboard is a graph of the price of energy in sun tokens (1 TRX = 1000000 SUN) for one month. On the right side are the data for calculating energy and bandwidth. This includes the Freeze energy price, the burn energy price and total votes at the time.

The Tron station calculators are straightforward. You calculate the energy by entering the number of TRX coins you have. One TRX represents roughly 200 ‘energy by freezing TRX’ at the time of writing. One TRX equals 100,000 ‘energy by burning TRX.’

Shasta is the gateway to TRON’s private test network. It’s useful for developers that want to build Tron dapps without compromising the security of their projects. If you use the cloud when developing, Shasta helps you access Tron’s development tool kits easily and securely. SHASTA is a private company though and is not owned by Tron.

Last year, Tron users received news that a decentralized marketplace for Tron coins was on the way. It didn’t take long for the exchange to launch. Named Tron watch market, the DEX launched in October as a collaboration between Tron watch and SesameSeed. The goal of the exchange is to allows users to trade TRX coins for TRC20, TRC10 coins and all other tokens affiliated to Tron.

It’s free to trade coins on TWM. Tron developers with tokens paid using TRX can also list them on the marketplace. If they are lucky, voters can rank these tokens on the TWM homepage and boost their liquidity.

Lots of wallets support Tron these days. Most of them have no links to the Tron development team. So, if you choose to download a wallet there, make it your responsibility to pick a good wallet. That said, Tron also has an official desktop wallet that only supports Tron and a few other tokens. You can also use TronLink as your preferred wallet for TRX coins.

TronLink is a crypto wallet and came out earlier than the Tron watch market. It’s an open source project developed as a Google Chrome extension for ease of use.

As a wallet dedicated to Tron, it has several unique features not supported by many wallets. For example, you can freeze your wallet and vote without leaving the platform. It also supports a special page for super representatives. 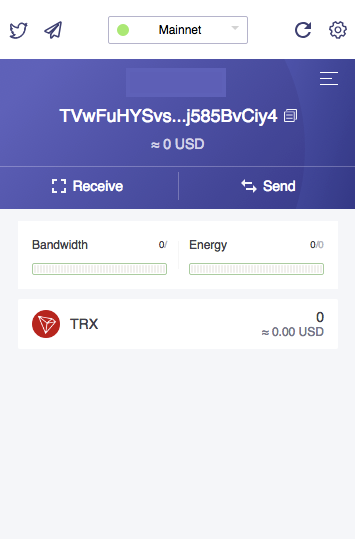 Math wallet is one of the few successful crypto wallets that supports the cross-chain transfer of tokens without the need for an exchange. It supports all major coins, including bitcoin, Ethereum, NEO, EOS, and Tron. The wallet is available for both the web and as an app for Android and iOS devices.

With its multi-signature feature, the wallet ensures that losing one password doesn’t mean the loss of your coins. It’s also integrated with PayPal and has APIs to help Tron developers add its apps to their websites.

Guildchat is one of the most unique crypto wallets. It was developed by a company named BitGuild to help steer the adoption of cryptocurrencies. The wallet went viral last October after it began giving away TRX coins to whoever joined its community.

The whole idea of GuildChat is to help crypto users send and receive coins in a simpler way. If you would like to send some tokens to a group of friends, the app has a feature called coin drop that helps you do just that. GuildChat also has social features to give its communities reasons to use the app even when they are not sending or receiving crypto.

TRON is one of the fastest growing dapp ecosystems. Like Ethereum, TRON comprises of a large network of developers, inventors, and traders. TRON does its best to provide developers all the tools they need to build apps and deploy them successfully. From Tronscan to Tron studio, everything on Tron is purposefully geared at helping users have a great experience on the network.