Tron Independence day has finally arrived and currently streaming live. With the D-Day here and crypto market enjoying the greens, what is TRX price really in for.

A journey of the “Free, Decentralized Internet” starts now!

The day has finally arrived and Tron Independence is currently ongoing. By separating from Ethereum blockchain and moving to its own, Tron would officially become a “free, autonomous, and self-governed decentralized protocol with robust community consensus.”

Tron will migrate from ERC-20 and become “one of the most globally competitive and well-governed major public blockchains.” Justin Sun, its founder, and CEO took to Twitter to announce the live stream of the D-Day. 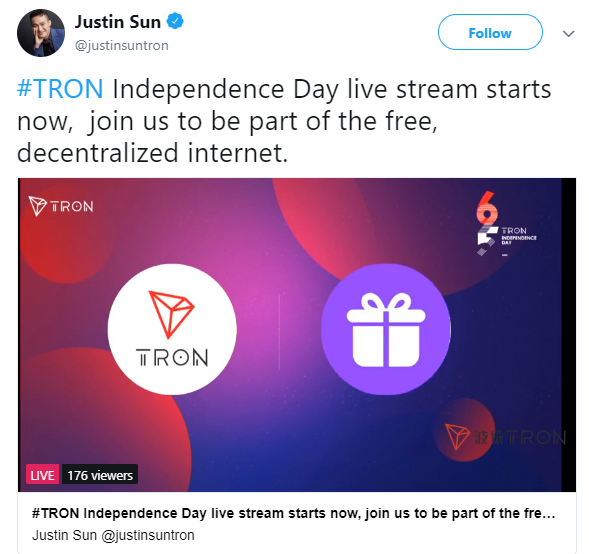 On the big day, Justin also shared a Tron giveaway during the live stream to celebrate such a day with the Tron community.

Tron price on the go, what is it in for?

At the time of the writing, Tron (TRX) price has been at $0.041 with a rise of 3.85 percent in the past 24 hours. The coin has retained its position at 9th spot despite the crypto market taking a serious dip in past two days.

With a market cap of $2.7 billion, Tron is currently managing the daily trading volume of about $191 million. The last week had been a pretty hopeful one as it reached $0.05 at one point before taking several dips along the week.

The week has started on a good point for Tron as today it gets its independence and moves to its own blockchain. Also, the prices have started on a decent green note that is compensating for no signs of any spike during the mainnet launch. Bulls can be seen in the market for right now as the majority of the cryptocurrencies are in the green and many are experiencing huge spikes.

Also, the decision to burn 1,000,000,000 TRX all at once will reduce the total availability of the TRX tokens in the market. This, in turn, will reduce the supply which would directly affect the prices positively. It is expected that in a combination of these events, Tron price will see a surge and rise to $0.1. The market might even see TRX price to well above its highest January point of $0.2 as it moves along in its development.

Tron Independence Day is currently running live and prices are surging as well. So, for now, we just have to wait and see how far the prices shoot up.

What are your views on Tron Independence Day? Do you think TRX prices are up for a hike and make new records? Share your thoughts with us!