Sun, kept the details of partnership secrete but his Tweet engagement speaks that the Liverpool FC has officially invited Sun to join hands and leverage TRON network (more possibly). Nevertheless, Sun shared a Thank you message and notes that he is looking forward to TRON’s new partnership together. Here goes his tweet;

While details are behind the scene still – Twitterati are eyeing on what new partnership might bring to the world of TRON crypto and blockchain because Liverpool FC or Liverpool Football Club competes in the Premier League and it is a professional football club in Liverpool. However TRON proponent, Misha Lederman gave a clue that the TRON logo appears on the red LFC Shirt at Anfield. 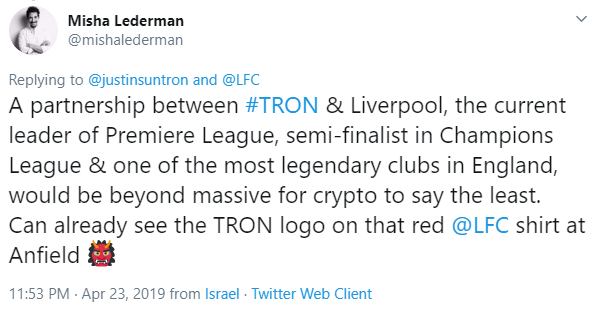 Moreover, he further believes TRON and BitTorrent will help Liverpool if they could use their own live streaming option in the near future. However, TRON isn’t the first cryptocurrency that has achieved mainstream attention from a major player like Liverpool Football Club of England, Litecoin has already marked its recognition in one of the leading mixed martial arts organizations, UFC (Ultimate Fighting Championship).

On top of all, looking at the graph of Coinmarketcap, the partnership clue doesn’t influence the price of Crypto as expected – In fact, TRX is declining lower with 8.29 percent within 24 hours. As such, the 11th largest cryptocurrency is trading at the value $0.023 against US Dollar and subsequently, appearing with the average trading capitalization of $1,542,644,088.

What’s your stake on TRON’s new partnership with Liverpool Football Club.? Let us know what do you think the partnership will have new for TRON network?