The value and impact of data is clear. People are aware of how expensive data is and the value it brings to the world’s most valuable companies. Increasing regulations have begun to push towards a more ethical, transparent system due to increasing privacy concerns and prominent data scandals, but alternatives are needed for a future driven by data. Swash is pioneering a new way of doing data by bringing control and data monetisation to the masses through what can be understood as a Universal Data Income.

Data Monetization for the Masses

Swash is an ecosystem of tools and services that enable people to unlock the value of data by pooling, securely sharing, and earning while retaining privacy. The core idea behind Swash is that of “Data Unions” – organized structures that optimize individual agency as a collective force by rewarding union members for the value of their data. Inspired by their vision to make easy data monetization possible, the Swash team built the first real Data Union back in 2019 as an experiment. It has since grown into one of the largest dApps with over 60,000 installs, making it the largest Data Union in existence.

It was recently announced that Swash raised $7 million in a funding round, led by the popular cryptocurrency exchange KuCoin, early-stage accelerator Outlier Ventures and decentralized real-time data platform Streamr. Outlier Ventures’ portfolio boasts big names, such as Brave, Chainlink, Ocean Protocol and Fetch.ai, and Swash partnered with them in summer 2020. Streamr’s technology enables the creation of Data Unions and Swash utilizes the network as the integration layer and the Streamr marketplace will be where Swash stream data is sold. Streamr Founder, Henri Pihkala, is also on the Swash advisory board.

Swash also partnered with Ocean Protocol as a Day 1 Data Launch Partner of the Ocean Market, which enables users to add liquidity to pools, and to buy, sell, or publish data. Swash received from Ocean a funding grant plus marketing and product development support, and Bruce Pon, Ocean Protocol Founder, is now an advisor to the team. For more, the Swash team recently published in a blog an impressive list of all-star backers.

The SWASH Token — Powering a World of Data

As Swash will grow, the solutions built onto the technology will give rise to a vast community of collaborators and new innovations. Its First Wave Solutions can provide an indication of what is possible. These include: Data Union – organizing individuals as a collective force so people can earn for activities they already do online — like surfing the web. sIntelligence – a unique business intelligence platform using aggregated Swash data to show companies their key metrics via a web-based platform. sApps – making it possible to communicate directly with users to get to know them better and provide another value stream, such as by viewing ads or answering questions or polls. sCompute – making it possible for data scientists to perform computations on data without needing to purchase it while the data itself remains private and isn’t sold or moved. 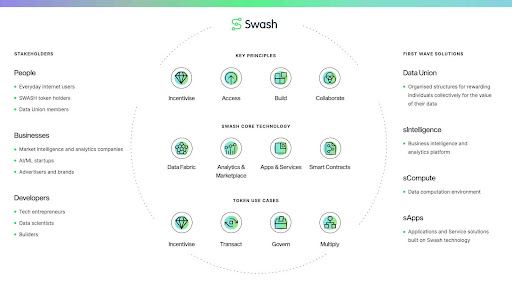 The Swash value chain will be powered by its native token (SWASH). SWASH will have a variety of use cases within the ecosystem and will be used as a cross-chain utility and governance token integrating Ethereum, xDai and Binance Smart Chain. It will also be fused with Swash’s partners and their native currencies, allowing for cross-fertilization of value, increased adoption, and a seamless user experience. As demand for SWASH will increase alongside network adoption, generated value may be used to balance the token supply, likely through periodical token ‘burning’. Once the Swash expansion is live, use cases for the Swash token will include: an incentive system, data transactions, DAO governance and staking liquidity.

This is your chance to change the future of the internet and help bring about a world where users monetize their data, not the big tech monopolies. You no longer have to imagine a system where users regain data ownership and receive passive income as they surf the web or collectively invest value into social development – Swash makes this a reality now!

Having recently raised $7 million from a slew of leading VC firms and being named one of Coinlist Seed’s Fall 2021 Batch selections, Swash is currently gearing up for its public sale on the Gnosis Auction platform on October 29. Those keen to participate must whitelist and complete KYC before October 25 or when 20,000 places have been filled, whichever comes first. Over 78,000 people have already downloaded Swash’s browser app, showing a clear product-market-fit and demand. If it succeeds, a better and fairer internet might just be the outcome.

✓ Share:
Disclaimer The presented content may include the personal opinion of the author and is subject to market condition. Do your market research before investing in cryptocurrencies. The author or the publication does not hold any responsibility for your personal financial loss.
Stan Peterson
579 Articles
Being an active participant in the Blockchain world, I always look forward to engage with opportunities where I could share my love towards digital transformation.
Similar Post