Upbit exchange officially announced on its platform that it is undergoing investigation, though services are allegedly operating normally. Given the way the market is responding, crypto investors are already affected by the news. Reportedly, Upbit is suspected of fraud that might lead to severe consequences.

After the entire day of chaos surrounding South Korea’s largest cryptocurrency exchange Upbit regarding the officials raiding its headquarters in Seoul, the exchange has finally made an official announcement.

So, now that it is confirmed that Upbit is under investigation, let’s understand its implication and how exactly it all started?

In the afternoon, when the news of raid entered the market, Upbit has been at the 4th spot in the top cryptocurrency exchanges with a 24-hour trading volume of $1.8 billion as per Coinmarketcap. Now, within hours, Upbit has gone up at the 3rd spot with $2.2 billion trading volume. 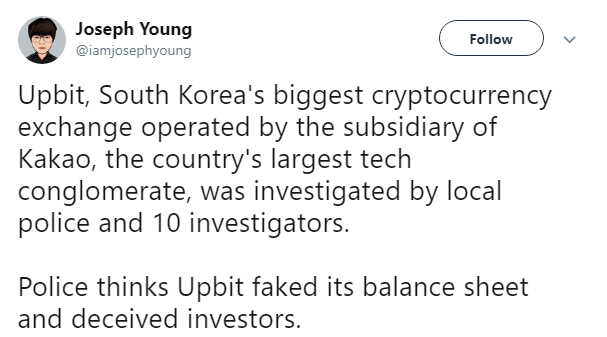 Talking about how it all started, for the past few months, South Korea has taken a strong stance and introduced tough regulatory rules to clampdown on the cryptocurrency exchanges in the wake of the rising frauds and scams.

In March, it has been confirmed that South Korean Prosecutors raided three crypto exchanges in the previous month that involved confiscation of financial record, computer hard drives, and mobile phones.

At that time, the prosecutor stated that the three-day raid took place in South Korea’s capital, Seoul. The exchange executives among other staff have been suspected of clearing money from their customers’ accounts and then using it to purchase cryptos at other exchanges.

The prosecutor involved in the investigation said the firms turned up on their radar in January for suspicious transfers between bitcoin exchanges. This was the time when the Financial Services Commission (FSC) got involved.

Reportedly, about $637.5 billion won has also been exchanged illegally in foreign currencies which further resulted in the ban of cryptocurrency trading involving unidentified accounts.

So, Upbit is not the first exchange to capture the attention of authorities. However, being world’s 3rd largest and South Korea’s biggest cryptocurrency exchanges make it a high profile case.

Since its inception in October 2017, Upbit’s image hasn’t’ been all clean as in December, the crypto exchange became the center of the controversy when it didn’t join other exchanges to support self-regulation.

A point worth noticing here is that Kakao, the South Korean Internet giant is behind this exchange. Upbit is also in partnership with another cryptocurrency exchange, Bittrex which is also under the top 10 crypto exchanges as per 24-hour trading volume with close to 300 cryptocurrencies listed on its platform.

The exchange also experienced numerous issues like loss of funds and transaction errors last year. One of its users claimed:

“This is not a server problem, but a manipulation. If you look at the transaction history, the unit price is not correct.”

Now, the exchange is being investigated by the local police for the illicit moving of customer funds to its executive account. Given the way, one of the leading crypto exchanges, Coinnest’s CEO has been arrested for embezzlement of funds, Upbit will have to go through audits and a lot more.

Though the authorities have yet to give their final report, if evidence is discovered against the exchange, it could be shut down either temporarily or permanently.

Being the largest crypto exchange in South Korea, if it gets shut down, the consequences could be severe. Given the fact that market is already in red, this news can further affect the prices negatively meaning we will be seeing more drop in the crypto prices.

Do you think Upbit being under investigation would hit the market more severely? Are we in for a bloodbath? Share your thoughts with us!

Peter Schiff calls MicroStrategy’s Saylor “mad” for trying to Pump Bitcoin
Peter Schiff, the CEO of Euro Pacific Capital and a known gold enthusiast has taken to Twitter against…

Bitcoin (BTC) Closes 10 Daily-Green Candles in a Row After 4 Years, Price Soars to $42K
Bitcoin’s (BTC) price soared above $42K earlier today for the first time in a month as the top…
Casper Brown 374 Articles
I am an associate content producer for the news section of Coingape. I have previously worked as a freelancer for numerous sites and have covered a dynamic range of topics from sports, finance to economics and politics.
Follow Casper @