SWIFT being pressured by US govt. to remove Iran from its network

According to the latest reports, US Treasury Secretary Steven Mnuchin said the Treasury is in negotiations with the Belgian-based SWIFT. The financial messaging services company that basically facilitates a good chunk of the world’s cross-border payments is being pressured by Washington to cut its ties with Iran and remove the country from the network. Just like in 2012, before the nuclear deal.

Though the United StatesUnited States does not hold a majority on the SWIFT’s board of directors, Reuters reported the Trump administration could impose penalties on the system until it does disconnect Iran from the network.

Though Munchin didn’t provide any details of the talks with SWIFT staff, he did share the Treasury Department would identify those banks that would be allowed to process transactions for Iran regarding humanitarian funding “as quickly as possible,” as he says:

“We want to get to the right outcome, which is cutting off transactions.”

In August, this year, Heiko Maas, Germany’s Foreign Minister called for a system similar to SWIFT, independent of Washington.

While Iran believes it can ward off the economic damages from the US sanctions, Munchin predicts a rather significant impact on the country’s economy as companies i.e. major ones exit the Iranian market for fear of retaliation from the US.

“We have already begun to see the impact and my expectation is we will see a significantly larger impact once the sanctions go into place,” he said, “The economic squeeze will be very big over the next two years.”

Iranian currency tumbles down, time for Blockchain & crypto to shine?

On removal from SWIFT, the demand for alternative transaction systems such as the ones offered by blockchain companies will work best in filling that gap. Reportedly, Iran and Russia are already looking at blockchain-based solutions as an alternative to SWIFT.

As usually happens, in anticipation of the US sanctions, the Iranian currency, Rial took a tumble in the black market that provoked several protests. 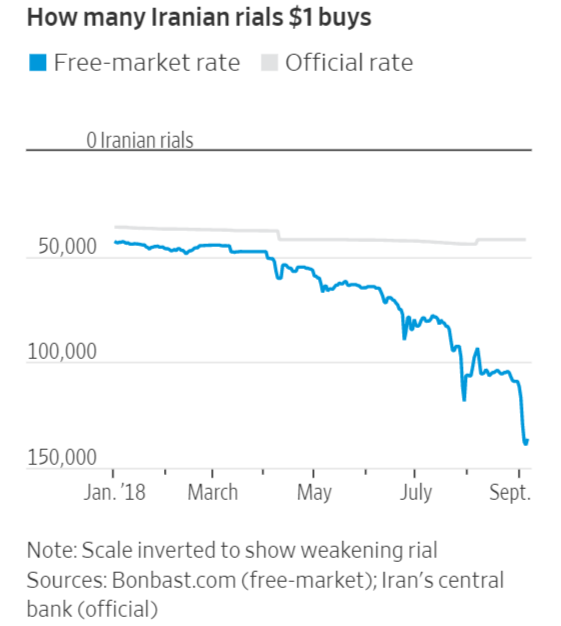 This could be an opportunity for the cryptocurrencies to make its solid presence in the country. Though for now according to the coin.dance data, the volume of Bitcoin is still limited and significantly small, incidents like these can surely help driving the demand upwards.

Do you think the US negotiating with SWIFT to remove Iran from the network will work in blockchain-based payment solutions and cryptocurrencies?