The 20th largest cryptocurrency has reached the milestone of 1 million clauses while shining in China by demonstrating at the first China international expo. Meanwhile, VET prices are in the red ta $0.0101.

VeChain in the Limelight

According to the data provided by VeChain Explorer, VeForge, VeChain has stricken a record by registering 1 million clauses. With 615.9k total transactions, at the end of last month, VeChain registered the highest transactions and highest clauses at 14k in the past two months at least.

In its official blog, VeChain while explaining VeChainThor blockchain transaction model, had shared, “Each transaction may contain multiple clauses, and each clause contains the “To”, “Value”, and “Data” fields that can be used to commence different tasks such as payment or smart contracts.”

In more simpler words, Redditor, Kogsi explained clauses, “Like, Instead of everyone driving with a separate car to the same destination, they use a limousine and drive together for less costs.”

To execute clauses Gas is paid which according to VeChain is the “maximum amount of VeThor the sender is willing to pay to execute all the clauses in the transaction.”

Additionally, “Clauses field is a set of single clauses. This allows a single transaction to have multiple outputs. The Clauses system yields flexibility and power beyond other blockchains.”

Clause accommodates both the requirements i.e. transaction dependency or independency. Also, it processes tasks one by one in the order defined by Clauses field for proper execution.

With over 1 million blocks at 1,151,685, it has about 61,526 accounts. Moreover, VeChain has already burned approximately 29 million VTHO. As for the transactions, 187 billion VET and 4.1 billion VTHO has been transferred.

On another front, VeChain has been creating its presence in the Chinese market. Recently, VeChain demonstrated in the China International Import Expo that was attended by government officials, business communities, exhibitors, and professional purchasers from 172 countries and regions.

The official announcement shares that VeChain detailed its various partnerships during the event. VeChain’s CEO Sunny Lu explained, “the ‘My Story’ and cold chain logistics solutions co-developed with DNV GL, which can significantly protect the quality of imported seafood products and enhance the customer experience and food safety.”

When it comes to price, for the past one month, the prices of VeChain (VET) has been constantly on a downward movement as depicted in the below given 4 months chart. 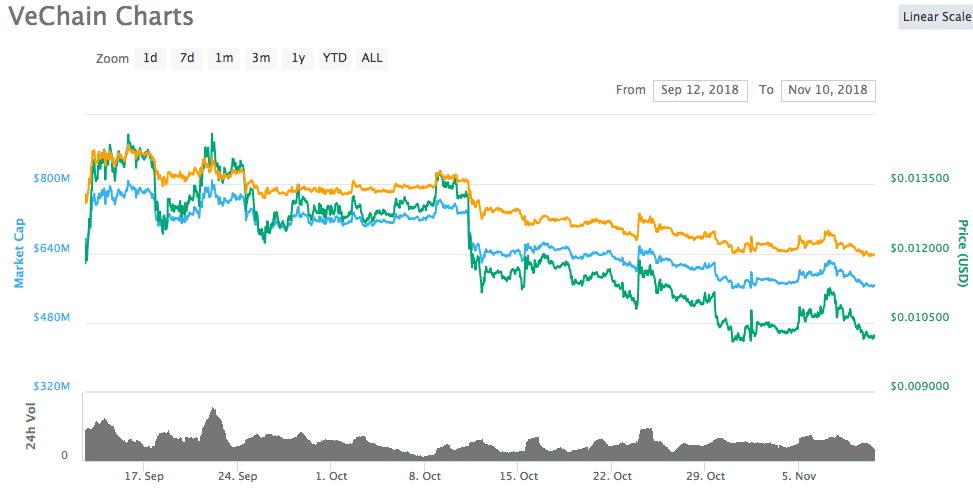 At the time of writing, the world’s 20th largest cryptocurrency has been trading at $0.0102 while registering 24-hours losses of 0.25 percent. With a market cap of over $563 billion while managing the daily trading volume at $8.6 million.

advertisement
✓ Share:
Disclaimer
The presented content may include the personal opinion of the author and is subject to market condition. Do your market research before investing in cryptocurrencies. The author or the publication does not hold any responsibility for your personal financial loss.
About Author
Ashutosh Singh
Ashutosh Singh from Computer science background is a full-time content writer at Coingape. His passion lies in writing and delivering apt information to users. Currently, he does not hold any form of cryptocurrencies. Reach out to him at [email protected]

Ashutosh Singh
13 Articles
Ashutosh Singh from Computer science background is a full-time content writer at Coingape. His passion lies in writing and delivering apt information to users. Currently, he does not hold any form of cryptocurrencies. Reach out to him at [email protected]