Cryptocurrency and sports are often getting the mainstream attention, with Litecoin’s logo debuting at Ultimate Fighting Champion (UFC), Liverpool FC’s partnership invitation to TRON and Binance. Yet another related story broke the headline today.

West Ham United Football Club is partnering with blockchain based project, chiliZ. The Premier League club with chiliZ’s tokenized voting platform ‘Socios.com’ will launch a club-branded fan token via Fan Token Offering or FTO in early 2019/20 season. The announcement was released on April 30, 2019, by West Ham’s official website. Per the release, 40 million fans of the London-based football club will get the power to vote on selected club decisions. Beside vote, one can also earn rewards.

Fan Token Offering by West Ham with Socio will enable the club to interact with fans and obtain more transparent feedback in real time. Accordingly, Karim Virani who is the West Ham’s Digital & Commercial director shared his confidence in a similar tone.

West Ham United’s presence on Socios.com’s state of the art platform will further give us the ability to interact and get direct feedback in real-time from our global fanbase.

chiliZ, a sports blockchain venture is backed by industry leaders like Binance and OKEX cryptocurrency exchange. Nevertheless, Binance CEO also expresses his excitement towards the project and said; 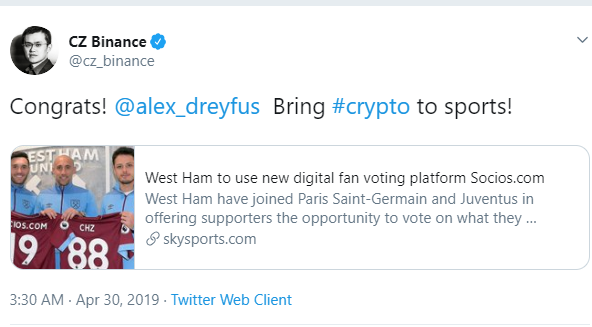 Thanks. Step by step. Block by block.

Upon the launch before this summer, fans can visit Socios.com mobile app or directly on crypto exchanges to purchase Chiliz’s native cryptocurrency CHZ – this currency will later help users to buy fan tokens in Fan Token Offering. Such tokens will then be traded among peers on the Socios.com mobile app.

Per the reports, these tokens are more like cryptocurrencies wherein its value fluctuate based on the market demand and the performance of the club. Moreover, these tokens on Socios platform operate on a permission side-chain network which bids authority to each participating chiliZ soccer club.

“We’re proud and excited to have West Ham United as our first announced Premier League partner. said CEO of chiliZ. Working with West Ham United is a big step in realizing our goal of building the world’s biggest global football community and marketplace for football fans on the blockchain, alongside demonstrating that our platform and cryptocurrency is the trusted technology of the mainstream sports fan.

So readers, what’s your stake on Socios and West Ham football club.? Let us know in the comment below

XRP Price Prediction: XRP Struggles At $1.1 As The SEC Denies Ripple To Documents In Lawsuit
XRP price struggles to sustain around $1.1 amid bearish calls that risk another drop to $0.92. The US…
Tabassum 562 Articles
Tabassum is a full-time content writer at Coingape. Her passion lies in writing and delivering apt information to users. Currently, she does not hold any form of cryptocurrencies. Follow her on Twitter at @Tabassumnaiz and reach out to her at Tabassum[at]coingape.com
Follow Tabassum @
Twitter