Ever since the beginning of the Ethereum revolution, a promising field for Blockchain has been in the advertisement world. The hype surrounding the possible applications of the technology in the marketing business started early in 2018. Yet, three years later and it seems nothing of the initial push has given way to concrete initiatives and Dapps.

Transparency was always the focus and the primary use of a decentralized ledger in the marketing world. This is where those early projects decided to focus their energy and resources. The boundaries of what is possible seem to be shifting, and Blockchain is the primary driver of innovation.

If we follow the Gartner’s 2019 Hype Cycle for Decentralized Ledger Technologies, we can read that advertisement won’t be impacted by Blockchain until the mid-2020s. Then, could it be that it is still early for the technology to make inroads in the ad world?

Well, it is hardly the case. Right now, there are over a hundred projects in the Blockchain world that have a specific focus on Blockchain. These development teams are creating new possibilities for the market and creating exciting new platforms.

It is because of the true capabilities of the Blockchain that the timeline towards the adoption of new technologies keeps getting shorter and past predictions keep missing the mark. Indeed, 2020 could be the year of the tipping point for the adoption of Blockchain in the industry. It is no secret that the advertisement industry is one of the least trusted by consumers, and Blockchain can be the solution to the negative perception.

To illustrate the potential and possibilities, we will highlight some of the most exciting projects in the industry. The powerful merge of Blockchain and marketing is just at the beginning, and the future looks bright for both.

More industries are changing because of Blockchain. One is the music market learn about it in this article.

Blockchain4Media takes a complete top to bottom approach to the ad campaigns and their pipelines. All of their ads are placed through their platform and recorded in the Blockchain to ensure full transparency. They have labeled this method Cost Per Thousand Humans which aims to assure advertisement firms and campaigns that their products are seen only by humans. They also do consultancy for ad campaigns and quality assurance.

They are also investing heavily in the deployment of neural networks, coupled with Blockchain to streamline and target ad campaign buys for their roaster of clients. They offer real-time campaign monitoring, so campaign managers can adjust their strategies to adapt to the market., Their technologies claim to improve the Return on Investment of running an advertisement push.

Blockchain4Media had its initial breakthrough into the market with one of the world’s largest CPG brands and electronics manufacturers. Their neural networks were able to find a seventy percent fraudulent activity during the campaign. Right now, the company is investing heavily in expanding to the United States, European Union, and the Asia-pacific markets. As full members of the IAB Tech Lab group, they have multiple research and development facilities to keep their technological edge ahead of the competition. 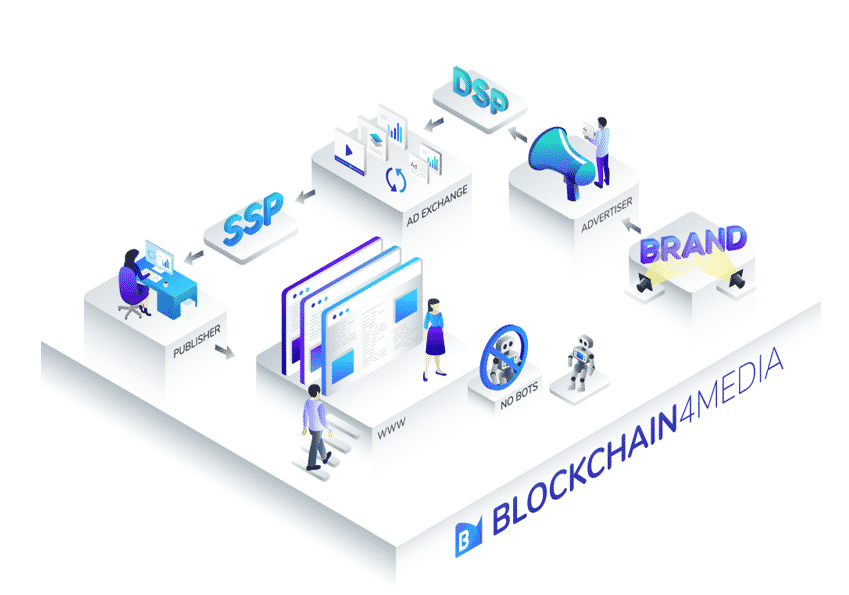 This is a project directed by Comcast’s FreeWheel, aimed at allowing TV demographics data and tendencies to be shared securely across all interested parties. The Blockgraph platform hosts the data from research in their enterprise-grade Blockchain, and grants access to the results for advertisers, ad agencies, consultants, and industry participants. The information of third parties is protected since only the aggregate results are available on the platform.

Additionally, each member of the Blockgraph platform retains the ability to share or block other participants on the network. Their final objective by bringing Blockchain into the TV space is to deliver secure, scalable, data-enabled TV advertising.

The company has already been operational for two years in the industry in the United States and the European market.

The project started as a reward and loyalty points service for mobile campaigns. Now they have moved to what they call a “moments-based” ad model that allows brands to place advertisements when a user has paused an app.

Kiip offers a Software Developer Kit which allows ad integration to its partners for data transparency and analysis purposes. They use this information and record on the Ethereum blockchain, so every single ad buy is visible and public. Single Ledger is the name of the system and has also a token component for the purchase of ad time also deployed on Ethereum.

Ternio is a scalable blockchain protocol created on Hyperledger Fabric & Stellar. The project aims to solve the scaling limitations of the Hyperledger protocol. They have developed a deck of custom technologies to achieve this. Their primary market is advertisers and brands that are looking to independently log every unique ad impression they purchase on a chain. Now each transaction is securely logged in a transparent ledger, and its performance can be analyzed for future adjustments.

Also, the protocol allows different coins for ad purchases and campaign development. Processing crypto payments in real-time, Ternio ensures there are no bottlenecks in the economic activity of the advertisement firms. The long waiting periods that are peculiar to the traditional banking system to place large ad campaigns are reduced to a minimum using Ternio’s Blockchain.

Finally, Ternio has developed a payment card that uses its Blockchain to settle payments. The card can hold several coins and tokens securely for fast payment. The card is fully customizable according to the client’s needs.

As we can see, the world of advertisement is ripe for change. The few projects we have highlighted here are but a small sample of the total space. The ability of Blockchain to deliver transparency, security, broader reach, and reduced costs has not been unnoticed by the industry.

As the innovations keep pushing the market and industry forward, we can expect more transparency and honesty from a world distrusted by the general public. The next wave of big advertisement firms will be Blockchain-based, and this may be the year we see it begin.