As the date of the CBOE- SolidX BTC ETF approval is approaching, the buzz around the crypto markets is increasing. SEC’s reaction over past two weeks has been neutral to negative with deferment of Direxion application and rejection of an application by Cameron and Tyler Winklevoss.

With sentiment in crypto street building up its difficult to say who will win the race in getting the first approval although the front-runner currently seems to be the trio of CBOE- Solid X- VanEck.

The following list provides complete details of BTC ETF applications filed by various participants. A few of them are physically backed while rest are crypto derivative backed. From the derivative backed ETF including that filed by VanEck, Rex Shares, Pro Shares and First Trust have already withdrawn their application for now while on the coin backed side Grayscale and Distributed capital have pulled out. 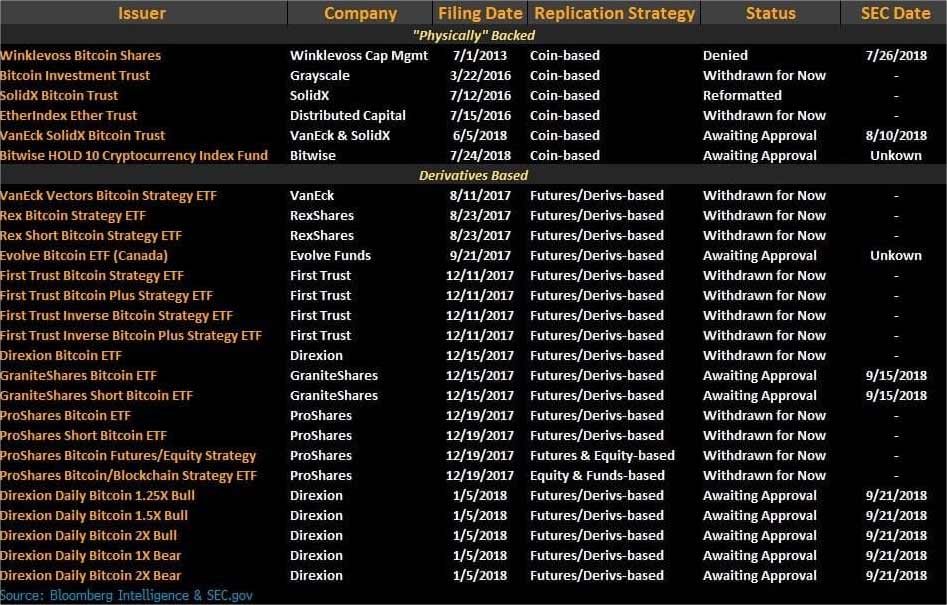 The fate has been sealed Winklevoss with a rejection, while applications for all ETF’s of Direxion, Granite Shares, Evolve Fund, CBOE-VanEck- SolidX and Bitwise are still in the hunt.  All eyes are hence on CBOE-VanEck- SolidX Bitcoin ETF as its application looks to be in the best position to be approved as it seems to cover all points that the SEC had raised while rejecting the other proposals.

While the decision is still pending, VanEck has tried to answer SEC’s concern with a new letter. Addressed to Dalia Blass, director of the SEC’s division of investment management, the letter gives solution for the five points of order from the SEC’s previous communication with the industry. Following are the answer VanEck has presented

“We believe that neither the volatility nor the current volume in the bitcoin futures market will inhibit the creation and redemption process by authorized participants and that these creations and redemptions will keep the proposed ETF’s market price in line with its NAV.”

Bitcoin’s prices too had remained relatively steady over the weekend hovering around USD 8000 with a brief dip when the Winklevoss ETF was rejected. Even though a lot of experts including Vitalik Buterin argued that the ETF noise was receiving too much attention the market seems to be in a mood of its own.

With so much of sentiment relying on the big decision, any negative news regarding the ETF will see the hammering of prices while an approval could begin an upward bull run for cryptos

Will CBOE- SolidX application is accepted by the SEC or it will continue its deferments and rejections? Do let us know your views on the same.