As we head towards the third anniversary of XRP’s all-time high price of $3.80 USD on 7th January, the digital asset investors will be feeling undone by the 95% plummet through the years. Moreover, the terrible run through 2019, despite hitting a high of $0.51 USD in June, further adds to XRP’s misery.

The XRP Army heavily tips 2020 to be the year XRP finally recoups its lost glory, but the first 48 hours in XRP’s market will not be encouraging at all to the bulls. One trader said the technical indicators signal a protraction of the bearish market and a break above the psychological resistance at $0.2000 USD may now be a lost dream.

However, with the bearish wedge channel on higher timeframes narrowed down, a break above the resistance will give the market renewed energy to push towards key resistance levels at $0.2200, $0.2500, $0.3000 USD. A failure to break the weekly resistance on the bearish wedge spells doom for XRP, and a drop towards $0.10 USD cannot be ruled out. XRP trades at $0.19076 USD, as at time of writing.

$XRP getting squeezed in the corner here !! pic.twitter.com/KKnCagYVWp

Looking at the hourly charts, the future does not look so good for bulls as a failure to break key resistance at $0.1990 USD in six previous attempts signals a possible drop for XRPUSD pair. 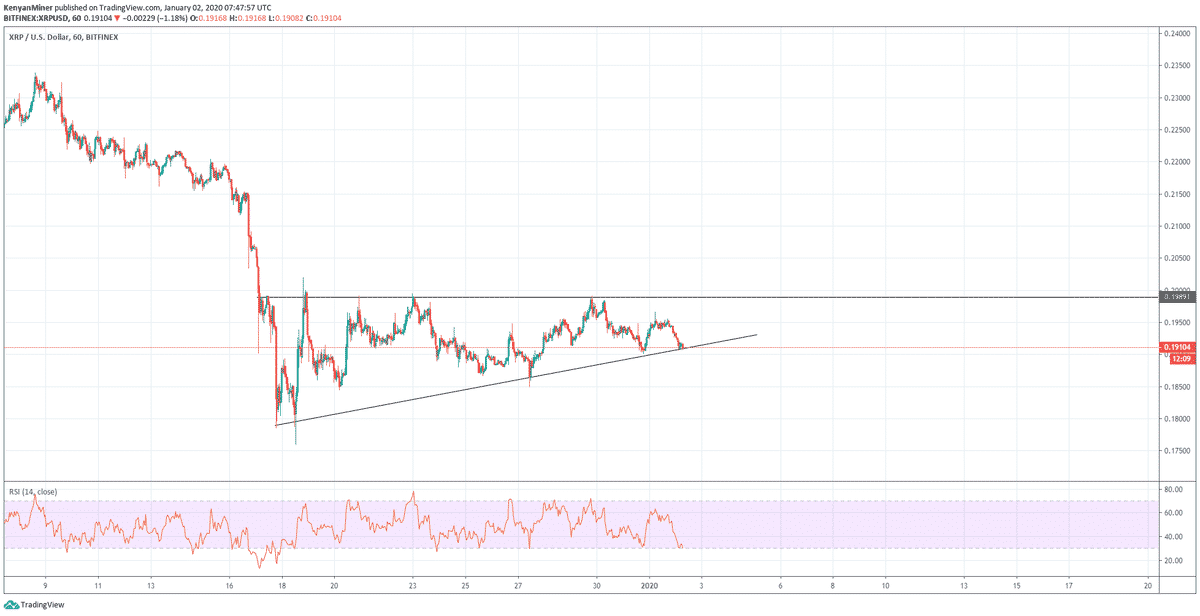 CryptoHawk, a crypto trader posted his analysis on Twitter claiming the third largest cryptocurrency in market cap claiming the XRP bulls should bid bye to $0.2000 USD as the price hangs on the bullish channel support.

$XRP – A better view for the next 5 waves coming down, still missing some data to know if 5 will be at 0.148 or 0.134 depending on how deep wave 3 goes. Will update as soon as I get more data. $0.20 is no more for sure, resistance you shall not pass! #XRP #XRPCommunity #XRPArmy pic.twitter.com/vbiLHmZZdr

The hourly Relative Strength Index (RSI) currently oscillates in the oversold regions on the lower time charts with a bearish angle. The death cross on the early Asian trading hours on 1st Jan 2020 further makes case for the bears with a drop below the support at $0.19000 USD a scary sight for the digital asset.

The longer timeframe chart indicators offer hope to the XRP bulls as seen on the weekly charts. A formation of a bearish wedge narrows down with the $0.2000 USD resistance level at touching distance. A break above the wedge resistance will signal a possible mini-bull trend in coming weeks. Moreover, the weekly RSI oscillates at 32, heading to the oversold regions, a signal of a possible ease in the selling pressure on the market. 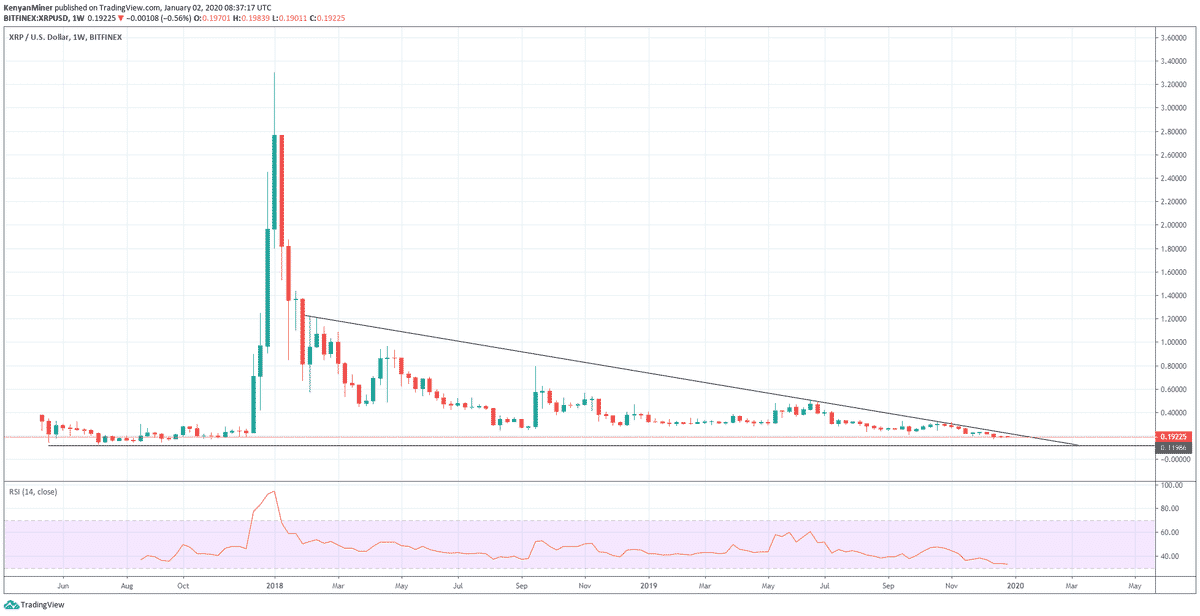 Nonetheless, the overall market sentiments in the market looks to be heavily impacted by BTC’s upcoming halving in May. A boost in the top coin’s price will without doubt boost the market along with it and XRP bulls will be there to experience and enjoy it.