As the market consolidates, (XRP) is rallying up against Bitcoin (BTC) seeing the XRP/BTC price touching 3777 Satoshis in the past hour of trading.

The price of XRP/BTC pair boosted past the 3580 sats resistance level signaling an upcoming bullish run on the token.

The current cryptocurrency market is in shambles as the price of BTC against the dollar drops to a two week low at $7,989 USD, as it enters a bearish trend. On different fortunes, XRP is the best performer in the last fortnight amongst the top 10 major cryptocurrencies, recording a 10% increase in price during the period. The third-largest cryptocurrency is trading at $0.29 USD, as at time of writing, ripping through its resistance barrier.

Looking at the one hour candle charts on the XRP/BTC pair, XRP is trading way above its resistance level following a 5% hike in price in the past hour. The digital asset’s price against BTC broke through the ascending triangle resistance barrier as bulls pushed the price to 3777 sats in the past hour, representing the mammoth increase during the period.

The MACD indicator line crossed above the signal line for the pair showing signs of an upcoming bullish trend on XRP’s price.

However, the relative strength index conflicts with the indicator as it oscillates above the band line, showing exhaustion of bulls to hold on to their positions and a possible bearish reversal in price in the short term.

XRP accumulation on the rise

The recent hike in XRP’s price is closely related to the increase in accumulation of the XRP tokens by the holders. According to Wietse Wind, XRP Developer’s website, ledger.exposed, each level of XRP ownership experienced a significant increase in the accumulation of the tokens. To make it to the top 0.01% of the list (currently with nine accounts) you need to own at least 15.3 million XRP tokens, up from 14.6 million tokens in July. 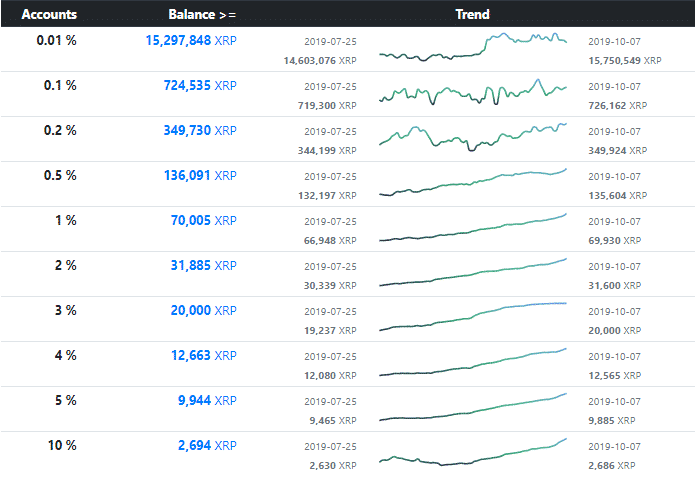 This shows the market may be entering an accumulation phase before a major breakout at the latter stages of the year. One Ripple investor and technical analyst, Crypto Rand, tweeted praising XRP’s magnificent rise,

Ethereum price imminent rise to $5,000 could trigger the altcoin season
Ethereum is flying the bullish flag above the horizon in…
Lujan Odera 388 Articles
Been in the field since 2015 and he still love everything blockchain and crypto! FC Barcelona fan. Author and journalist. Follow him at @lujanodera.
Follow Lujan @
Twitter LinkedIn