Ripple is holding between a crucial resistance and support as the Asian session gives way to the European session on Wednesday. The cross-border token has recently been rejected from $0.5, opening the Pandora box. At the time of writing, XRP is exchanging hands at $0.46 amid a potential breakdown to $0.4.

The news that Ripple has parted ways was calmly received by investors, perhaps because the company is fighting a vital lawsuit filed by the US Securities and Exchange Commission (SEC). The SEC took Ripple to court for allegedly selling unregistered tokens to investors and staying away from regulation for over eight years.

Meanwhile, the correction from the resistance at $0.5 is likely to be a ripple effect of the news that the blockchain company no longer collaborates with MoneyGram. The 4-hour chart has printed a rising wedge. This pattern has a bearish bias and come comes into the picture amid an uptrend.

The rising wedge reveals the bullish grip is getting exhausted while bears are preparing to swing into action. A rising volume characterizes a break under the pattern. Therefore, the breakdown tends to be rapid and must be timed accurately to make the most out of it.

For now, the least resistance path is downwards, especially with XRP losing both the 50 Simple Moving Average and the 100 SMA support. These broken anchor zones are likely to flip into resistance zones, making a recovery an uphill battle. 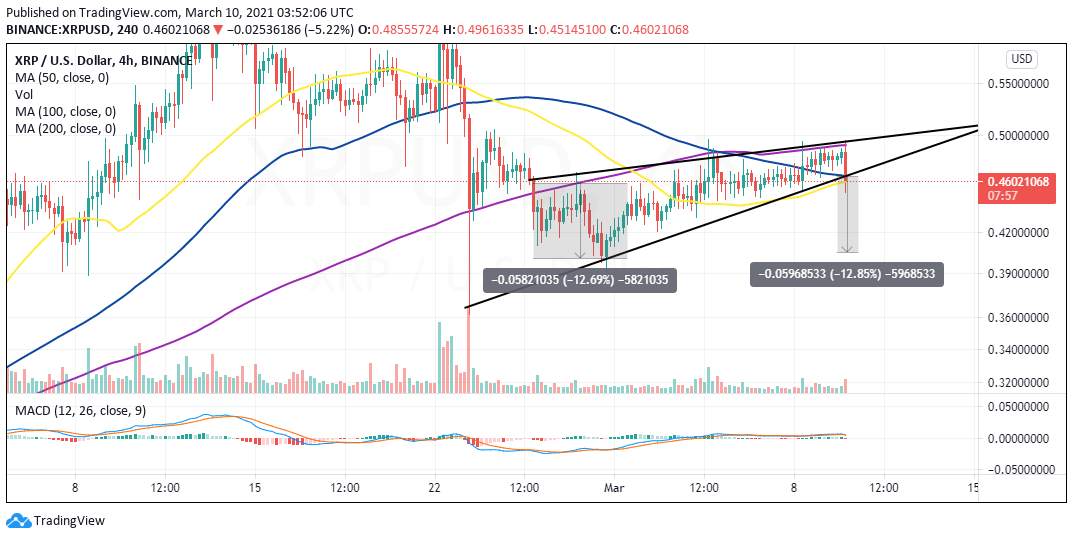 It is worth mentioning that the massive breakdown to $0.4 will fail to occur if XRP closes the day above the 50 SMA. Moreover, gaining ground above the 100 SMA will allow bulls to regain control and push past $0.5.