Ripple is apparently all set to transform the traditional fintech sector as expressed by its chief marketing strategist, Cory Johnson and director of regulatory relations Ryan Zagone while planning to launch MoneyTap with SBI holdings this year itself. Meanwhile, XRP is in the red while indicating bullish angle.

XRP price on a bullish momentum

The world’s 3rd largest cryptocurrency has been making recovery for the past 3 days in tandem with the entire crypto market while having constantly ups and downs. At the time of writing, XRP has been exchanging hands at $0.2784 with a 24-hour loss of 1.12%. It has a market cap of $11 billion while managing the daily trading volume of about $243 million. 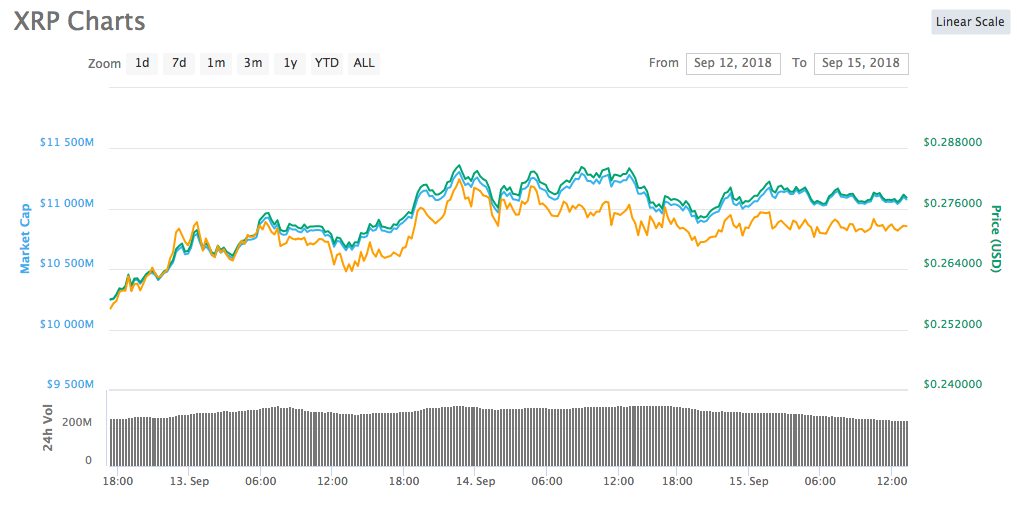 It broke the $0.2720 resistance level which will further found another one at $0.2675. Despite a slight dip in tandem with the entire crypto market, XRP is having a bullish momentum against both the US dollar and Bitcoin with chances of touching $0.2900.

XRP has been under a lot of pressure price wise with the Satis Group research prediction that stated XRP can drop down to the $0.004 in the next 10 years, losing about 99.89% of its value from is all time high (ATH).

Also, read: In the land of Islamic Banking and Arabs, Rippletakes on Stellar for Blockchain Supremacy

Ripple has always been upfront and clear about working with the regulators instead of bypassing them. Recently, the Chief Marketing Strategist at Ripple, Cory Johnson shared that finance is the most natural fit for blockchain, further stating:

“I really do think that finance is the place where there is the most friction in our global economy. And the solutions presented by blockchain are so obvious that they’re really going to change the way money and value move in our society…

When we meet with regulators, I personally have been really surprised by how much they know and how much they really want to know. They don’t seem to walk into this with sort of this notion of fear and doubt. They actually want to listen and learn.”

“We have customers using the solution for corporate payments, allowing real-time SME payments. Well think about SMEs, they’re mostly domestic-focused today, but as they grow internationally, they hit these barriers in the cross-border space and it becomes too operationally, too intensive from a treasury side to really engage in global growth. It becomes a barrier to commerce.”

He also shared how fintech is getting depended on blockchain and cryptos:

“I do think what we’re seeing now is a recognition that blockchain and crypto will play a key role in the next generation of infrastructure for financial services. And countries now recognizing there’s potential to be a leader there so they can become a global capital finance.”

The estimated timeline of the mobile app for both Android and iOS version is Autumn of 2018. Earlier this year, the plan has been revealed of the “groundbreaking smartphone application”.

“Together with the trust, reliability, and reach of the bank consortium, we can remove friction from payments and create a faster, safer, and more efficient domestic payments experience for our customers,”

Okita shared his excitement at the time of launch.

Avalanche, Ethereum Price Analysis: September 16, 2021
Avalanche bull run hits a new all-time high at $65 while its technical picture hints at the bullish…
Anjali Tyagi 440 Articles
Having a background in writing, I worked on a wide array of industry topics and have recently entered the world of Blockchain and Cryptocurrency.
Follow Anjali @