Zebpay, one of India’s first cryptocurrency exchange and app-enabled bitcoin wallet provider, has issued a circular that on its medium channel that stating that it may have to stop Rupee(Indian Fiat) withdrawals as its bank accounts may be disrupted in light of RBI circular dated April 6, 2018, which prohibits banks and financial institutions from providing any service in relation to virtual currencies such as ‘crypto-currencies’.

Is this the end of the road for Bitcoins in India?

Zebpay clearly mentions in its circular, that the industry has approached the apex court in India to seek relief against the Reserve Bank of India Circular as it feels that this is counterproductive and against the interest of the citizen.

Referring to that, Zebpay said,

“Our industry has approached the Supreme Court of India to challenge the circular, as we feel it is counterproductive and against the interest of citizens. As a responsible corporation, we regard customer protection and market-integrity as our primary objectives.” 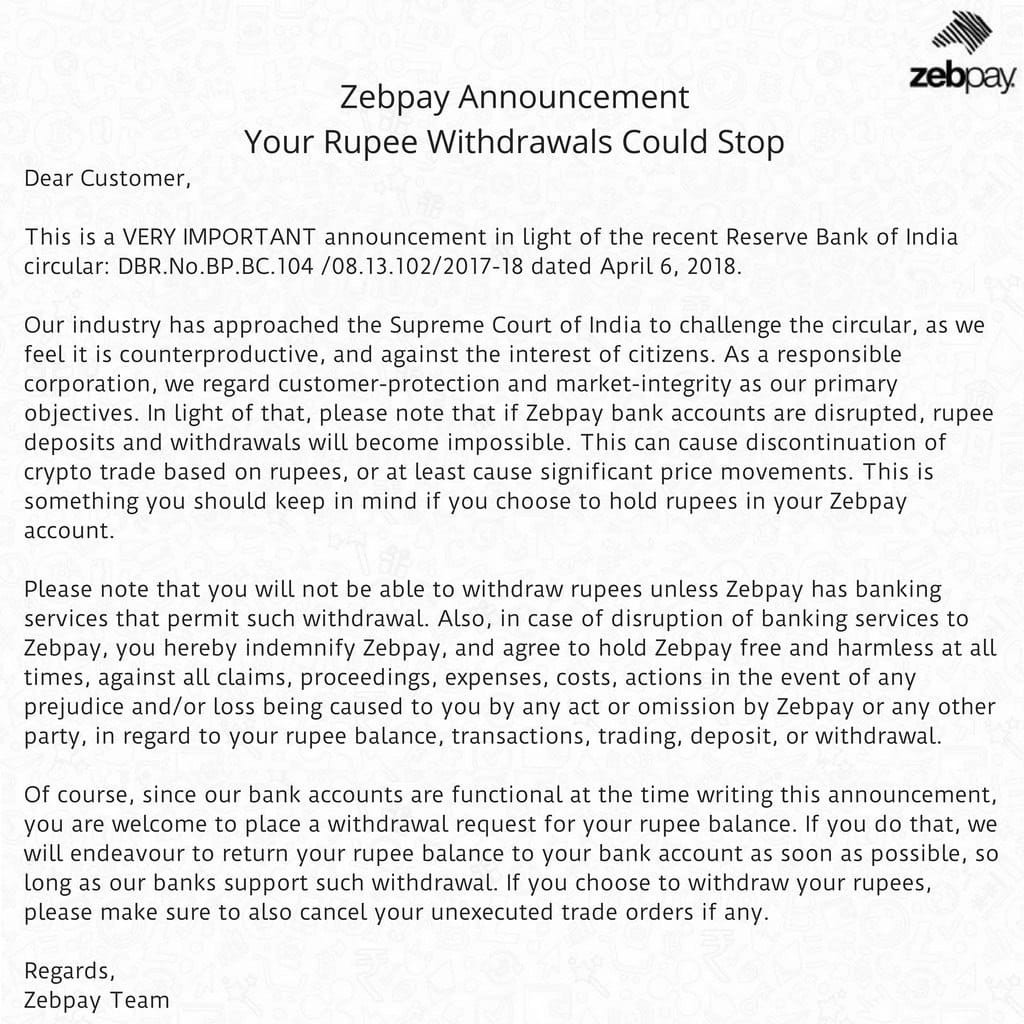 It is a cautionary notice that if the judgement doesn’t come in the favour of Crypto businesses, then it would not be able to operate bank accounts thus bringing a halt to Rupee (INR) withdrawal. The exchange has made it very clear that it would remain an integral organization irrespective of what the decision goes. It has ended the circular saying its banking channel is still active and people are free to withdraw.

Quoting from the circular,

“Please note you will not be able to withdraw rupees unless Zebpay has banking services that permit such withdrawal. Also in case of disruption of banking services, you hereby indemnify Zebpay and agree to hold Zebpay free and harmless at all times, against all claims, proceedings, expenses, cost, action in the event of any prejudice and/or loss caused to you by any act or ommission by Zebpay.”

Although Zebpay announced crypto-to-crypto trading in April, soon after the RBI circular, fiat trading was still an option on the platform.

The notice has sent out a panic to Indian crypto investors in India. As the news hit the exchanges a huge sell-off was seen across major coins.

The fear is slowly creeping in the dateline approaches. It is soon to be seen whether other exchanges do follow the suit. Now everything would depend on what Supreme court decision.

Will this end the path for cryptocurrencies in India? Will India eliminate what other countries are embracing? Do let us know your views on the same.