Tim Draper American Venture Capital InvestorThe governments across the world have started to realize that the competition is for money, entrepreneurs and the businesses of the world rather than physical borders which were back then.https://cdn.coingape.com/wp-content/uploads/2019/07/22194330/timDraper.png

Explore the roadmap to the future of the society, with Akshay Aggarwal, Co-founder of Blocumen Studios & Blockchained India & billionaire investor Tim Draper is popularly known as the ‘Bitcoin guy’ in his podcast series “Society 3.0”. Tim is known for his sci-fi investments and also the founder of Draper University and Draper Associates. So here’s an extract of the podcast for and all the important points one can’t miss. Society 3.0 aims to understand the evolution of the current society into one that is happier, increasingly decentralized, and pillared on peer-to-peer commerce. 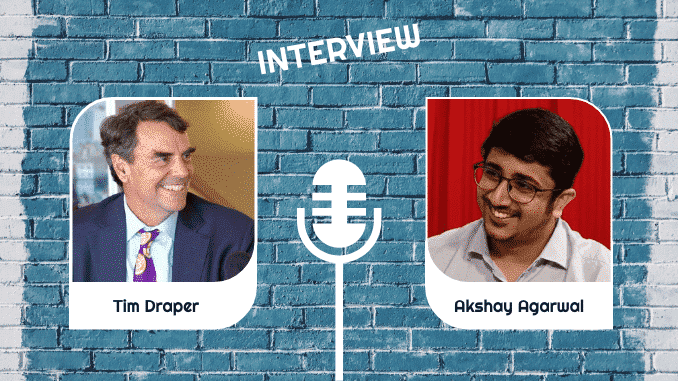 Q: Governments in every country are engaged in a number of insurances. How can Blockchain be used in this sector?

There will be a transformation of banking and finance and commerce of all kinds. The government in every country is engaged in a number of insurances like healthcare, workman’s compensation, employment insurance, pensions etc. Well, there are always people in the way and when people get in the way there’s room for corruption, mistakes and unfairness. If these are implemented using Bitcoin and Blockchain on a smart contract, we can have a perfect insurance model that will result in more efficient, effective and fairer insurance that cannot be corrupted by an individual. The governments across the world have started to realize that the competition is for money, entrepreneurs and the businesses of the world rather than physical borders that were back then. So the more efficient and effective the governments are, the more naturally people will gravitate toward using them because then most of the government’s governance will be virtual.

Q: Many countries are starting to be a part of this huge revolution but still there are countries averting from that. What are your views on this? (are they making the right choice)

The countries adopting this technology are looking forward to the progress of the country which is a positive move forward but countries like China are still a step backward. Well, they have a president who wants to make sure that everything is under control and thus is restricting its people from using this technology which I think is going to be detrimental.  I think in the long-term all the Chinese know that this is really important for their economy and they’re going to want a free market with a decentralized currency. They will want this future world where they can invent and create it and make money by trying new things. A country like Malta wants to be the crypto center of the world. Well, with Switzerland, they started out with the tiger with the tail but they started over-regulating and thus everybody left. But now it wants to make a return.

I think in general, regulations breed corruption and deregulation breathe freedom. We should be open to other forms of governance and thinking. Well, this is an exciting time and I think we’re headed toward a more global and peaceful and loving world because really these geographic borders are becoming more and more meaningless. This is a huge opportunity for a new form of governance, which has to compete for its citizens. They are starting to recognize that they’re in competition for the money, the entrepreneurs, the citizens, and the businesses of the world rather than physical borders and land.

Q: What are your thoughts on the Supreme Court quashing the prohibition on the banking services for cryptocurrency companies by the central banks?

I think, India’s Supreme Court was very wise in their decision. They are thinking about the good of the country and also the good of the world in long terms. Bitcoin is so important for everyone, that this decentralized world is opening up all of its borders. It’s going to be much easier to do business, to communicate across borders, to pay people across borders. It’s really opening up a whole new economy.

It is one of the best times in the world to be a change agent, to be an entrepreneur, venture capitalist or somebody who really wants to move the world because this new technology is open, transparent and global and keeps perfect records and can start to turn the world into a much more automated, much simpler place to be. Economies are going to be exploding because of its open borders and it being frictionless. It allows human creativity to thrive as the machines can take on more of the day-to-day tasks that have to be done over and over. A lot of people fear this, but actually it should be embraced. After all, what’s better than having a machine that does all the tasks that have to be done repetitively.

Q: You quoted, ” India is choosing one religion over another, it makes me seriously concerned about my plans in different businesses”, when the Citizenship Amendment Act was enforced by the Indian government which got very controversial. Please share your context behind the tweet.

India is a great place to invest, with so many great entrepreneurs and ideas and hard-working people. But above all, if there exists rules that favor one group of people over another, raises a lot of doubts. The country that favors one type of person over another, one religion over another, one race or look or sex over another, fail in one way or the other as they are more focused on the one being more privileged than the other, (the part of the society better privileged than the other/part of the society which is more ‘lucky’ than the other), which is not sustainable. Favoring one set of people over another never encourages a strong economy. An open society that is honest and works hard loves their neighbors, no matter who or what they are, tends to create amazing success. Economies boost off wherever there is freedom, openness, and transparency. Thus, the key to success is to create an environment where people are only focused on creating an impact.