Every day in the crypto space we are observing innovations, whether they are in the form of NFTs, creative use cases or gaming revolutions that also benefit players while providing entertainment. At this point, Metarun has emerged as a revolutionary crypto gaming project that aims to introduce a new reward-based gaming experience using top-notch graphics, characters, and interface. The GameFi space is littered with play-to-earn projects, but Metarun and its team want to cause disruption with their new Run-to-Earn gaming category. If successful, Metarun would be a trailblazer that delivers high-quality gaming mechanics as well as a Play-and-Earn opportunity for all.

Q1. Can you explain the Metarun project’s uniqueness in a few sentences?

Metarun is the world’s first Play-to-Earn (P2E) endless runner game and introduces the Run-to-Earn gaming category to the world. The game also aims to push the envelope further and bring on the next evolution in gaming; shifting Play-TO-Earn mechanics into Play-AND-Earn. It is built on the BNB chain offering a seamless experience to our players.

At the same time, it’s not just about the technical stuff. Metarun is first and foremost a game. That means the team places gameplay, player experience, and graphics first.

The game is built on Unreal Engine 5, which usually is being used for PC games and it is the latest in technology. We’re using it for a mobile game and it allows us to deliver the quality of graphics that we want Metarun to be known for.

Q2. For those who don’t know about GameFi, can you explain what role does Metarun play in it?

Metarun brings together the best of the traditional gaming experience and blends it seamlessly with crypto technology. It’s kind of a bridge between traditional gaming and crypto-gaming. The game is free-to-play, removing any entry barriers for players and creating a more democratic gaming experience. Gamers don’t have to pay to play. Players can just download the game, choose their character and play, enjoying the HQ graphics and gameplay.

Q3. How does the Run-to-earn model of Metarun work?

Metarun is an endless runner game set in a time bubble. Metarun’s characters find themselves in a loop of time that runs time and time again. Of course something has to change, right? Abolutely. While there is a time loop, magic and technology advances, which keeps things interesting. Essentially, the more the player runs, the more coins they gather.

As the game progresses, players overcome obstabsles and gain coins which can be turned into the virtual currency OPAL. These can be exchanged for the game’s native token $MRUN. The tokens allow players to purchase in-game items and characters skins as NFTs via the native cross-chain marketplace.

Q4. What’s the role of NFTs in the project and how is it possible to earn from it?

Metarun has 45 unique characters that each have upgradable NFT skins divided by NFT class and its rarity. They differ in prices and ROI players will receive when using them. The more rare and expensive skin, the more money the user can earn. There is a cap on the amount of daily and monthly battles, and the maximum level of upgrading a character’s abilities, etc. 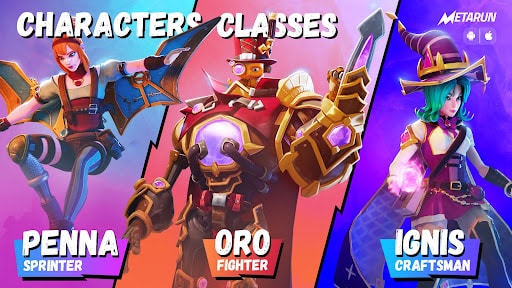 Q5. What role does Metarun’s NFT marketplace play in the project?

Metarun has a native marketplace, which allows players to buy new character skins from Metarun or other players, and sell their own skins as well. But there’s one more feature that we’ve created that we’re really excited about. A player can lend their NFT skins to another player if they don’t have time to play at the moment. In doing so, the owner received shares of the revenue made by leasing the skin while the other player reaps the rewards.

The game’s internal economic system runs on its native token $MRUN and the virtual currency OPAL and allows users to play and earn, purchase in-game items and character skins as NFTs via the native cross-chain marketplace.

Q6. Can you tell us more about the in-house team behind the project?

The in-house team counts 30+ people and is continuously growing. Metarun’s star team includes members, who previously worked with such industry leaders as Ubisoft, Snapchat, Wargaming, Gismart, Vizor, Gameloft, etc. Moreover, the core team is lifelong experienced gamers and this contributes to the project quality as well. 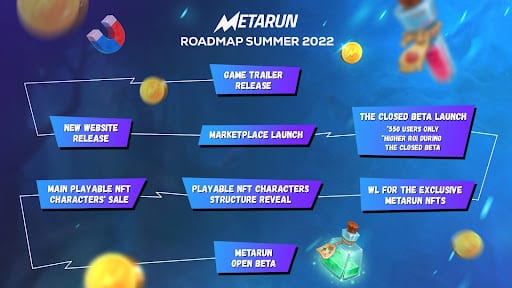 Q7. We’ve heard a lot about Metarun’s Closed Beta coming soon, can you tell us what to expect?

Initial Metarun closed Beta will see 3 characters made available with the release with more to be added soon. Moreover, over the period of closed Beta, testers will get higher ROI — up to $18 per hour — from their characters. As you see, conditions are really extremely favourable. To become one of the 550 testers and get other perks, potential participants should be part of the Metarun community on Discord.

✓ Share:
Disclaimer The presented content may include the personal opinion of the author and is subject to market condition. Do your market research before investing in cryptocurrencies. The author or the publication does not hold any responsibility for your personal financial loss.
Similar Interviews

Elrond Price Jumps By 9% Over This Announcement