Clouds are rising over the value of USD and may lead to subsequent drop in its value in near time. African companies are taking this risk seriously and are calling it a matter of National concern calling Central Bank for action on the matter and have urged to favor Bitcoin over US Dollar.

The US dollar suffered from ongoing “sell the fact” response to the approval of the tax bill. The end-of-year portfolio adjustments along with weaker consumer confidence, a miss on jobless claims and other negative news did not help the greenback. The increasing price of oil and other commodity currencies have also led to USD losing its ground across board.

Look at the long-term chart of the U.S. dollar index below. The index essentially tracks the performance of the dollar relative to other major currencies.

As a matter of fact many african countries rely on the USD cash reserves and the US Dollars predicted drop in value has alarmed representatives of many companies. Groupe Nduom, vice president of a leading financial holding company, Papa-Wassa Chiefy Nduom, has taken to Linkedin and Twitter to bring this issue for “less reliance on greenbacks and more investment in bitcoin” in the limelight.

“What if this continent could finally build consensus around a new digital reserve asset – and figure out ways to fund infrastructure development by leveraging it,” 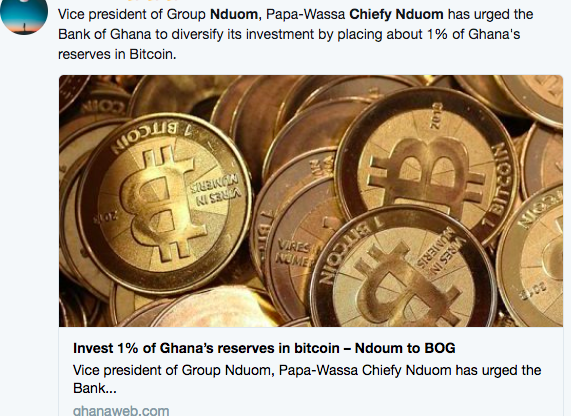 “I will be looking for the first African Central Banker who says – I’m tired of putting my hat in my hand and begging – let’s take some risk and dig into this new global, permission-less, robust and extensible financial ecosystem. Everything we need to learn is for free on the internet.”

Increasing interest of African countries in cryptocurrency and Bitcoin

There are about 2.5 billion people that have no access to banks or accounts and most of them live in economically and politically unstable countries. Bitcoin can be used as a medium to store wealth, thus eliminating the chances of any local government expropriating funds from a bank account.

Recently, Africa is also observing a rise in Bitcoin activity. Customers in the world’s second largest continent and second most populous have been taking cryptocurrency seriously for some time now.

South Africa is one among the key players when it comes to cryptocurrencies and blockchain with a number of startups running in the country.

South Africa currently does not have any regulations for use of  cryptocurrencies. Though, the Reserve Bank has cleared its position on virtual currencies and outlined them in this paper on  Position Paper on Virtual Currencies issued back in 2014.

The opportunities in the African continent for cryptocurrency startups

One particular area where Bitcoin and other cryptocurrencies may prove particularly disruptive in the African continent is for remittances. Money remittances to sub-Saharan Africa, mostly sent from members of the community working abroad, were expected to rise US$41 billion in 2016.  It is estimated that remittances in Africa account for a country-by-country average of 5 percent of GDP.

Can Bitcoin be alternative to traditional banking?

As such, Christian who is founder of Nigerian startup Bitstake says Bitcoin can offer a viable alternative form of financial services for Africa.

“Bitcoin can help financial institutions in Africa and produce healthy alternatives, if a bank is not in reach of a populace then they will need viable alternatives to safely secure and transmit finances – we believe our service caters to this “unbanked” segment.”

The barriers to growth

No doubt bitcoin is a novel concept that might transform the African continent’s economics but it is still in its infant stage. The major hurdles that might arise to Bitcoin adoption is that

Falk Benke, founder of Ghanian bitcoin startup, beam,  argues Bitcoin will not be able to fulfill its potential unless uptake is made easier through a number of measures, ranging from community education to the creation of a favorable regulatory regime.

“Bitcoin has the potential to make an impact in Africa under certain circumstances: adoption of the masses which requires education and accessibility through feature phones as well as a friendly regulatory environment,”

It leads us to a question, will the drop in USD value affect Bitcoin??

✓ Share:
A computer science engineer, I have been adamantly following the blockchain and cryptocurrency industry for the past 2 years. A crypto enthusiast and hardcore blockchain follower. Reach out to him at [email protected]

Ethereum Founder is No Longer a BIllionaire
Facebook Instagram Twitter LinkedIn
Partyush Goyal
38 Articles
A computer science engineer, I have been adamantly following the blockchain and cryptocurrency industry for the past 2 years. A crypto enthusiast and hardcore blockchain follower. Reach out to him at [email protected]