Money isn’t everything but it sure as darn hell makes misery a lot easier to bear. Crypto media sites would know. CoinDesk recently published a piece that ousted a clear MLM fraud called Karatbars; CoinCurb published a full timeline on Karatbars. Subsequently, media like Cointelegraph and CCN pulled down the ads they had placed for Karatbars.

The point, however, is that Cointelegraph and CCN took considerable sums of money to promote a clear MLM scheme. In fact, Cointelegraph was an aggressive promoter of Karatbars. In the cryptocurrency space, much of the heat is given to ICO founders but the reality is that the worst projects cannot reach the masses without the help of companies like Cointelegraph, which did not conduct even minimal due diligence to avoid taking money from a fraud.

However, it seems some companies have a few remaining dollars to squeeze from their favorite cash cow: the MLM fraud called Karatbars.

In fact, yesterday, Bitcoinist published allowed a promotion piece that defends Karatbars. This isn’t the first time Bitcoinist has defended Karatbars. While Cointelegraph and CCN are the promotional channels for Karatbars, it seems Bitcoinist is the defense attorney. However, this media isn’t alone; News BTC has made constant efforts to promote the Karatbars fraud.

While some media outlets have recognized their wrong, News BTC remains adamant on promoting Karatbars, alongside the leading American Business media, Forbes, which went on to proclaim Karatbars is a leading project in Asia. Ironically, Karatbars is based out of Germany. Quality journalism.

Just In: Amid Crash, Market Expansion Could Boost This Stablecoin

This Stablecoin's Market Cap Skyrockets Amid FUD In Tether, UST

Some unknown websites like Netcoo.com and BusinessforHome.org have also promoted Karatbars.

What is a Ponzi Scheme?

Per Wikipedia, a Ponzi scheme is…

“ a form of fraud which lures investors and pays profits to earlier investors by using funds obtained from more recent investors.”

Starting a successful business is tough. Legitimate businesses rely on successful entrepreneurs. However, ponzis are different. Even though it’s pretty obvious to spot a too good to be true opportunity, some people are still falling for Ponzi Schemes.

Back in 1920s Charles Ponzi, with all the hype and flowery words, ran a scam for over a year before it collapsed, costing his “investors” $20 million. He founded the Ponzi concept, which has been regurgitated in new formats over and over.

This year, the same concept played out under the name of Karatbars, as many have accused. This time, this MLM company sold gold bullions! It sounds crazy because selling bullion is a real business. However, Karatbars came with a catch. Buyers had to pay huge lump-sum amounts in advance to get a near 40x return after a year. Quite the condition.

a Karatbars International, hailed by Forbes as One of 10 Blockchain Companies To Watch In 2019, promised investors a 40x return in a year. Clearly, Warren Buffett did not get the memo.

“To revolutionize our payment system with the power of the blockchain and ensure “safe gold” for people as an investment vehicle.” This is what the  Karatbars founders Harald Seiz, Josip Heit, Alex Bodi, and Ovidiu Toma too good to be true promise for their investors.

They claimed that they created a new digital currency, which they called KaratGold Coin (KBC) They are proud that they stand apart from other ICOs because it is backed by gold, as government currencies were in the old days.

Karatbars promised a 40% commission to their affiliates and an additional “residual passive income.” Gold sales, operating on hair-thin margins, can never legitimately offer anything close to this. However, this is clearly not as grand a red flag as the fact the company promised a 40x return. However, this did not stand odd to Cointelegraph when it chose to rigorously promote Karatbars.

Much of the strategy behind any Ponzi is the creation of hype. As part of their hyping marketing strategy, They rename its native token that was originally “KaratBank Coin” and switch it to “KaratGold Coin”.

They’ve announced last year that on the 4th of July 2019 will become the “Gold Independence Day”, where people can exchange the KBC coins for pure physical gold at the rate of 100 KBC = 1g

“We work really hard to ensure that starting from the Gold Independence Day on July 4th, 2019, a full-featured gold circulation is put in place worldwide and the phrase ‘I will pay in KBC’ means ‘I will pay with gold’ “.

“We make the financial future of the world and are happy to have you around.” – CEO Harald Seiz 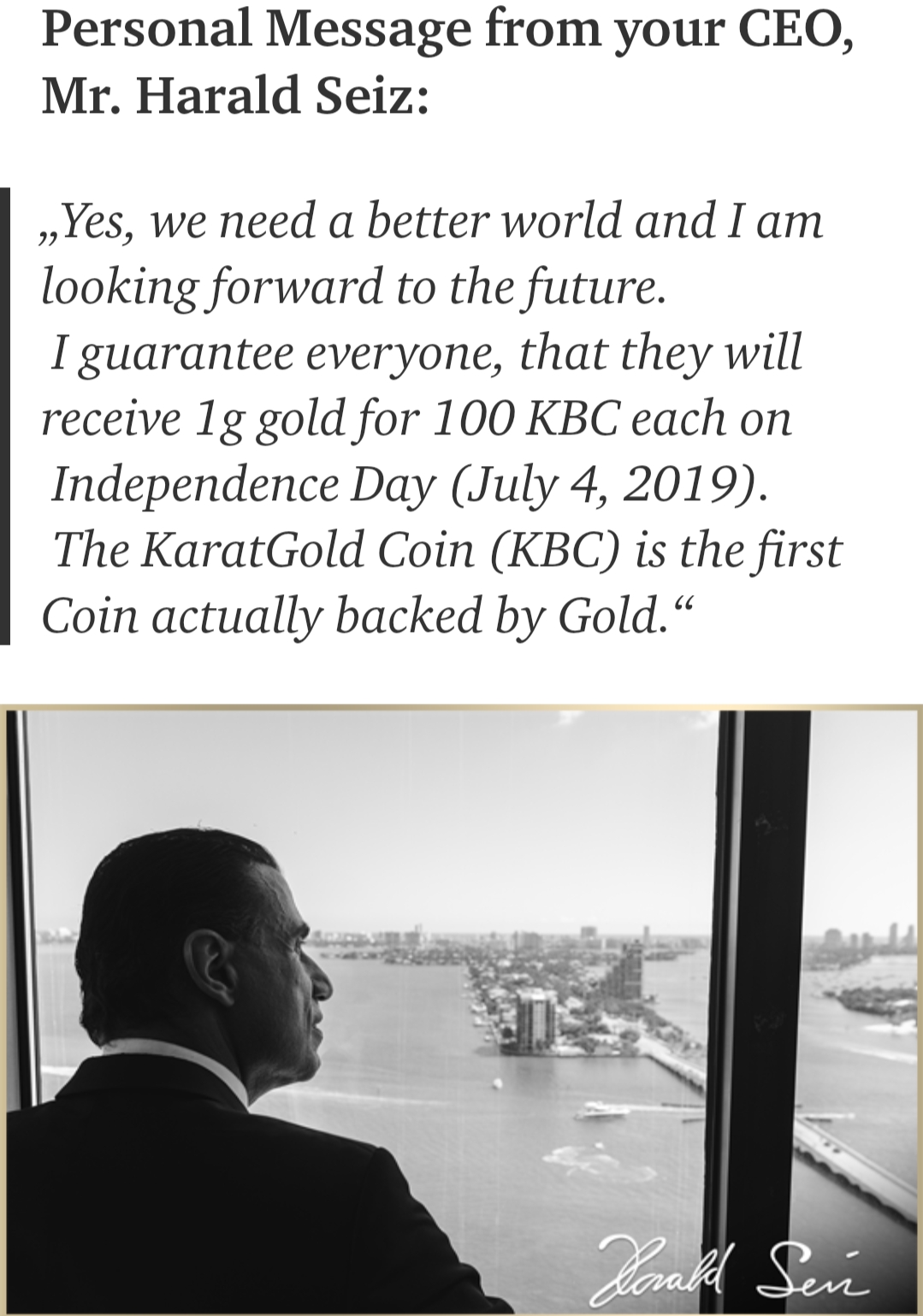 This may be one of the best hype of their marketing styles.

Since that video and transparency of the team is essential in this kind of scheme, CEO Harald Seiz and chairman of the board Josif Heit  even made this video with over 1.6k views and stated that they would be buying and hold 5 tonnes of real gold to serve as a foundation for a new payment system, as well as backing for Karatbar coins

And to finally fulfill their plan, they paid several reliable media in order to promote Karatbars with banner ads, sponsored content, and even organic content with promotional plugs. They even got unknown websites like Netcoo.com and BusinessforHome.org to promote them.

And then… well, what you’d expect an MLM coin to do, happened. KBC began to dump hard. Today it’s sitting at just under 5 cents. And in order to please and get back the angry investors, the Chairman of the Board Josip Heit released a video on July 8th.

The CEO Harald Seiz reversed his earlier promise and claimed that affiliates misunderstood they would only be able to “claim” their gold. He also trotted out MLM crypto excuses greatest hits, including “scammers” and “KYC.” On July 11, the CEO Harald Seiz created himself a  Q&A style video that was uploaded on the company’s official YouTube channel, Seiz attempted to calm his investors.

During his Video, On-demand on “What is happening with our coin?” without any doubts, Seiz admitted that there’s no value behind KBC coins because “there’s no business attached to them”. In other words, it is worthless.

Curiously, in answer to “What is more profitable now: Change KBC for gold or hold the KBC?”, Seiz dodges the question and tells affiliates “nobody can see in the future, it’s up to you what you doing”

Then, later on, he still tried to pissed people by making another big lie of even bigger returns to investors, encouraging them to hold on to the coin, so that their value doesn’t drop further.

More pertinently though, it also explains why Karatbars will never honor Seiz’s promise. He just proved that KBC wasn’t backed by gold at all, that  Harald Seiz, Josip Heit, Alex Bodi, and Ovidiu Toma’s empire is a real Ponzi scheme. That was all marketing bullshit to placate Karatbars affiliate investors, who collectively have lost millions investing in KBC.

“Karatbars not only argued in contradiction to his earlier court statement but also described the tokens as “worthless” — just to keep down the amount in dispute after the lost legal dispute.” – judge of the Higher Regional Court Dr. von Gumpert

Karatbars founders, Harald Seiz, Josip Heit, Alex Bodi, and Ovidiu Toma tried to sue consultants and subcontractors for exposing the truth that the coins are worthless, demanding various information claims, accounting claims and also the transfer of KBCs. However, the high cost found their application unsubstantiated and denied the Karatbars what it was asking for (§§ 935, 940, 917f ZPO)

Despite all of this Ponzi evidence, there are still some people who will fall for another money grab by Karatbars The company is planning to launch KaratNet this October and this is another huge problem.

Coinbase Announces Partnership With American Basketball Teams.
Stan Peterson
1082 Articles
Being an active participant in the Blockchain world, I always look forward to engage with opportunities where I could share my love towards digital transformation.

Just In: Amid Crash, Market Expansion Could Boost This Stablecoin

This Stablecoin’s Market Cap Skyrockets Amid FUD In Tether, UST