Against the ban on cryptocurrencies in South Korea 186,022 people had participated till 10 am today in a petition. South Korean Government has officially declared that there is no ban on the exchange of cryptocurrency as of now, and the investors are responsible for their own investments.

Amid the uproar in South Korea to reject the ban proposal on the cryptocurrency exchanges, and people asking to fire Justice Minister and the Finance Minister for manipulating the market, the government said the ban is not finalized yet.

Today, The commissioner of the Office of Economic Coordination, Chung Gi-hun, held a meeting at the Seoul government office, where he said:

“Recently, the Minister of Justice said that the closing measures of the exchanges are one of the speculative measures proposed by the Ministry of Justice in the special measures on December 28 last year. We will make the decision through sufficient consultation and coordination. ”

“We will pursue the virtual currency realignment system announced in the special measures of December 28 without any hitches,” and “We will strictly deal with the illegal acts related to transactions such as price manipulation, money laundering, and tax evasion through the joint investigation of prosecutors, police and financial authorities.”

Chung also talked about the need to be cautious as the currency is illegal and could be potentially used in illegal acts.

“Virtual currencies are not legal currency and nobody guarantees their value. Because of illegal acts, speculative demand, and changes in domestic and overseas regulatory environment, I have to be careful.”

“Did the government ever make a happy dream for the people?

South Korean people react strongly against potential cryptocurrency regulations and have started a petition titled, “Did the government ever make a happy dream for the people?” Published on the website of the Cheong Wa Dae National Petition. 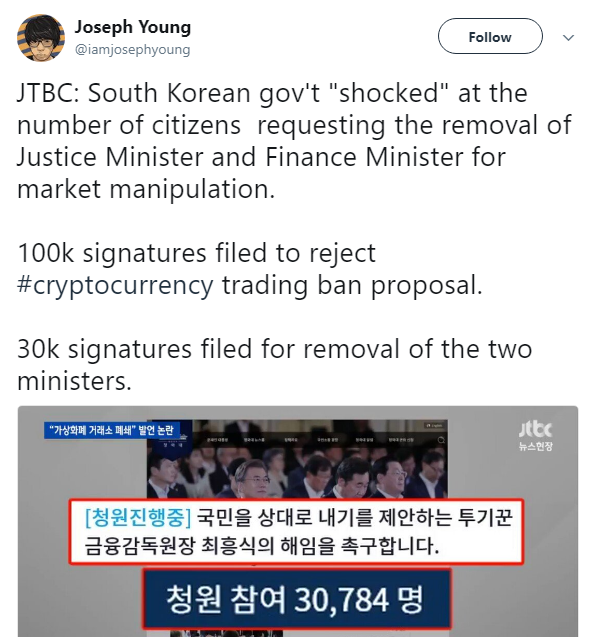 The Cheong Wa Dae National Petition titled “Did the government ever make a happy dream for the people?”, is against the cryptocurrency regulations that already has 186,000 people in support.

It is expected the petition will exceed 200,000 people very soon. If the petition reaches this number within a month, which it is likely to, the government have to put it in an official position. 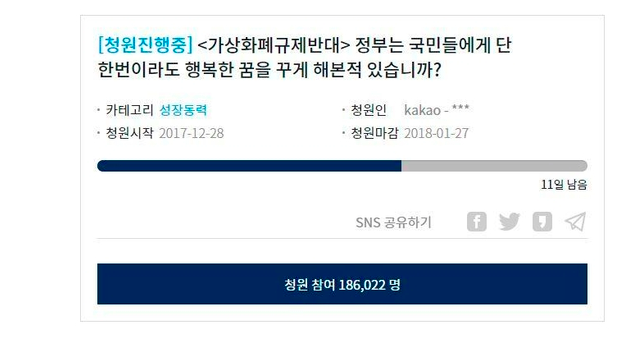 “Some virtual money is illegal because of the people who use it, they have been sold to those who participated in the illegal speculation to the normal investors because of the people who invested big money.” In the present situation where the developed countries are already investing in virtual money and are developing further, I do not want the economy to decline. ”

The South Korea government is rethinking its take on cryptocurrency regulations and looking for a better system to control it.