DeFi was the hottest trend in crypto in 2020, and it doesn’t look like it’s in any danger of slowing down just yet. As the cryptocurrency markets have raced towards new all-time highs, the total funds locked in DeFi have been rising exponentially. After hitting the significant milestone of $1 billion in February 2020, the DeFi markets hit a new record of $45 billion locked by early March 2021.

What’s driving the growth? One word – yield. In traditional finance, annual percentage yields rarely nudge 2%, even at the high end. DeFi yields can be almost unbelievably higher, depending on your risk appetite. For example, staking stablecoins on Curve Finance can yield returns of up to 12% annually, according to data on CoinMarketCap. However, the current returns for some more volatile tokens on PancakeSwap can run as high as 13,000%.

So how does it work? There are various mechanisms, which generally involve pooling funds to provide liquidity or for lending purposes. For example, decentralized exchanges like Uniswap, which runs on Ethereum, or PancakeSwap, which runs on Binance Smart Chain, provide rewards to those who stake their funds to provide liquidity for the token pair. Rewards are a share of transaction fees from those who use the pool to swap tokens, and they may also be paid as a native token like Uniswap’s UNI or PancakeSwap’s CAKE, known as “farming.”

Lending pools are similar, except instead of transaction fees, stakers earn interest on funds lend out to borrowers using the pool.

Staking tokens in this way provides the user with a “pool token,” which represents their stake. They can often stake this pool token into another protocol to generate even more rewards.

A Word of Warning

However easy it may be to get lured in by the promise of these insane rewards, DeFi is not for the faint-hearted. As with any investment, the higher the reward, the bigger the risk. If you’re staking obscure token pairs on a decentralized exchange, you risk falling foul of a concept known as “impermanent loss.” This occurs when tokens are volatile, meaning that your funds go down in value faster than you can earn them back in yields. Although it’s called impermanent loss, if you withdraw your funds before the value recovers, the loss is very much permanent. 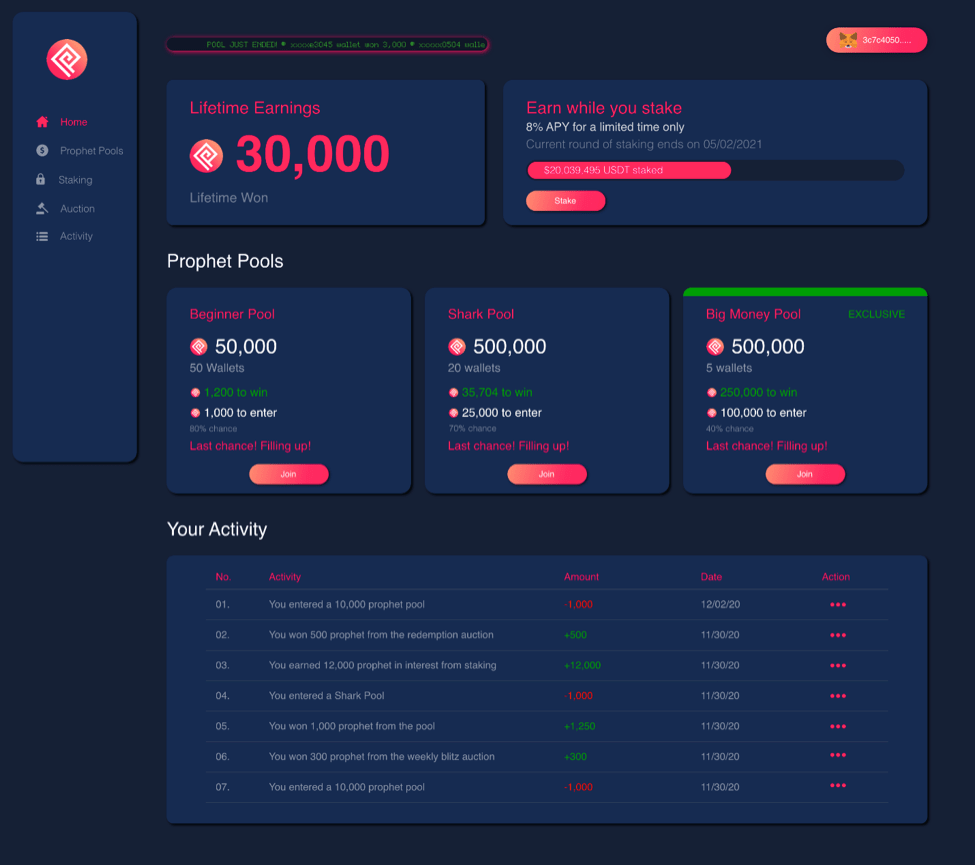 As such, many of the newer entrants to the DeFi markets aim to solve the challenges of their predecessors. Prophecy Project is one example, with a central feature called Prophet Pools, based on the idea of socializing yield for instant, low-risk rewards.

It’s deceptively simple. A Prophet Pool is a reward-driven event that takes place on the Prophecy network. Although the protocol is still in development, the idea is that anyone can set up a pool with a defined set of parameters. These include the number of participants who can join, the staking amount (called the “ante”), and the success rate, which is set between 60 and 90%.

From the user’s perspective, they can simply choose a pool and start staking to win. Let’s assume a pool is open to ten participants, with an ante of 100,000 Prophecy (PRY) tokens and a success rate of 80%. Once the pool is full, eight out of ten participants will win a share of the jackpot, which is composed of all participants’ original stake.

As you can imagine, this idea is a lot simpler for newcomers than many of the more complex apps for which DeFi has become known so far. There’s no need to generate pool tokens or navigate multiple user interfaces. Prophesy simply displays the pool parameters in a single interface. The user can connect their wallet and start joining pools for a high chance of winning returns.

The first generation of DeFi managed to attract significant investment even with the high risks and challenging UX. By overcoming these issues, and when more newcomers than ever before are flocking to crypto, the 2021 DeFi generation stands a good chance of attracting exponentially more investment than its predecessors.

Three Arrows Capital Files For Bankruptcy, Co-Founder Sells His House
Twitter LinkedIn
Achal Arya
527 Articles
Achal is an entrepreneur and a product designer with a bachelors degree in Computer Science. He works in the Web3 domain and manages new developments at Coingape. Follow him on Twitter at @arya_achal or reach him at achal[at]coingape.com.