Bitcoin Transaction Value has crossed Paypal and Discover services as stated by ARK Invest crypto analyst Yassine Elmandjra. His statement comes at the right time amid rising pessimist claims towards bitcoin regarding its use for payment processing, scalability, and speed.

Visa and Mastercard lie ahead

Yassine Elmandjra, says that bitcoin transaction’s dollar value has outperformed that of payment processor PayPal by a wide margin. The top coin has also surpassed the transacted value of credit card Discover. According to Yassine, the top cryptocurrency has seen tremendous growth in its transaction volumes since 2013 and it has reached $1.3 trillion transacted value and is only “an order of magnitude” away from that of leading processor Visa. Elmandjra, however, agrees that we cannot compare Bitcoin and say Visa or MasterCard in terms of their Base layer transaction volumes. But he also points out that that was never the intention. He then explained that approximately $3-4 billion worth of bitcoin was transacted on a daily basis in 2017 and the real deal in increased Bitcoin transactions isn’t in the volume, but in the total value, he tweeted. 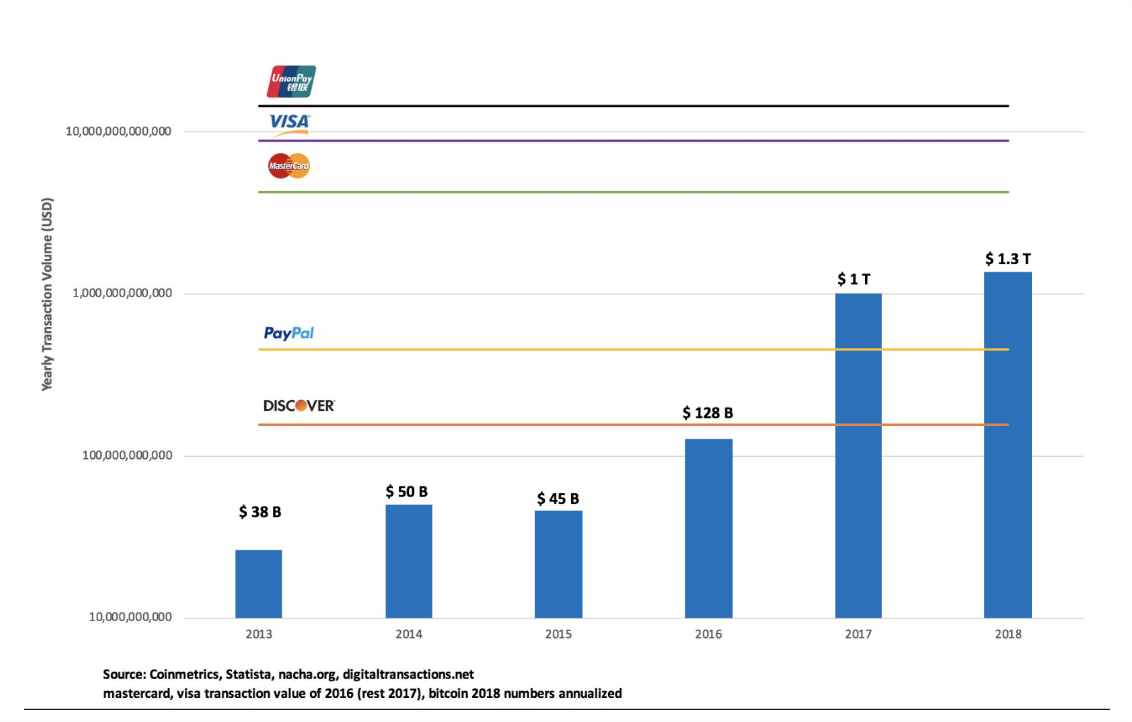 Although Bitcoin has seen $1.3 trillion worth of transactions in 2018, these figures are still way behind in comparison to those Visa and Mastercard has recorded over the years. Visa handled over $8.9 trillion worth of transactions in 2016, putting the U.S payment giant seven or so paces ahead of bitcoin’s current numbers. Data from as far back as 2015 shows that Bitcoin has experienced a tremendous growth rate in terms of transaction value. The top virtual asset reached peak values in 2017 as it saw an increase in transacted value nearly eight times more than what is recorded in 2016.

Although the distance from Visa is still pretty wide, the momentum seems to be favoring a chase from Bitcoin, meaning that what appears impossible at the moment may actually happen in the near future. Bitcoin transactions are expected to continue growing in 2018 and beyond. If it records a performance that matches its 80 percent yearly growth compared to the last five years, it will put itself in a very strong position to challenge Visa. Bitcoin could reach Visa numbers with the implementation of the Bitcoin Lightning Network (LN), practically overtaking it thereafter. By then, the leading digital currency could theoretically be able to handle more than $13 trillion worth of annual payments.

Bitcoin has been subject to debate on its scalability and it needs to find solutions to its scaling problems if it has to compete with the likes of Visa. However, there are some who believe that the original purpose of cryptocurrency was never to compare or compete with these traditional payment processors. Whatever the case be none can deny rise of bitcoin.

Bitcoin has bought cryptocurrencies to the world stage and is threatening the traditional payment processors head on. But a lot still needs to be achieved in terms transaction volumes. A lot would be covered as Bitcoin Lightning Network would be launched but it would still need regulations to fall in its favor for ultimate growth.

Will Bitcoin be large enough to defeat Visa in near future? Do let us know your views on the same.