Ever since the explosion of the Bitcoin price the conversation about blockchain and energy has been centered on the Proof of Work. The lion share of Bitcoin mining is located in China because of the heavily subsidized energy system and the widespread use of cold power plants. This has long given a bad reputation to the blockchain industry in the face of mounting pressure from environmentalists’ groups for a greener market.

Yet, there has been a long understanding by industry experts that blockchain could actually make the energy sector more efficient. The market by its very nature is segmented into multiple parties along the supply chain such as exploration teams, extractors, distributions, infrastructure, and many more. This has been identified as a potential field of disruption for blockchain companies looking to improve logistics and tracking of a complicated system of delivery. There are many links where this could happen from the trading of energy commodities, tracking, and transportation to the peer electricity market.

What is the state of the energy market? 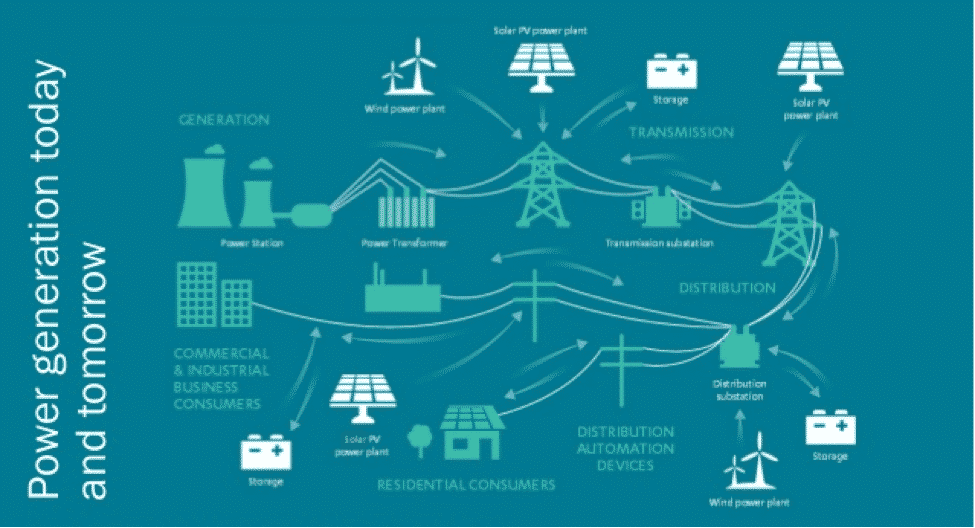 The energy sector has essentially worked the same way for the past forty years. There are three parts to it, first the upstream providers which process the raw materials into energy, gas, oil, solar, wind, etc. Then we have the suppliers who take the energy and bring them closer to the consumers. Lastly, we have the downstream generators that need to distribute energy to the retail consumers. Divided into these three simple parts, the industry appears very simple, but this is far from true.

The final consumer never buys from the producer of the energy, in most of the western world, the primary producer sells to the companies that own the power grid who then delivers the energy to a local distribution company. The distribution company then uses further subsidiaries that fragment the market into states, cities, towns, and even neighborhoods. The result is small increments in the price for every party taking a cut and an immense level of complexity which leads to waste and inefficiency. On top of all that, the primary producer of energy is a link in the energy commodity supply chain. The oil, natural gas, coal, etc it uses are also brought to the energy plant from somewhere else with added costs and complications.

Most of the energy commodities for production come from outside major energy-consuming countries. Oil and gas travel hundreds of kilometers by sea to reach ports in dozens of countries. Very few of these are energy self-sufficient and have to rely on a vast industry of shipping companies and commodity traders to buy the raw materials.

Finally, there is a complex web of taxes, incentives, and government subsidies which determine the final price. The average electricity bill for a family is priced differently than for an industrial zone or a retail center. Blockchain can not only improve governance in this aspect but in many other ways.

This article contains complete information on how blockchain is positively affecting the government of nations.

All of the above-mentioned links in the energy supply chain are ripe for blockchain disruption. There has been a long understanding that supply chains are one of the most promising use cases for blockchain in the world. The distributed ledger is perfectly suited for multiple parties in need to track goods over long distances and smart contracts have the ability to automate bill collection implementing better subsidiary policies for crucial industries.

For a complete explanation of crypto mining and its costs read this article.

How has blockchain impacted the industry so far?

Right now there are over one-hundred and forty projects directly tackling the energy industry in the blockchain world. They are both being built in public networks such as Etehreum, or in enterprise close blockchain of various industries.

The main focus of these projects are things such as billing and payment systems, token usage for investment, energy commodity trading, carbon certificates market for polluters, electrical grid management, supply chain tracking, green energy certification and many more to come.

The industry has taken note and these projects are receiving both industrial and government support as the change they promise is a net positive for all parties involved. The market stand at a pivotal point as the outside pressure for climate change is forcing us to change our practices and better our energy production.

What is blockchain doing now?

Commodity trading is one of the first areas blockchain is making an impact. There exists a large market of energy commodities that is monopolized by a handful of large trading firms. Here blockchain can bring new transparency and liquidity to a sector of the economy often obscured and difficult to understand. There is also the possibility of trading carbon credit and green certificates that are validated through the blockchain.

Streamlining supply chains is another great opportunity. One that is being exploited by the ION token, an ERC-20 standard meant for use in the Catalan region of Spain. The token will incentivize the local energy production industry while allowing for a more efficient supply and distribution chain for the local population.

A peer to peer energy market is one of the great promises of blockchain. Energy use is not equal across sectors of a population. Seasonally certain industries and consumers experience upticks in energy needs of downturns. Normally a central system tries to cope, but there is a lot of waste involved. Electrify Asia is a peer-to-peer electricity market where participants are able to sell their excess energy and buy it on a transparent secondary market. The Singapore based company attracted a lot of attention during its ICO in 2018 and already has a working platform for the APAC region.

The energy sector is poised to be disrupted by the blockchain industry. This is perhaps one of the sectors that will be transformed the most in this economy and lead to the widespread use of crypto-economics. It seems almost fitting since mining has always been a contentious subject for the claims of critics that is a wasteful system. The advantages blockchain will bring to the market will redeem it in the eyes of the public.