Today, you are in for the review of a project that promises big claims with big talks but in original is nothing but entirely superficial. World’s second largest cryptocurrency Ethereum is a platform on which decentralized applications can be built. This new ICO is forking the Ethereum has come into the picture with the promise to present a much better and faster version.

Really? Well, let’s see, how it achieves it? Let’s dive into our EtherInc ICO Review to understand just how good it actually is!

EtherInc : Is there any original code?

EtherInc is the fork of Ethereum which is created with replay protection that has all the capabilities of the Ethereum blockchain while improving it in a number of ways.

What are these improvements?

The company claims to reduce the block time from 15s to 6s,  and don’t you think if it has been so easy to achieve, Ethereum would have done it itself. Apparently, they couldn’t!

Second, the alleged 6s doesn’t hold any proof. Actually, there is nothing on how the team plans to achieve this.

We would really like to know the answer to “How”!

Moreover, the improvements would be in network transaction per second by 2.5x and transaction confirmation speed by 2.5x, which are kind of the same thing.

As for increasing the miner reward by 2.5x, that doesn’t hold any value to the network. Removing the uncle reward disincentivizes small pools to mine which increases the centralized mining while reducing the security.

Implementing the finite supply for mineable coins is a nice touch but again it is not an improvement.

Citing the lack of bandwidth, higher GAS price, and scalability issues in Ethereum blockchain the reason behind EtherInc blockchain, the team doesn’t even talk about solving these issues.

The whitepaper of EtherInc ICO comprises of fillers. Instead of talking about the real deal, it’s all on the surface things.

When we took a look at the GitHub repository of the project, out of the 12 additions, 11 of them are the fork of Ethereum’s blockchain, explorer, plugin, and wallet.

There is no information on the budgeting of the token sale funds, which is another point against them.

The EtherInc team comprises of 8 people that involves developer, graphic designer, marketing manager and compliance officers with half of the team having experience of working with big players in the market though in what capacity, no idea, while the other half doesn’t have much to brag about.

Tarun Malik – CEO, A graduate of the Melbourne Business School, he has previously worked with PwC, SwissRe, Johnson & Johnson and Biogen.

Suryansh Kumar – CTO, Suryansh is a college dropout who has founded a number of products like Piplity, OBTrack, and Codepanel.

Cernat Constantin – Blockchain Developer, Cernat is a software developer who has previously worked at Bitron, Biesse Solution and Continental AG.

The team is heavily marketing focused. You can tell this from the fact that its GitHub page doesn’t have any contributors but its Telegram group has over 14k members. Not to mention the fact that the team members don’t have much experience in the technology field.

The ETI (EtherInc) Coins are the crypto fuel and the driving facilitators for the EtherInc blockchain. These coins will be used for a number of reasons, for starters, you would need them to pay transaction fees. Moreover, ETI coins will be used to deploy elnc organizations, create elnc proposals, pay salaries and make payments, vote on proposals, run Dapps, and conduct ICOs (DAICOs) on its blockchain.

“EtherInc Blockchain was created as a fork of Ethereum on block 5078585.”

EtherInc ICO is developing their own blockchain and has already launched its Mainnet and Ropsten (a test net)in February. According to the team, they have launched about 7 nodes in Mainnet and 3 in Ropsten as available on the GitHub.

The blockchain network of the EtherInc has an inbuilt programming language which means anyone in the ecosystem can create smart contracts and decentralized apps with its own transaction formats and transition functions.

The project provides a whitelist and follows a KYC requirement while mentioning the restricted area to be the USA.

The company is Australia incorporated which has in the recent time started defining regulatory framework on cryptocurrencies and ICOs while clamping down on the fraud ICOs on the way.

The team has 8 advisors who are from different sectors viz. Technology, Marketing, and Finance and have worked with big industry players as well.

Out of the total supply of 997,528,142 ETI, 9.78 percent i.e. 97,528,142 ETI will be distributed to the ethereum holders in the ratio of 1:1 at the time of fork. About 45 percent of the total token supply will be up for coinsale. 100 million ETI coins will go to strategic partnerships to build and foster ETI ecosystem. About 10 percent of the share is allotted for future development that will be vested for 5 years and another 10 percent for startup fund that will register their organization on einc.io platform.

As for the community activity, the project is available on Twitter with over 5k followers, Bitcointalk, Youtube, Medium, Reddit, GitHub, and Mail. They have close to 14,500 members on Telegram. 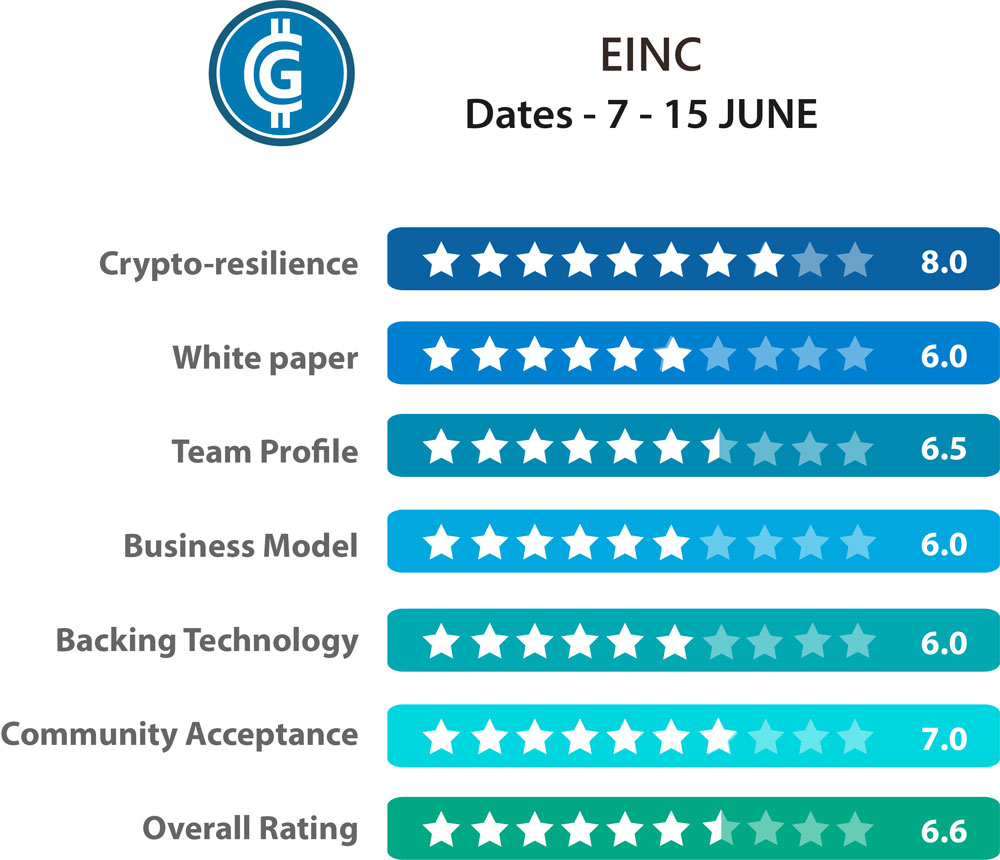 The roadmap of the project starts from the Q3 of 2017, comprising of eInc Dapp, blockchain, wallet, and mining, which are all the fork of Ethereum. Right now, it is a community building stage and starting the sale.

The project doesn’t propose valid and substantive improvements on the fork, even the founder of the project couldn’t provide with an answer to what exactly EtherIc can offer that Ethereum can’t.

“The major difference between Ethereum and eInc is that eInc is not just a blockchain to run applications and smart contract but run organisations. eInc is an ecosystem where decentralised organisations can flourish.”

Wow, that’s meaningful and explanatory, at its worst! What’s different in this than deploying a smart contract on ethereum blockchain.

A note to investors: A flat ‘No’

An ethereum fork with nothing new as a result. Every single development in the project as of yet has been fork of the Ethereum with no additions from the EtherInc.  A team with no technological or blockchain specific interest, overall it looks a good marketing and packaging.

The white paper doesn’t provide any value, just fillers. The team seems to be taking advantage of lack of knowledge in community regarding Ethereum and is presenting everything Ethereum offers in a new packet.

We have a team of robust professionals who rate the ICO projects in completely unbiased manner.

Want your ICO to be reviewed by Coingape? Let us know

Student Coin: A Post-COVID Solution to Raising Student Financial Loans!
The global COVID-19 pandemic has affected the normal way of life as finances, workplace environment, education and other…

Quanta Networks ICO Review, Rating and Complete Analysis
No one enjoys paying a ton of cash for slow, unreliable Internet services. And while paying more to…

YPTOSPACE ICO Review, Rating and Complete Analysis
In the past few years, a significant number of ICOs came up with ideas of building revolutionary ecosystems…

CryptoProfile ICO Review, Rating and Complete Analysis
Scams, stiff competition and lack of funds have forced many promising ICO projects out of business in the…
Stan Peterson 309 Articles
Being an active participant in the Blockchain world, I always look forward to engage with opportunities where I could share my love towards digital transformation.
Follow Stan @