The music industry is growing at a rapid pace with the global digital music revenue growth rate of 17.7%. Given the way the digital music industry is and will be evolving, this new ICO is entering the market with a lot of potential. By creating a new digital music ecosystem as a move towards decentralization, Muzika is planning to undertake the role of existing intermediaries and actualize a fair distribution structure. So, let’s dive right into out Muzika ICO to know all its worth!

Muzika is entering into the crypto world to tackle the challenge of musicians and fans being the real value creators in today’s music industry but not being rewarded properly for their value creation head-on.

In this world where musicians aren’t getting their dues and fans are “pigeonholed as consumers” while intermediaries take up the profits, Muzika is aiming to bring innovation to the value chain in the digital music industry.

The plan is to “reform how value is created and captured by various players within the industry.” The rewards will be returned to those who create the value while recovering the share lost from digital piracy through blockchain technology.

Muzika provides a detailed and clear information through its explanatory whitepaper. With a professional feel to this document, it further offers a detailed study of the music industry, its value and growth. The technical aspects of the blockchain technology are also covered with ease while presenting the facts with data and charts.

The software demo of Muzika Studio v0.1.0 has been made available to the public for download for different devices viz. Mac, Windows, and Linux. 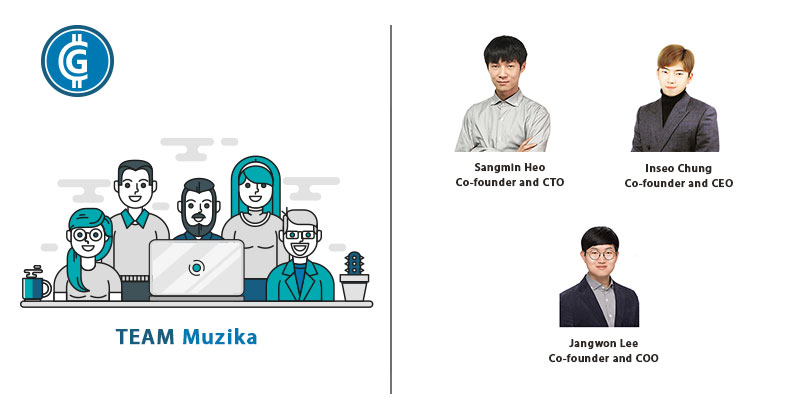 The start of the Muzika team is a good one as its co-founders are one of the youngest and successful entrepreneurs. Averagely aged at 22, all of them were awarded Forbes 30 Under 30 Asia 2018.

Inseo Chung- Co-founder and CEO: Chung is a serial entrepreneur with experience of both the music and blockchain world. A professional pianist, he won the 2nd place in National Student Music Competition. He has also been one of the earliest Ethereum miners in Korea.

Sangmin Heo- Co-founder and CTO: With a degree in Computer Science, Heo has also been the global finalist at Intel Science and Engineering Fair. Apart from having relevant technical experience, he has been the sole developer of “The Bamboo Network”.

Jangwon Lee- Co-founder and COO: Lee has also co-founded Shadal Inc. and Youthglobe Korea while being a trilingual entrepreneur with global networks. He has a degree in business administration from Seoul National University. 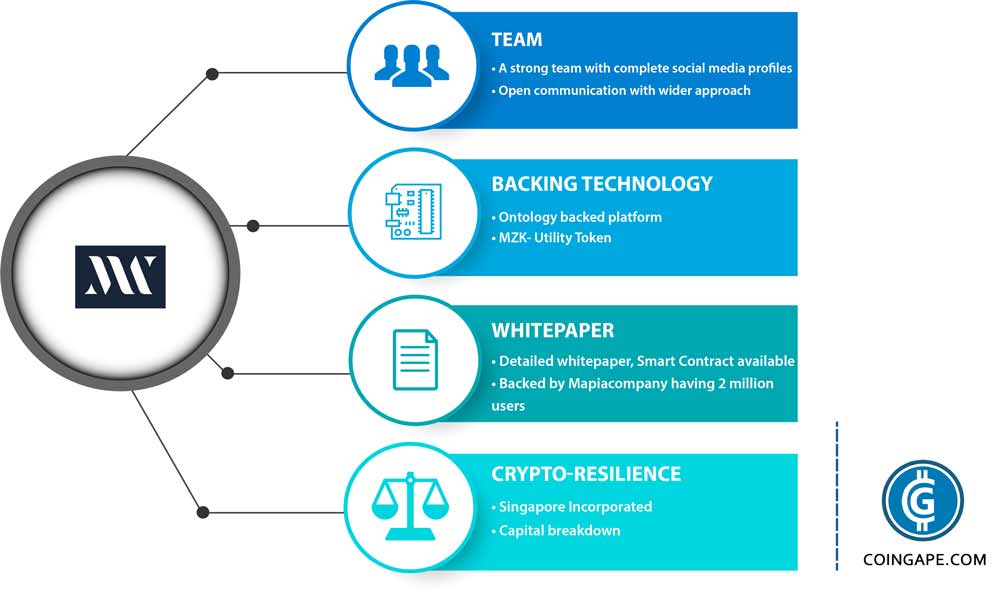 Muzika is backed by an already established platform called Mapiacompany that has about 2 million active users covering over 150 nations in terms of subscribers and artists from more than 30 nations. Now, in order to create a loyal and incentivized community, the company is going the blockchain route.

Drawing inspiration from popular Steemit project’s community, the Muzika Coin (MZK) has been created. The sole medium of exchange within the Muzika ecosystem, it will perform four functions viz. community building, means of transaction for commercial items and service, sponsorships opportunities, and community programs.

In order to obtain MZK, there are three options namely, participating in the ICO, cryptocurrency exchanges, and loyalty points.

Muzika is leveraging the Ontology platform to built its decentralized project. With a focus on transparency and security, the selection of Ontology platform works just fine for the project. As for the smart contracts, the team is first trying to grasp the functionality and implementation procedure.

The project is Singapore incorporated while the company behind Muzika is Korea-based which is not only equipped with the leading edge in digital technology but the Korean music market is also the 10th largest in the world by revenue.

With about 12 advisors listed on its website, it has covered all the points. With names like Michael Cho – non-executive Director of Kakao, JoonKee Hong- non-executive Director of Kakao Bank, Yoonwoo Lee – (EX) CEO & Vice Chairman of Samsung Electronics, and Stella Kung – CMO of QTUM among many others, Muzika has created a good long list of advisors.

Out of the total 1 billion MZK tokens, 20.5 percent i.e. 205,000,000 tokens will be up for sale. The major chunk of the tokens i.e. 40 percent is allotted for the reward ecosystem. Partnership and team both get 10 percent each of the MZK tokens. About 14.5 percent will go to reserve while remaining 5 percent is for advisors.

The company offers a good reach to its potential investors via Reddit, Facebook, Twitter, Medium, and, GitHub. The Chinese Telegram channel has over 280 members while the English version has about 2,160 members and the Korea version has more than 1,480 members. The idea to revolutionize the billion-dollar music industry while targeting its pain points, the project is onto a good start. It further moves forward with a strong and experienced team while offering the audience its software demo. Moreover, the team has presented a well-laid out and feasible roadmap that represents a progressive growth.

A key point worth noting is the existence of a platform with 2 million users behind Muzika that is leveraging the decentralized nature of blockchain technology.

We have a team of robust professionals who rate the ICO projects in a completely unbiased manner.