Is it bitcoin correction? Is it people reaping there profits ahead of Christmas? Or is it just a sign of end!

One who live in cryptocurrency world knows exactly who drives the current market of cryptocurrency. There was a time when Bitcoin price rose  to $ 1000 from $100 and crashed or corrected after days to $ 200. 80 % fall ever since king of currency has been on highway road not stopping for once , sometimes it takes breaks and then another high.

Bitcoin is quite volatile there is no doubt about it. New buyers and entry of regulated exchanges is just the beginning what  we are looking at is sunrise not the morning. 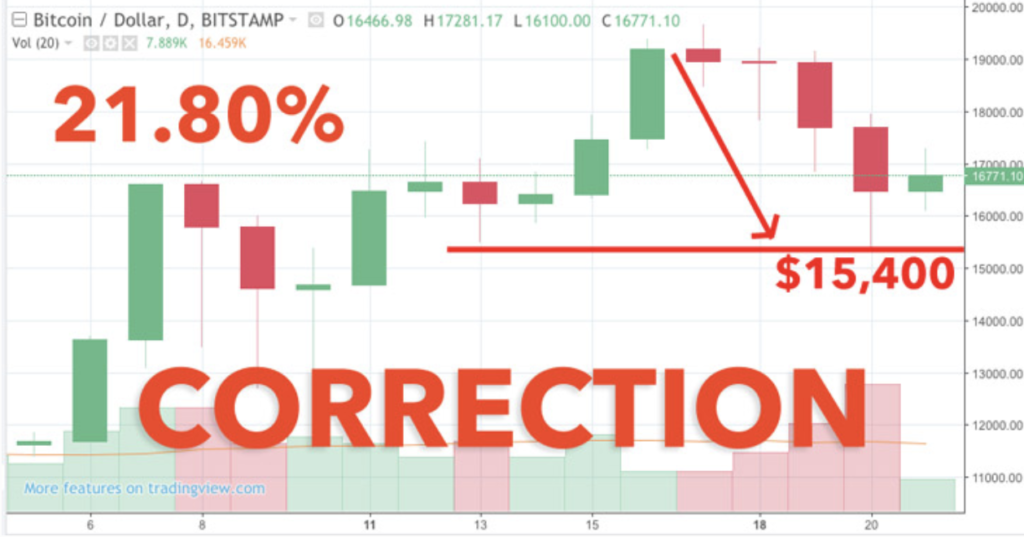 As you can see in the above chart bitcoin bullish market could not withstand selling from the investor looking for profits those who have entered at $ 10 K.

On the other side prices moved up creating a bullish pattern breaking the 13434 resistance and now is at $ 15 K.

After our research we found out following possible cases that might have led to recent breakdown.

Everyone is aware of  what is bitcoin? but most of the non -tech users do not have any idea that the Bitcoin currency which they use is not same anymore. Bitcoin cash is the real economy as described by the unknown founder ”Satoshi Nakamoto” as claimed by Bitcoin cash that they are more reliable and less fees on the network which is true also as compared to Bitcoin cash you the avg fees is around $ .9 to $ .10 but in case of bitcoin you cannot move smaller  than $100.

Recent hacking of exchanges , nicehash , bitfinex, and various small exchanges have been hacked due to the central nature of services they run, one gets access to their servers can end up eating everyone bitcoins.

in futures market has recently started where major regulated exchanges has teamed up to provide safe and secure environment for trading with real and professional players of the market which might be futile for bitcoin.

Coinbase introducing Bitcoin cash  theorist suggest that when bitcoin cash was introduced there were spikes in prices and somebody from the inside leaked the information about the trade timing. Coinbase is blamed now for helping bitcoin cash to gain pump in the market.

Another important reason to follow Bitcoin fees are soared up to $100  to $1000 to transact, Merchants are now moving to Bitcoin cash which is cheaper to use and less fees.

Bitfinex becoming next Mt Gox. People are starting to scream about it.

Artificially  pumping the  market can fundamentally shift the values all together can destabilize the market. Anyone familiar with the 2007-2009 financial crisis is well-aware of the bail-outs. Trillions were printed out of thin air to prop up the US economy. BTC is being propped up by Tether?. Is 6% to 17%+ of daily BTC trading volume enough to move its price? This post is  not about BTC being–or not being–propped up by Tether. It’s purely about fake money being used to buy legitimate valuable cryptocurrencies, which can be turned into USD or used to purchase real goods and services.

Believe it or not this year almost everyone is doing their own hard fork which is good for creating competition but shows lack of integrity within the Bitcoin community. There were so many forks some failed, few turned out to be frauds and some are lagging behind. New comer is confused which currency to work with.

Bitcoin developers promote that bitcoin is in development phase and not even version 1 is released. This kind of beta testing have a stop.

The so called correction!

Bitcoin is right now volatile and is still a good investment you can make. Bitcoin is a software which is overvalued in human history , the unknown founder of Bitcoin wanted everyone to use bitcoin for micro transactions. Market repeats , psychology is simple push market down so that more can buy which is known as correction.

This is just the opinions of the author and is subject to market condition. Do your market research before investing in cryptocurrencies. The author or the publication does not hold any responsibility for you personal financial loss.

Facebook Twitter LinkedIn
Achal Arya
516 Articles
I am an entrepreneur and a writer with a bachelors degree in Computer Science. I manage the blockchain technology and crypto coverages at Coingape. follow me on Twitter at @arya_achal or reach out to me at achal[at]coingape.com.
advertisement