Bitcoin’s consolidating price has proven to be a good sign for the traders to begin accumulating. This trend is also gaining strength among Institutional players as Bakkt noted record daily trading volumes.

Institutional investors and their interest in Bitcoin futures are driving growth on derivatives exchanges like the Chicago Mercantile Exchange and Bakkt. Interestingly, the Bakkt Bitcoin futures volume hot a new high of $172 million in physically-settled Bitcoin, as per data provider Skew.

“Another record day in the books for our physically delivered futures:

15,955 Bakkt Bitcoin Futures were traded today, representing over $200M of volume and a 36% increase from our previous all-time high Chart with upwards trend.”

Bakkt’s Bitcoin futures reported minimal activity for the longest time in 2020 and has finally shown an increase in volume, suggesting the institutions may be warming to the current Bitcoin market. However, its volume lags compared to CME, which was reporting a daily volume of $262 million on 16 September. While other prominent retail derivatives exchanges like Huobi and OKEx.

Although the daily volume of physically-settled Bitcoin was at a peak, according to another data provider, Ecoinometrics noted that “the number of Bakkt contracts held for physical settlement in Bitcoin at the end of each month is not growing.” 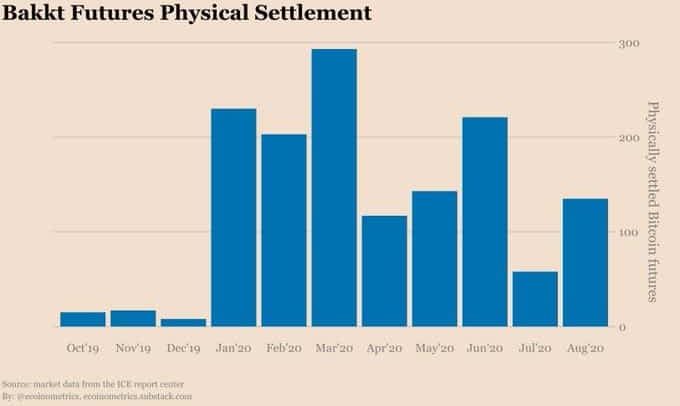 Bitcoin futures witness great action, but the 7-day volatility of the coin went down to levels unseen since the end of July. Even though a slight spike in price increased volatility, this low volatility phase was not seen in the Bitcoin market too often. Data researcher, Arcane suggested that low volatility could be an indication that Bitcoin will start moving soon.

Whereas the Bitcoin volume suffered another drop and was almost halved in a week. Even as the price climbed higher on the price ladder, the spot market needed to witness more on-chain activity to support a potential recovery for the leading crypto.