Amid the ongoing speculations on South Korea’s ban on cryptocurrencies, the Binance CEO, Changpeng Zhou came forward and said that the exchanges are still operational but the cryptocurrency market will get affected. Despite his numerous requests, the South Korean government has yet to give its confirmation.

The Facts about Cryptocurrency Regulation in South Korea

Today morning, few hours after CNBC and other media channels reported about a bill being prepared to ban all cryptocurrency trading in South Korea, Binance CEO Changpeng spoke about Korea regulations and its impact. In an exclusive interview to Bloomberg he pointed out that due to stringent regulations on bitcoin exchange and bitcoin mining in China, Binance shifted their business from China to Korea. Now, Korea is putting forth trading regulations.

He was quoted as saying:

“It does make a lot of impact on our business but I don’t think any particular effect. The Korean exchanges are still operating right now, it’s just that it’s a potential ban. We don’t know what is the extent of the ban. But it is impacting some of the Korean exchanges. We’ll see what happens.”

He further emphasized the potential of cryptocurrency market and mentioned that Binance still gets thousands of registration requests on daily basis.

Also, the Reddit community was quick to respond to rising speculations and fake news as reported by few media channels behind a potential ban on cryptocurrencies in South Korea. According to a source on Cryptocurrency handler on Reddit:

“I talked to my contact in South Korea who works for a major exchange, don’t fall into the FUD. The ban is ONLY applicable to exchanges that are not following the previous KYC regulations. DON’T SELL, THIS IS A BUNCH OF CRAP. No one is banning crypto, CNBC is just bullshitting us with overly dramatic lies.” 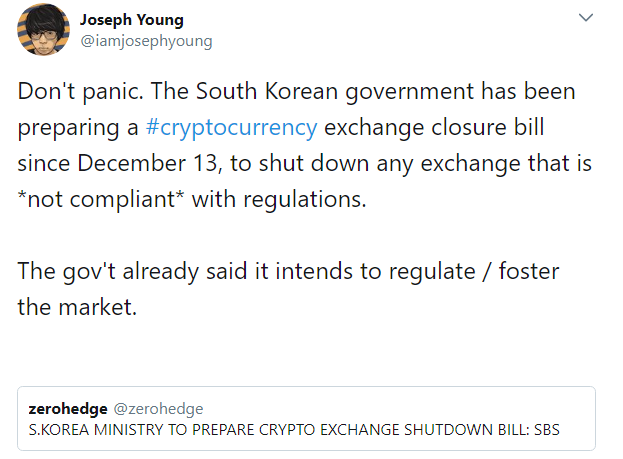 As a fact check, tax authorities and police have also been raiding the country’s largest cryptocurrency exchanges. However, this raid has been primarily due to the reason of tax evasion. Now, the South Korean government is trying to calm down the rising demand for cryptocurrency by proposing the proper regulation measures.

As a result of the potential upcoming regulations on cryptocurrency trading, Bitcoin price showed a decline of more than 12 percent. In response to South Korea’s preparation of regulating the digital coins’ trading, the major currencies viz. bitcoin, ethereum and ripple plummeted a great deal. The overall market cap of bitcoin declines from $245 billion to $233 billion in just one day. Following bitcoin, ripple loses 14% to trade a $1.74 per coin and ethereum falls 12%  to trade at $1,200.

So, you’re advised to be beware of the fake news and speculations. Follow the official Twitter handles and sub-reddits of various exchanges and authorities.

Mine Crypto On Your Phone In Just 4 Hours ->
Sponsored

To keep track of DeFi updates in real time, check out our DeFi news feed Here.