India is yet to onboard the blockchain friendly regulations that countries like Australia, Switzerland, Malta, and many others are already running on. Despite the harsh remarks from regulatory authorities in the past, Indian blockchain community is still doubling down on the budding blockchain technology and crypto-centric companies within the country.

Although India’s crypto and blockchain industry are still in limbo, few prominent Indian blockchain enthusiasts are playing hard to assist policy makers/Govt agencies in signing in the friendly blockchain regulations. One such enthusiast is ‘Akshay Aggarwal’, co-founder of Blockchained India, an open blockchain community.

Akshay Aggarwal with his Blockchained India team has successfully voiced the opinions of the Indian blockchain community through open town halls that captured top-bulletins just last month. These open town halls, The Blockchain Roadshow conducted across Indian cities is now a draft of blockchain regulations report being presented to lawmakers through their upcoming conference – The India Dapp Fest 2019.

The scale of the Blockchain rally exceeded all expectations when the intended 4 city Roadshow extended to 7 cities gathering the views of 1000+ blockchain professionals in Delhi ( on March 2),  Mumbai (on March 9), Hyderabad (on March 16), and Bangalore (On March 30) along with Kolkata (on April 6), Ahmedabad (on April 13) and Goa (on April 19).

“We have found Delhi and Bangalore to be the most mature ecosystems. The enthusiasm, especially in Delhi, is another level altogether. Though when you look specifically at enterprise blockchains, Hyderabad comes quite close to Bangalore. This is due to the initiative of the Telangana government to form a blockchain district.”

Since the underlying vision behind the street show is tagged with ‘Does India need crypto regulations?’, the news achieved mainstream media attention. As India’s connection to crypto & blockchain industry is something that has raised the eyebrows of other countries which positively entered its friendly zone.

Mr. Aggarwal who is now a famous public figure in Indian crypto & blockchain industry has been invited by Switzerland’s crypto community as a part of a Bi-lateral Delegation to assess, discuss and understand the blockchain-friendly regulations defined by different bodies working in the Swiss environment. Soon to experience blockchain tour to Switzerland, Mr. Aggarwal will have an in-depth discussion with Swiss govt. officials, top VCs, startups and independent communities on benefits they’re leveraging from blockchain friendly regulations.

Mr.Aggarwal’s Swiss tour will pave the way for upcoming regulations India is soon to outline for its blockchain landscape. Moreover, in-person meetings with the Swiss-based investors, startups, govt officials will further enhance the draft policy already prepared in lieu of road shows.

If you’re still unfamiliar with what Blockchain roadshow/ Town Hall meetups brought since so long, do check it out at the website.

Why India Dapp Fest’19 is Crucial for Indian Blockchain Ecosystem?

Also, worth to mention that they are the same team who were able to bring ConsenSys and Joseph Lubin to India last year. Buzz says that India Dapp Fest is all set to host many global blockchain visionaries, the next Joseph Lubins in the making. 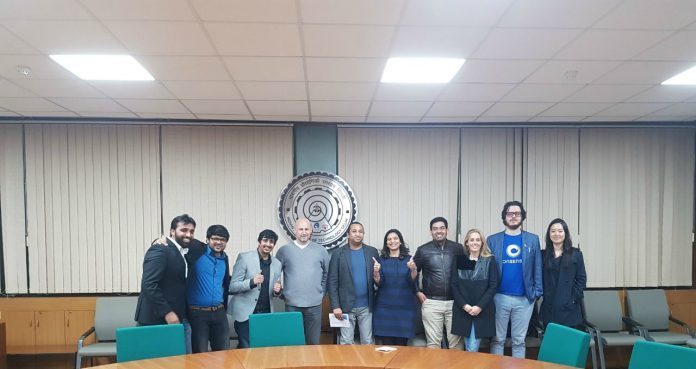 With India Dapp Fest’19, Blockchained India team connects the voice of every Indian whose breathing blockchain and crypto and seeks to establish India as the largest blockchain and crypto hub. With extensive on ground research across the country along with the Switzerland tour, this one-of-its-kind initiative is hoping to create tangible impact and catalyze blockchain innovation in the country. India Dapp Fest’19 is all set to launch the blockchain-friendly regulation report and influence legal authorities to welcome this revolutionary technology and honor everyone who has contributed to its innovation in the country.

You can book your spot to India Dapp Fest and see what Indians are up to in terms of blockchain friendly regulations than relying on rumors or person related to the source.

US Youth More Interested in Crypto Than Mutual Funds
Stan Peterson
1100 Articles
Being an active participant in the Blockchain world, I always look forward to engage with opportunities where I could share my love towards digital transformation.