Poly Network, a cross-chain defi protocol that suffered the largest defi hack amounting to $610 million has decided to award the hacker $500,000 as a ‘Bug Bounty,’ as per a report in Reuters. The hacker managed to exploit a cross-chain verification signature to drain funds into three accounts on three different blockchains. The Defi protocol alerted exchanges and miners about the hack and requested them to freeze transactions originating from the hacked address.

As our communication with Mr. White Hat is going on, the remaining user assets on Ethereum are gradually transfered to the multisig wallet (0x34D6B21D7B773225A102b382815e00Ad876E23C2) requested by Mr. White Hat. pic.twitter.com/FdSfJ6ZIUt

Poly Network requested the hacker to return the funds, which were obliged and the attacker started returning the funds starting a couple of days back. The defi protocol confirmed earlier today that the majority of the funds have been returned. It dubbed the hacker “white hat” in its address suggesting they are in continuous touch as the funds are being processed. 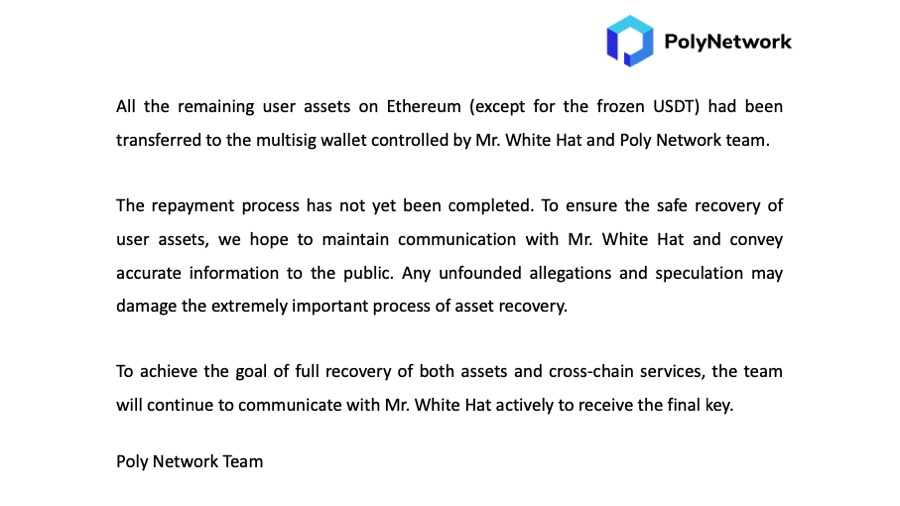 The heist is being deemed as the largest in crypto history while highlighting the security vulnerabilities in the defi ecosystem. The hacker behind the network tried laundering the stolen amount but due to the risks involved in laundering such high amounts, he decided against it. The EtherScan copy of the transactions made by the attacker even claimed the exploit would have been in billions had he decided to rug other “Shitcoins” as well.

The high popularity of the defi network makes it more prone to hack attacks as many new projects spring up in the defi market, gaining instant liquidity within weeks and then get rugpulled or exploited. Defi market’s security vulnerability could pose a roadblock in its rapid growth.