The DeFi bubble is huge and is growing fast. At the onset of 2020, DeFi projects attracted about $850 million. Six months later, the total value of funds invested in DeFi projects – also called total value locked (TVL) –is at $2.08 billion, a growth of about 145%.

Admittedly, DeFi is still in its infancy but the ecosystem is already shaping up. So far, the ecosystem revolves around seven sectors with decentralized lending taking the largest share of the market. 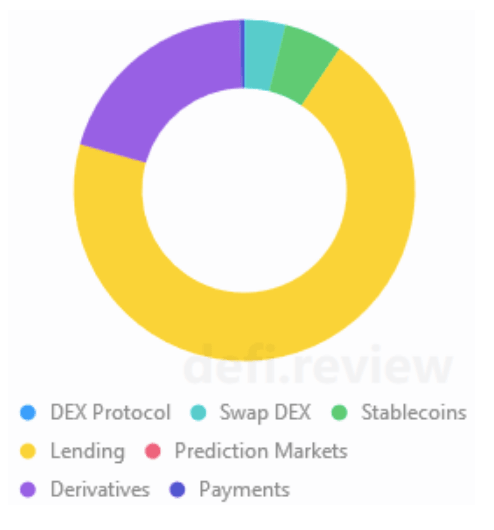 Compound and Maker Are Catalysts of DeFi Adoption

In every instance of growth, there is always a force that keeps pushing to higher levels. Just four years ago, DeFi was unknown and few projects showed much value. In fact, DeFi Pulse data shows that the TVL in the entire DeFi ecosystem was negligible. Then Maker burst onto the scene.

Maker made it possible to lend with smart contracts and, at the same time, allows the DAO community to play a major role in the decision-making processes. However, the MakerDAO protocol is in charge of actual loan issuance. The borrowers too have a clear role in the MakerDAO community. They supply collateral, which is critical in minting of new DAI digital currency. As such, this is a huge and self-supporting community that, ultimately, will expand the circulation of DAI.

Because of Maker’s first mover advantage, the DeFi lending application claims the second-largest share of the decentralized lending niche. At the time of writing, Maker had $626.2 million in TVL. Until recently, it held the record for the platform with the highest TVL, only for the spike in the demand for Compound lending protocol and COMP, its governance token to relegate it to second place.

Compound users can borrow as many as nine digital currencies, which can also be collateral. So far, Compound protocol has given out about $908 million while taking in approximately $1.6 billion in collateral. Dai, USDC, and ETH are the most on demand tokens for borrowers respectively. The same is true on the supply side.

Compound Is the New Kid On the Block

Before Compound launched, Maker was the largest decentralized lending project. Interestingly, COMP’s price shot through the roof, by 150%, in a single day because Coinbase announced its listing. On June 18, Coinbase revealed on its official blog that COMP would become available on Coinbase Pro beginning June 22.

At the time of writing, COMP had $679.8 million in TVL, according to DeFi Pulse data. Compound’s rally shows just how much potential there is in DeFi. Question is, can other projects emulate or even better Compound’s remarkable achievements?

As earlier discussed, the DeFi phenomenon is just beginning. For instance, the total value locked in DeFi grew by about 198% between April 12 and July 9, 2020. This implies the ecosystem has opportunities for newer projects such as KAVA to thrive. And as noted earlier, the lending sector of DeFi has the most traction.

Kava, a Hidden Gem of The DeFi Bubble

Just as Maker and Compound’s success stories center around their penchant for a community-based decentralized borrowing infrastructure, Kava has also subscribed to a progressive decentralized framework by putting users at the helm of governance. However, unlike a majority of new DeFi projects that often replicate protocols and lack the sort of innovative edge required to deliver long-term successes, Kava has introduced new paradigms potent enough to give fresh impetus to the DeFi narrative.

First is its decision to implement a cross-chain lending facility, thanks to the dynamics of the Cosmos SDK. Opting for a modular blockchain design framework with advanced interoperability features allows Kava to evade growth restrictions and support more than one digital asset, including BTC, BNB, ATOM, and XRP.

Without any doubt, Kava’s cross-chain functionality enables a unique advantage that lets it support blockchain networks with communities that are arguably larger and more vital than that of Ethereum. For instance, Kava stands a chance of attracting around $3.6 billion TVL if it manages to capture 2% of the $170 billion worth of bitcoin, which can potentially flow into the DeFi market. Another $600 million is available for the taking when its shares of the XRP and BNB DeFi market reach 5% and 10% respectively. Not many DeFi projects boast this impressive level of growth potential – not even Maker and Compound, whose growth solely relies on the Ethereum ecosystem.

Unsurprisingly, experts and top media houses, like Cointelegraph, have begun to notice the growth potential of Kava. In an article published on Entrepreneur, Jennifer Spencer, CEO of Energent Media, called it the “Uber of Bitcoin.” Another publication, authored by Andrew Rossow and found on Cointelegraph, praised the unique user-centric model that sets Kava up for success.

Regardless of these media hype, there are no crypto ranking systems accurately detailing the real value of the Kava ecosystem and its token, KAVA. Data on CoinMarketCap do not reflect the over $111 million worth of KAVA staked on the platform, and DeFi Pulse has a problem with capturing the token because its protocol works only with Ethereum-based tokens. However, according to lead engineer, Kevin Davis, it is quite possible to have Kava feature on DeFi Pulse. He explained that “Listing Kava on DeFi pulse is very similar to adding an Ethereum project. Each kava full node exposes the necessary endpoints to display the data that DeFi pulse needs, similar to how Ethereum nodes (like Infura) can be queried to display stats for Ethereum based projects.”

Therefore, the data out there represent a small fraction of Kava’s budding economy, which is why it remains one of the hidden gems of the DeFi landscape.

✓ Share:
Disclaimer
The presented content may include the personal opinion of the author and is subject to market condition. Do your market research before investing in cryptocurrencies. The author or the publication does not hold any responsibility for your personal financial loss.
About Author
Andrey Sergeenkov
Cryptocurrency investor and trader. As an independent journalist, he covers DeFi, crypto, blockchain, and crowdfunding.
Twitter LinkedIn

How Centralized Exchanges Have Evolved in the Last Decade

Polars.io Beta Testing: Community Lends a Hand in the Platform’s Development
The Polars.io protocol is currently undergoing its Beta testing in…

Smart Staking With Ethbox
Looking to cash in on that new process of cryptocurrency…
Andrey Sergeenkov 17 Articles
Cryptocurrency investor and trader. As an independent journalist, he covers DeFi, crypto, blockchain, and crowdfunding.
Follow Andrey @
Twitter LinkedIn