The US Presidential Election 2020 is on the verge of conclusion as the final votes are being counted in. The early projections suggest former vice-president might have an advantage over the current president Donald Trump. Financial markets often tend to react sharply in accordance with the key political events around the globe, and the US Presidential election is definitely an event of great importance.

The United States of America plays a pivotal role in the international trade market as the US Dollar is the default currency of trade. Thus, the outcome of the elections would have a far-reaching impact on many international monetary policies. The traditional markets show a significantly higher level of volatility during these times.

Could US Election Results Be The Trigger for $20k Bitcoin Price?

Bitcoin is currently trading at $14,504.80, a new yearly high and if it manages to break the $15,000 barrier there is no resistance until $20,000. The king coin has already broken out of the double resistance and looks highly bullish at the moment. 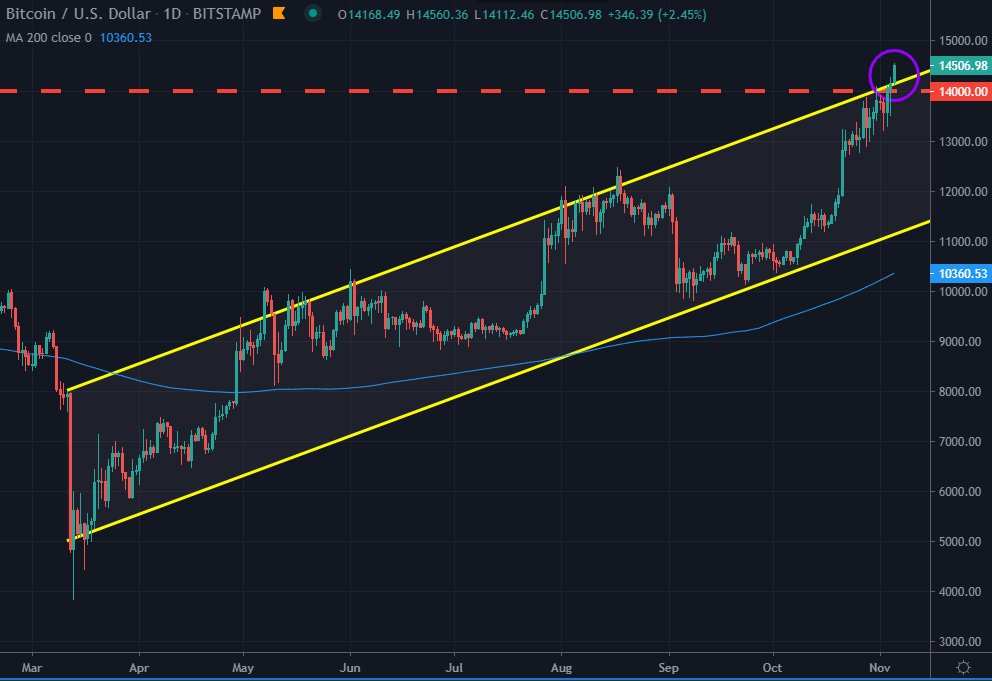 Although, there is no direct co-relation between Bitcoin price and the election result, just like any other asset class Bitcoin tends to react to big political events. We witnessed the same during the US-Iran tensions this year as well.

While traditional markets tend to sway by the election result because of the probable policy changes, Bitcoin could also see a great impact in terms of adoption and regulatory policy changes. Bitcoin will continue to rise irrespective of the result, but a President who believes in the technology that powers bitcoin would certainly help in raising awareness and adoption.

How Are US Elections And Bitcoin Prices Related?

During the last US Presidential election cycle of 2016, top stocks fell sharply including S&P 500 and SPX, which bounced back right after the election and reached all-time highs. While the markets are volatile this time around as well, but instead of seeing a fall in value, most of the stocks are in green and S&P 500 is up by 3% today.

Bitcoin during the last presidential election was not a household name and was trading near the $700 USD mark, however, a lot has changed in these four years as the king coin has managed to grab the attention of not just traders on wall street but also the federal government. Thus the outcome of the election could have a long-lasting impact on the digital asset market as well.

Bitcoin post its 2017 high has been searching for a similar bull run and the US Presidential Election could well be the trigger for the bullish momentum.

The Time Is Just Right For Bitcoin Bulls To Take Charge

Between the last US Presidential election and the current one, Bitcoin has seen a bull run in 2017, a bear market in 2018, and consolidation throughout 2019. Now, in 2020, Bitcoin is gearing up for another bull run which many believe would overshadow the peak of 2017. 2020 was slated to be the year of bitcoin because the Bitcoin block reward halving which commenced in May this year cutting the supply of bitcoin per block from 12.5 BTC to 6.25 BTC.

During the past two halving events, the price of king coin starts shifting momentum in 6 months to a year’s time. Another thing to note is that, during the last bull run in 2017, the price rose from nearly $7,000 in November to an all-time high of $19,783 in mid-December. Thus, if bitcoin manages to go past the critical $15,000 mark, we might as well see the all-time high for bitcoin in 2020 itself.