Bitcoin fee has gone down to great levels while SegWit adoption in bitcoin transactions reaches close to 40 percent. Amidst this development, BTC price is continuously moving down which according to Willy Woo, a bitcoin developer is expected to hit about $5,600 level.

Bitcoin might not be seeing the greens right now. However, it is certainly improving its status as a currency. This week, Bitcoin fee were at its lowest in almost seven years. 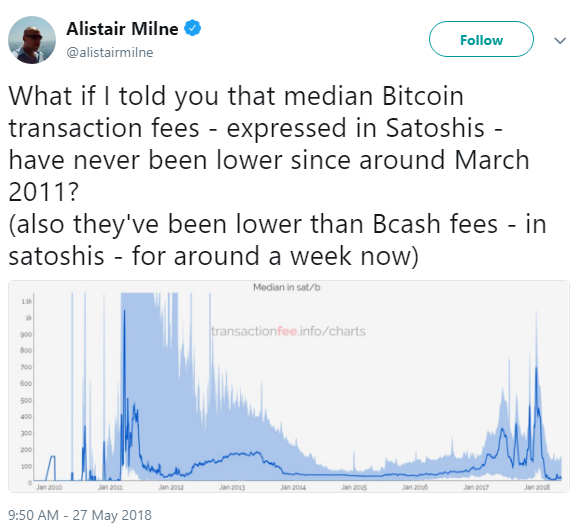 This not it, BTC fee even beat its competitor Bitcoin Cash (BCH), that’s right! BCH whose developers propagates of Bitcoin Cash as a lower fee alternative to the Bitcoin, got left behind. 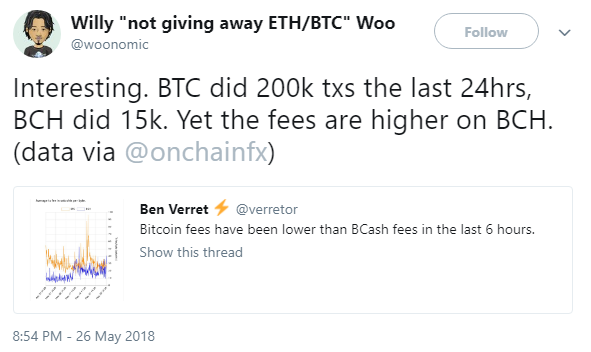 The news of lower fees came at a time when the adoption of Segregated Witness (SegWit) has been recorded to its all-time high. The share is soon going to reach 40 percent which is likely to be because of Xapo, a wallet and cold storage provider implementing the technology. 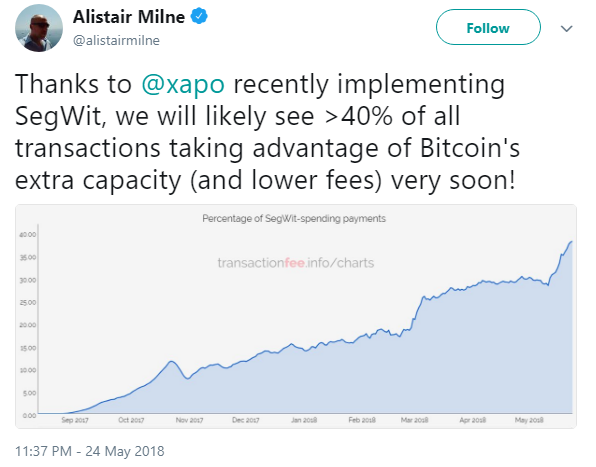 SegWit made its appearance last year, in August that allows for faster transactions and lower fees. Though it’s adoption started at a slow pace but it is gradually gaining speed.

Meanwhile, BTC price could drop down to $5,600 level, before making an upward start?

Willy Woo, who first got into the highlight when he defended Bitcoin over Blockchain at this year’s Consensus event took to Twitter to predict that BTC price will go even lower than February’s $6,200 low.

Most likely we’ll balance a bit, then we’ll slide through. Long timeframes here, looking into June for the rough timing of this to play out at the best guess.”

He further went on to describe how volatility and standards NVT are too high. Then he stated:

“2014 had a 2-phase drop. I doubt we’ll see that this time around. I think we’ll see this center section cut out. Next up cycle will take less time.”

“So in summary my best guess… slowish bleed down to $6800… then a steeper slide to $5700, then a levelling out of the drop… then a flat zone. This is an educated guess based on volume profile and fundamental data framing the rate of movement. /11”

What are your views on Bitcoin fee being at its cheapest and even lower than BCH? Do you think before making an upward start, Bitcoin price will drop down to $5,600 level? Share your thoughts with us!

advertisement
✓ Share:
Disclaimer
The presented content may include the personal opinion of the author and is subject to market condition. Do your market research before investing in cryptocurrencies. The author or the publication does not hold any responsibility for your personal financial loss.
About Author
Lauren
Lauren, a blockchain, and a cryptocurrency strategist has created a project of crypto price predictions for each month.

Lauren
23 Articles
Lauren, a blockchain, and a cryptocurrency strategist has created a project of crypto price predictions for each month.