European Union granted the company, a license of Payment Institution, making it the first Bitcoin exchange to be regulated in the US, Japan, and Europe. The Tokyo-based, bitFlyer is one of the world’s largest Bitcoin exchange and the first cryptocurrency trading platform that announced its launch in Europe. 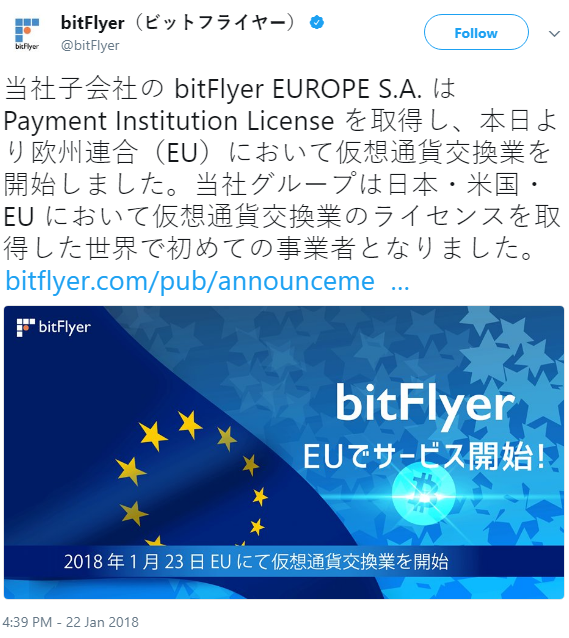 With more than 25 billion USD worth of bitcoins being traded on bitFlyer’s platform, the world’s’ largest bitcoin exchange handles about a quarter of globe’s bitcoin exchange volumes. Since the end of 2017, bitcoin is having a choppy ride. As per coindesk data, from the December high of about 20,000 US dollars, it has fallen down to 10,624.42 US dollars on January 22.

Now, bitFlyer is embracing the regulation that the cryptocurrency market fears is surely coming its way.

On Tuesday, the company announced that it has been granted the payment-institution license to operate in the Europe Union. After its regulatory approval in US and Japan, the company has gained entry in Europe that makes it the most compliant virtual currency exchange in the world.

The CEO of bitFlyer and a former trader of Goldman Sachs Group Inc. Yuzo Kano said in a statement:

“Approved regulatory status is fundamental to the long-term future of bitcoin and the virtual-currency industry.”

Last year, towards the end of November, bitFlyer expanded into the US market and made plans to open an exchange in Europe. This Europe launch came hot on the heels of the exchange’s explosive growth in Japan and US.

A positive step amid the bitcoin correction

bitFlyer received its European PI license from Luxembourg regulator Commission de Surveillance du Secteur Financier. The primary target of the company is the audience that is currently underserved in Europe that is professional and high-volume traders.

Andy Bryant, the COO of bitFlyer Europe was quoted as saying:

“Through our web interface or API, traders can get up and run quickly and benefit from some of the most robust systems, highest speeds and an interface designed with their specific needs in mind.”

Being the only licensed exchange in Europe, bitFlyer will give the traders access to the world’s largest bitcoin trading market in Japan. According to the estimates, approximately 10 billion euro of bitcoin is traded per month worldwide. This makes euro the third largest bitcoin market after US dollar and Japanese Yen.

How do you think bitFlyer’s entry in European Union will affect the cryptocurrency market? Let us know your thought in comments below and follow or write us on twitter and facebook page.

The presented content may include the personal opinion of the author and is subject to market condition. Do your market research before investing in cryptocurrencies. The author or the publication does not hold any responsibility for your personal financial loss.