The past weekend has been a great one for the Bitcoin and altcoins as people got to see a lot of green in the cryptocurrency market. The signs of life have bloomed into the market that signals a bullish run. Earlier this month, BTC price was struggling to rise above $6,500 mark and now with it being just a touch shy away from closing on $9,000, all the hopes have been raised high.

Other digital currencies are positive as well such as ripple which is at $0.8757. Bitcoin Cash has taken a whopping surge and is now sitting at $1,422 while coins like Litecoin, Qtum and Bitcoin Gold among others are on the rise as well.

History on the repeat 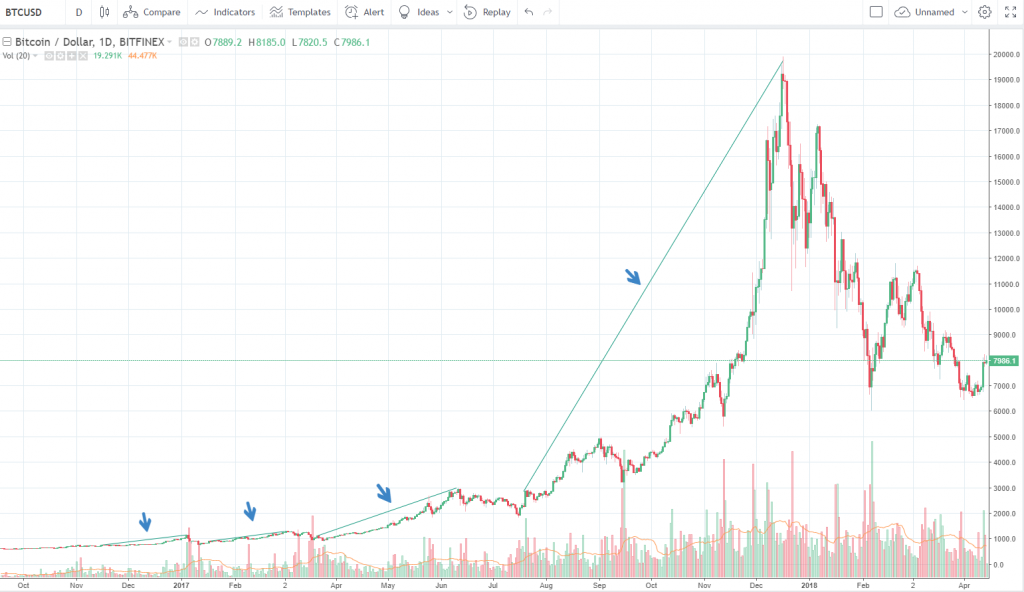 So, if history repeats itself, we have already begun to see the change in the market. However, with the current expanse of change, the bull run is likely to be way bigger than the last one.

We are already experiencing the taste of bull run in the market as Bitcoin reaches $8,929 while Ripple comes close to touching the $1 level. Bitcoin Cash is celebrating $1,413 while some altcoins take a surge of as big as 20 percent. Moreover, BTC price is firmly being above the trend line which was initially facing the resistance at $8,500 level.

For the past two weeks, there has been a slow change going on that resulted in an increase in crypto value that means the downward trend has hit a pause and a reversal is taking place.

The data from TurtleBC represents a huge buy percentage in cryptocurrency market across various coins like Bitcoin, Ripple, Ethereum, and Dash etc. In December 2017, this high has been of 88 percent that has risen to more than 92 percent this time, which has happened the first time since March 2017.

A number of experts have predicted bitcoin prices that go as far as $1 million. McAfee who is one of the top influencers in the crypto community has also stated that a bull run is imminent.

Events are lined up, bull run is set

Well, let’s not forget about the upcoming events that could affect the market. On may 14, we would be witnessing the Consensus event by Coindesk that induced a bull run last year as well.

We are currently at a point where regulators around the world are also being more clear about cryptocurrencies whether it is to outright ban them or put KYC/AML measures to protect consumer interests. Overall, we are at a huge turning point where a number of factors are pumping the bull run right now!

Do you think a bull run is on its way? What will the BTC price by the end of 2018? Share your thoughts with us!

Stan Peterson
419 Articles
Being an active participant in the Blockchain world, I always look forward to engage with opportunities where I could share my love towards digital transformation.
advertisement