We believe “Alone we are one drop – Together we’re an ocean” – And yes, our latest blockchain conference, India Dapp Fest ’19 in Silicon Valley of India was a great success and it wouldn’t have been possible without the support and cooperation of our sponsors, media partners, outreach partners, developers, audience and the entire community who excitedly marked their presence at the venue.

THANK YOU AGAIN, EVERYONE, FOR MAKING THIS EVENT A GREAT SUCCESS!

If you’re still wondering what India Dapp Fest was all about, we suggest you browse ‘India Dapp Fest or Blockchained India’ on your Google or search box of any search engine – you’ll be amazed to see how superbly a blockchain community organized one of the Asia’s biggest blockchain conferences during June 2019.

Organized by Blocumen Studios and powered by Blockchained India, India Dapp Fest was a five days visionary conference by many blockchain and crypto enthusiasts, professionals, developers, crypto proponents, blockchain startups and experts in India. The event was followed by nationwide roadshows, conducted across major cities of India to raise awareness on emerging trends and gather opinions and voices of blockchain & crypto proponents of the country. This was intended to later prepare a blockchain-friendly regulation draft report and present it to the lawmakers of the country. In addition, the event represented some of the brilliant brains behind the innovative products built on top of blockchain technology – and debuted itself as a platform for blockchain hackathon and a perfect podium to pitch for their upcoming big idea in blockchain space.

On top of all, it was an ideal dais for excellent minds to be a Draper University Hero, Silicon Valley’s top entrepreneurship accelerator program!

This conference was believed to be one of the biggest conferences in India in the year 2019 – because, the event initially featured 3 days for interactive workshop & hackathon wherein Matic Network (the famous blockchain project raised funds from Binance IEO and gotten attention from Coinbase Ventures), Algorand, a permission-less, proof-of-stake blockchain and technology company and Chain Security (a blockchain security firm) were key players to interact with participants, guide them, mentor them and judge them for selection to proceed for project pitching session. Later, the last two days of the fest were focused at blockchain conference with some amazing talks, interesting panels, pitching sessions and finally the launch of India’s long-awaited blockchain-friendly regulatory recommendations report. 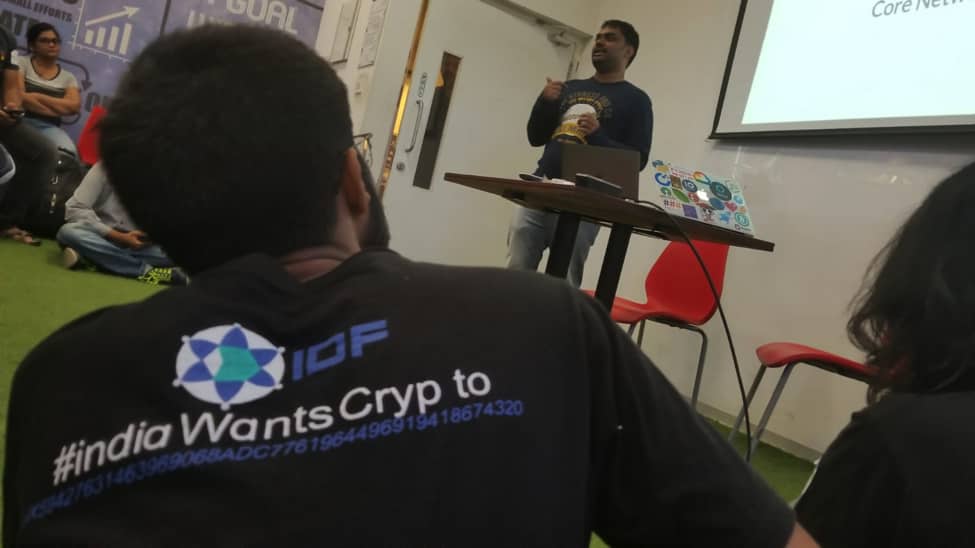 With the dedicated three days of workshop and hackathon from June 11 – 13, organized at IndiQube Alpha Building Co-working space in Bangalore, mentors & judges finalized 8 participants who were offered an opportunity to pitch for the final session in front of investors and judges. Later, the focused conference took place for two days from June 14 – June 15 at the LaliT Ashok Bangalore with the introduction of organizers and spirit behind the whole idea – the Blocumen Studios and Blockchained India by dynamic entrepreneur and Draper University Hero, Akshay Aggarwal. 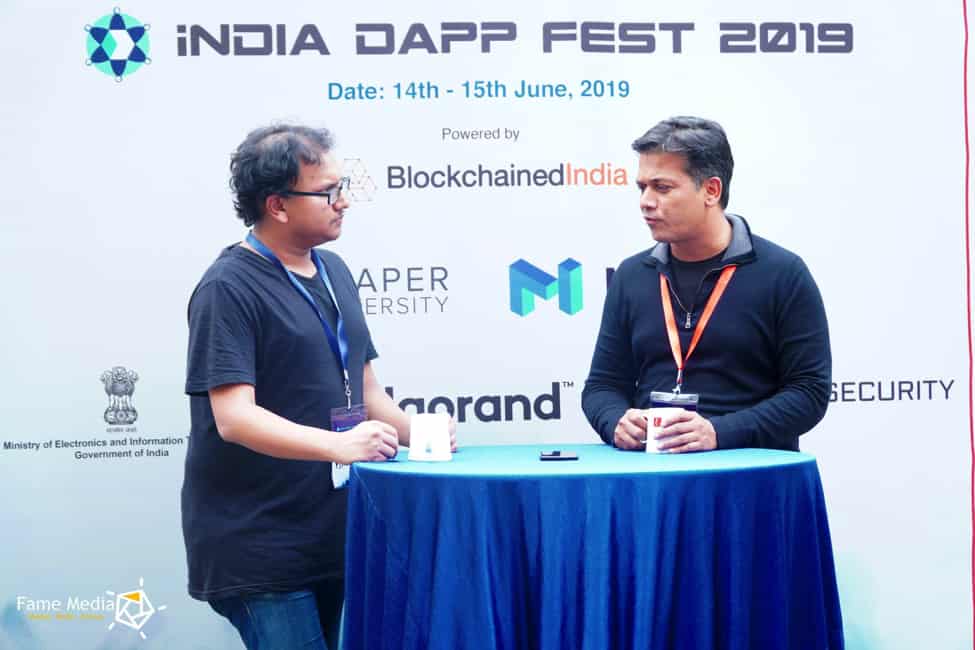 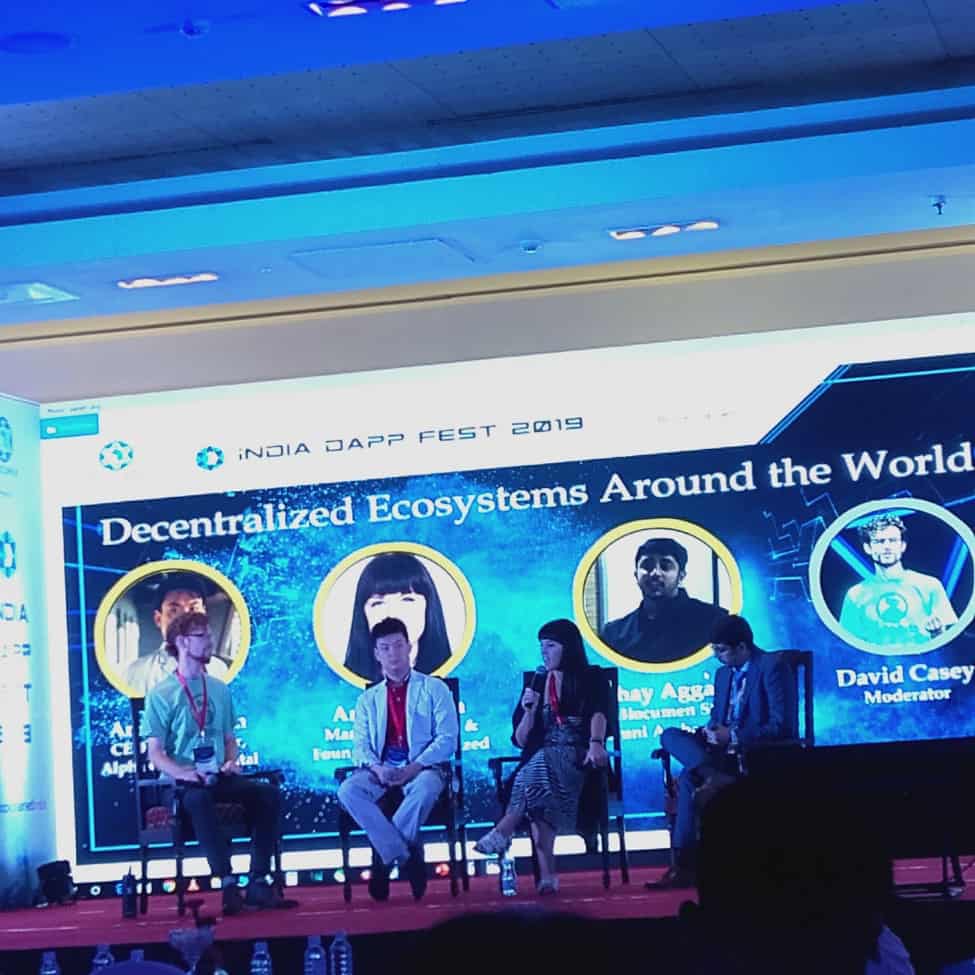 Yet another panel then excited our blockchain enthusiastic audience which centered around the fantastic topic – “Access & Control on the Blockchain: Public, Private and Consortium Models” moderated by  Sam Noble CTO – EOS Dublin, Ravi Chandrasekaran – Practice Partner – Blockchain at Wipro Technologies, Gokul Alex – Associate Director, PwC. The key takeaway from this panel was how private and public and consortium blockchain works and the use-cases of these models.

And then the stage was filled with the popularity of Matic Network and how Indian entrepreneurs successfully raised funds from the largest crypto exchange, Binance’s IEO, also funding from Coinbase Ventures, investment firm by Coinbase crypto exchange. Mr. Sandeep Nailwal, Co-founder & COO of Matic Network addressed the audience with his successful journey of launching Matic Network with other brilliant minds from India. He spoke about “Building to Scale: Side Chain Solutions” which was one of the inspiring talk audience ever experienced. 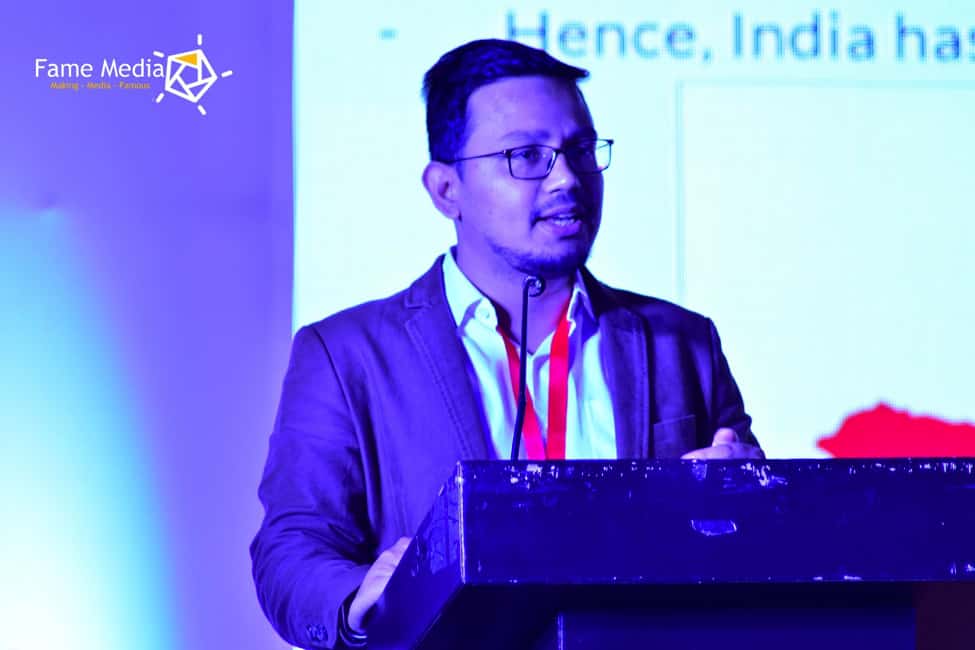 Ahead of lovely lunchtime, the audience enjoyed two more incredible talks – first talk by Mr. Subbu Jois Founder, Aurigraph.io on ‘Quantum Cryptography & Protocols for the Future’, and another by Kumar Anirudha IOTA steering committee member on Universal Payments on the Blockchain.

In his Panel on Quantum Cryptography, Mr. Subbu Jois says that “The world is shifting away from centralized Database and Applications and Data Handling” which hints why is decentralized ecosystem should be essential for our future.

Meantime, our media partners and outreach partners couldn’t wait a single second to speak with our speakers and interview them to feature on their website. Naimish from CoinCrunchIndia interviewed Sam Noble, CTO of EOS Blockchain whereas Nidhi Kolhapur from Coinpedia quickly captured the insights from Nitin Gaur, IBM Blockchain. Also, Shrikanth from Blockmanity.com and Shiv from Crypto Conversation sat down to discuss the present and future plan of Algorand with it’s brand Ambassador, Gokul Alex.

While Lunchtime was organized to enjoy delicious food, our audience didn’t wait a single minute to build networks and introduced themselves to speakers and dignitaries of blockchain space at IDF. 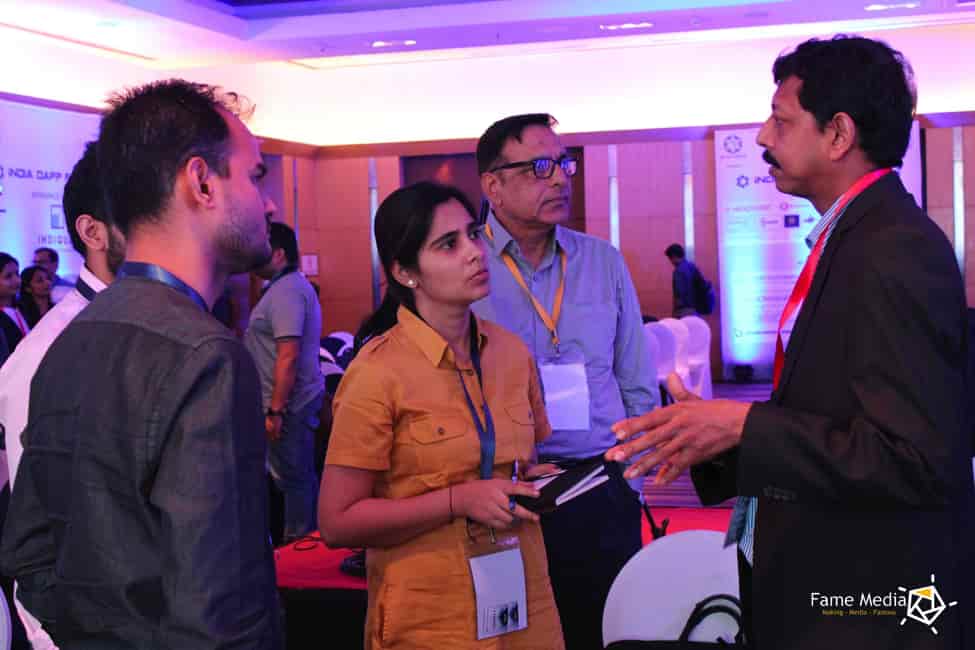 The audience, speakers and team of IDF then back again to listen to experts on yet another most interesting topic ‘Unicorns of Blockchain: Too early in the day?’, which received attention from country’s blockchain entrepreneurs and founders of startup companies. The panel was moderated by Amrit from Headstart with speakers Brij Bhasin from Money Single, Manish Singhal, and Anderson Tan from Alpha Omega Capital. The panel highlighted what it takes for a blockchain company to be a unicorn and what put the blockchain project set out from the world! While addressing the questions, venture capitalist and Philippines entrepreneur Anderson Tan from Alpha Omega Capital notes that; 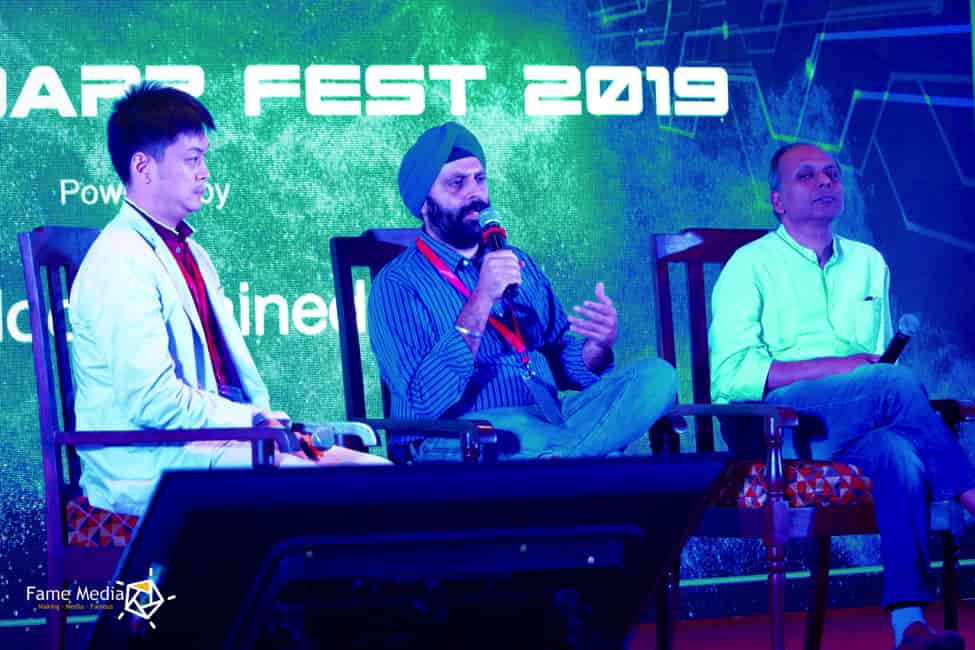 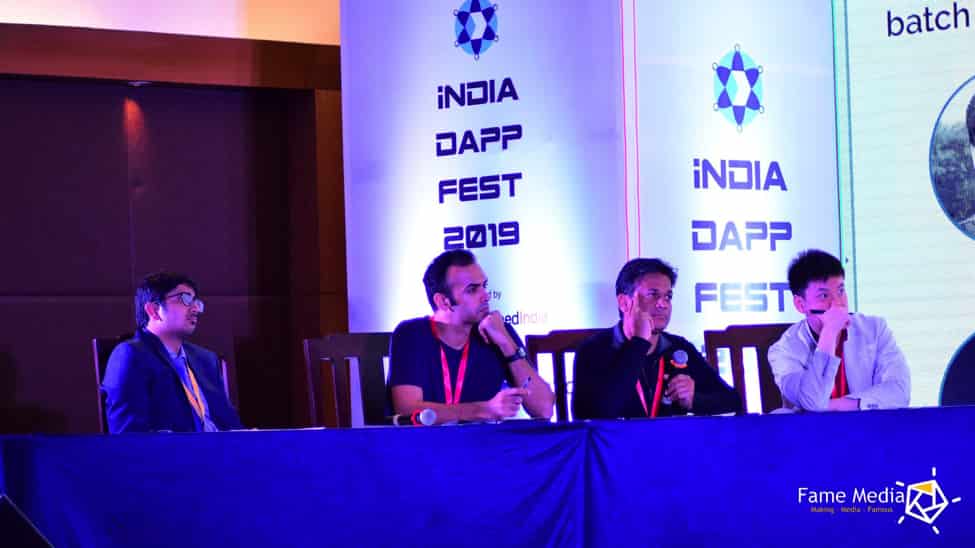 The energy was still on peak..!!! With the huge success of the first-day conference, we all were super excited and doubled charged to mark this event like Asia’s biggest blockchain conference. 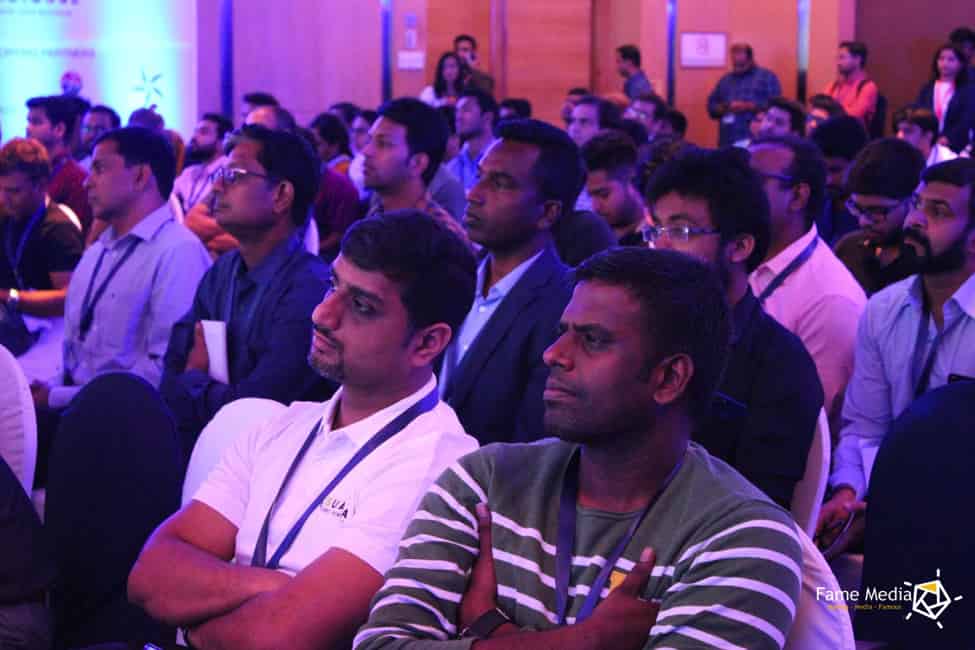 So the day 2 of India Dapp Fest conference began with Guarding Smart Contracts by Mr. Jitendra Chittoda from Chain Security who also interacted with the audience and resolved their queries revolved around security, smart contract, and blockchain.

It was then continued with a thrilling panel on “Locking Down Data on the Blockchain”, with speakers Nilesh Trivedi from Clear Tax, Amol Kulkarni from Intel, Jitendra Chittoda from Chain security – Moderated by Anirudha from Acyclic Labs.

After an amazing panel session, the audience was eagerly waiting to listen to Dr. Ajai Garg who leads Department of Cyber Security International Corporation and Startup Innovation, MeitY from Government of India. He spoke about his views on blockchain technology, the problems around this emerging tech and how to resolve.

In his talk he adds;

The biggest problem that blockchain will solve is to make you the owner of the data and help monetize it. He kept on adding; “The need for us (of blockchain) is bigger than that for the West”. “Today’s youngster is not ready to take a B-grade quality of life”.

After a mesmerizing talk by Ajai Garg, Gnana Lakshmi, Chief Technology Officer of Trustlin and a leadership fellow at Women Who Code filled the success spirit of women and talks about Transcending the Binary by citing Women Who Code. After her quick talk, the most compelling panel was organized which is perhaps the essence of today’s blockchain space. 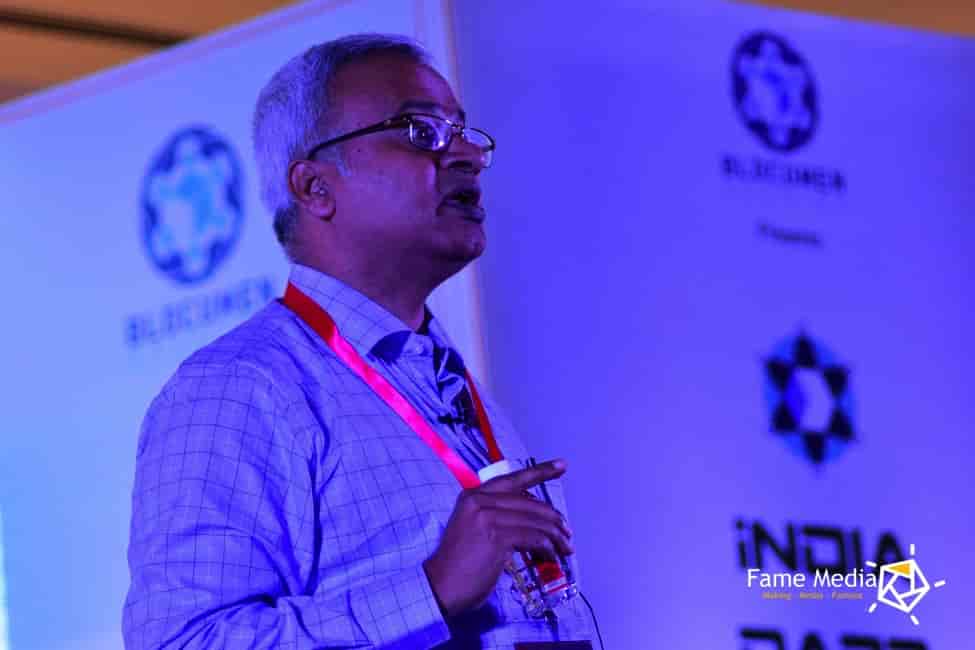 “Keeping in fear the best way to rule effectively. The true essence of blockchain comes from being fearless. Remember, blockchain is not just a technology but a philosophy.”

He further spoke about Debt based money and points;

Also, this was the day when Blockchained Team ( India Dapp Fest Organizer) were launching Regulatory draft policy report and the team shared descriptive slides, representing nationwide observation about blockchain and what really Indian blockchain & crypto community needs from India in the crypto industry.  The report was gathered after 400+ people participated and gave their opinion on crypto regulations with 33% Entrepreneurs, 32% Information Technology professionals, 21.70 % Blockchain Enthusiast, 8.60% Student/Intern, 6.50% Researcher, 3.70% Investor, 0.70% lawyers, and 0.30% Journalists.

The report was majorly gathered from Bangalore, Hyderabad, Mumbai, and Delhi wherein blockchain & crypto community from Mumbai & Hyderabad were higher to provide a response and then followed by Bangalore and Delhi. With the collective report observation from four top cities of India, Mr.Anirudh Rastogi, who is the partner at Ikigai Law then took the stage and talked about recommendations for government to regulate cryptocurrencies. In his talk, he adds;

“Government must change the approach towards regulating cryptocurrencies” by noting, Regulators are “Overestimation of risk and underestimation of potential”.

He goes on adding Regulatory Sandbox update which had recently removed crypto products including crypto assets, ICOs, chain marketing services, and any such products while kept a safe note on emerging technology including blockchain. Concerning the similar contest, he adds;

Self-regulations, co-regulation can do a better job at regulating fast emerging technologies. Sandbox opportunity is a lost opportunity.

In addition to the draft report, the second-day event ended up with award presentation of Draper University Pitch completion.

Other highlights of the event were ‘Conscious Decentralization, a talk by Jessica Zatler, exceptional panel discussion on “Crypto Surfing: How to Ride the Waves” by Neeraj Khandelwal Co-Founder & CTO, CoinDCX, Abhinav Ramesh CEO and Co-Founder, Murmur Dapp, Sainath Gupta CEO and Founder, Prime, another excellent panel on “The Enterprise Diaries, lessons to Iterate On” from four dignitaries – Prem Kumar from PwC, Amol Kulkarni from Intel, Ram Gullamuddi from Zagg Protocol – moderated by Vipul from NassComm.

And then we wrapped up India’s biggest blockchain conference with a networking session and thank you note.

We heartily thank everyone who made this event a huge success and we’ll soon catch up again and hope that the Government of India will also take into consideration the collective voice of blockchain & crypto professionals ahead of formulating rules/regulatory policies around crypto & blockchain technology for citizens of India.