Bitcoin price correction of over $10,000 on Monday led to high volatility in its price as traders both institutional and retail were seen selling aggressively. This also led to record trading volumes across several crypto exchanges in both the spot and futures market. While the market pullback did not really deter long time hodlers and many believed the top cryptocurrency would manage to recover its losses, on-chain metrics suggest otherwise.

Ki-Young Ju, the CEO of bitcoin analytics firm CryptoQuant highlighted that on-chain metrics for BTC suggest that the top cryptocurrency might be headed for another correction before the recovery. Ju highlighted that since yesterday’s correction, almost 15,000 BTC has accumulated on Coinbase signaling another massive sell-out on the cards. Apart from BTC accumulation on the exchange, bitcoin miners have continued selling their stash since yesterday.

Nothing has been changed since yesterday.

Miners are selling, no significant #stablecoin inflows, no #Coinbase outflows, and 15k $BTC flowed into exchanges since yesterday.

Coinbase Exchange OutFlow Dries Up While Miners Continue to Sell

A key metrics to determine the bullishness of traders is done via the amount of BTC moving out of the exchanges which was quite significant throughout this bull run, however, the outflowed almost dried up yesterday on Coinbase suggesting traders are more willing to sell and take the profit rather than holding on to it. 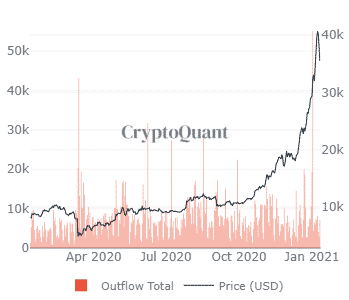 Bitcoin miners whose buying/selling is also used to determine the market sentiments turned bearish as miners continue to sell despite a bloody Monday where the top cryptocurrency lost more than 20% of its market within a day. CryptoQuant data showed that the Miner Position Index (MPI) dipped significantly as well showing miners are selling their holdings to take the immediate profit.

Apart from these factors, there was no significant inflow of stablecoins onto exchanges either. All these factors combined suggest that Bitcoin price might be up for another correction today itself.

Bitcoin price recovered almost half of the losses incurred yesterday and was looking well set to consolidate above $37,000, however as the US session started a couple of hours ago, the price started to slump further and currently trading a $33,500.