According to the agreement signed between Ripple and US Financial Crimes Enforcement Network (FinCEN), XRP is labelled as a currency and not a security. Recently, US SEC made its stance clear on Bitcoin (BTC) and Ethereum (ETH) that they are not securities, so the question is if Ripple is up for the same fate.

The biggest point of concern in the Ripple community has always been if it will be classified as a currency or security. After the US Securities and Exchange Commission (SEC) clarified its stance on Bitcoin (BTC) and Ethereum (ETH) that they are not securities and won’t be regulated as such, investors have been waiting for something on Ripple. But nothing has been said on Ripple yet.

However, an agreement between Ripple Labs and US Financial Crimes Enforcement Network (FinCEN) in 2015 has been uncovered. The definition set by FinCEN in the agreement can’t be superseded by the SEC as noted out by the Twitter user Richard Holland: 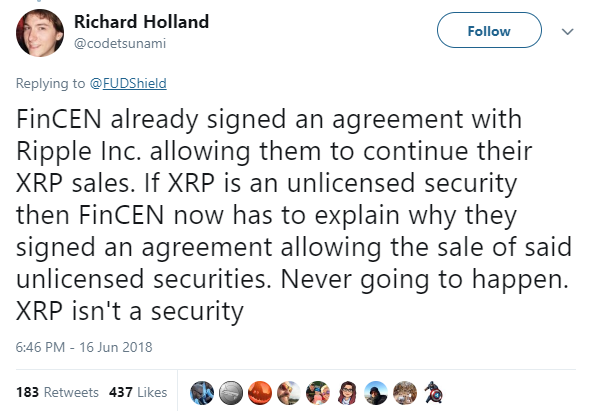 According to the FinCEN news report, Ripple has been charged with a fine of $700,000 for “acting as a money services business (MSB) and selling its virtual currency, known as XRP, without registering with FinCEN, and by failing to implement and maintain an adequate anti-money laundering (AML) program designed to protect its products from use by money launderers or terrorist financiers.” Since then, the company has worked accordingly on its business practices. However, certain statements in the agreement could potentially affect the classification of XRP.

Is the Ripple debate finally over?

“The currency of the Ripple network, known as “XRP,” was pre-mined. In other words, unlike some other virtual currencies, XRP was fully generated prior to its distribution. As of 2015, XRP is the second-largest cryptocurrency by market capitalization, after Bitcoin.”

Holland is basically an entrepreneur and XRP wallet creator who says: “These are the agreed facts of the settlement where FinCEN agrees with prejudice that XRP is a currency and therefore not a security. This debate is over.” And further notes:

“Whether or not XRP is a security shall not be dictated by one lawsuit. The SEC is the governor of that. I think it is very clear that XRP is not a security. It exists independently of Ripple the company. If Ripple, the company shut down tomorrow, XRP will continue to exist.”

Currently, Ripple is facing class-action lawsuits that claim XRP is a security and controlled by Ripple. In response, the company has hired former SEC officials to represent them in court.

Do you think in the wake of this agreement, SEC’s decision would be in favour of Ripple? Share your thoughts with us!

US Youth More Interested in Crypto Than Mutual Funds
Facebook Twitter LinkedIn Xing
Sagar Saxena
116 Articles
Passionate about Blockchain and has been researching and writing about the Blockchain technology for over a year now. Also holds expertise in digital marketing. follow me on twitter at @sagar2803 or reach out to him at sagar[at]coingape.com