1Inch, a new DEX aggregator platfrom that allows users to swap ETH across major DEX protocols, launched its governance token on Christmas eve and also launched a massive airdrop campaign to attract more users to its platform. The DEX aggregator platform within a week has seen significant growth in terms of the trading volume seeing a $1.5 billion growth averaging $88 million/day.

The price of the 1Inch token has registered a continuous dip today currently trading at $1.17 with an 8% loss over the past 24 hours. 1Inch registered an all-time high of $3.0  at the peak of the airdrop campaign and Binance listing, however, the token has lost more than 37% of its market until now. 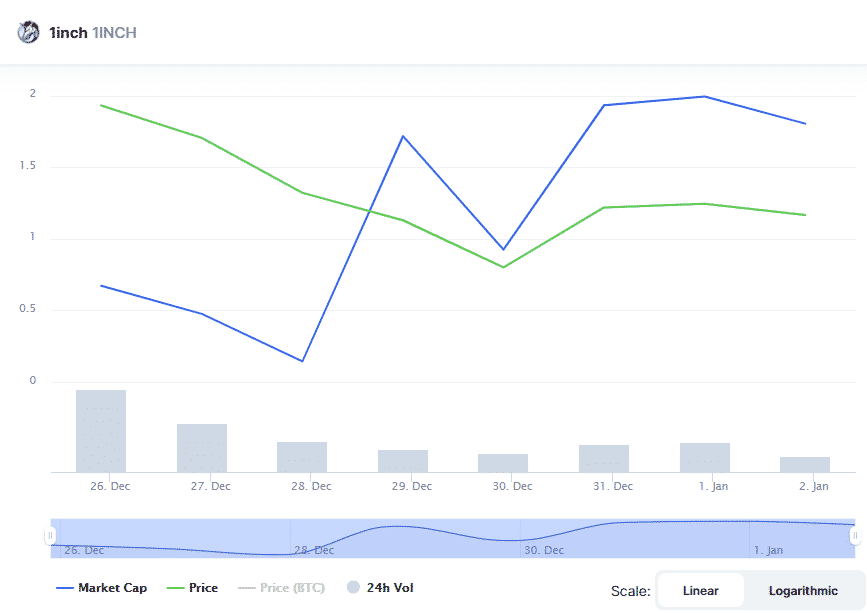 1Inch token recorded its highest daily trading volume on New Year’s eve with over $248 million, however, the momentum fizzled out on new year registering more than a 51% drop to record a daily volume of $107 million.

The newly launched governance token is a Binance backed project and has already been listed on Huobi, FTX, KuCoin, Kucoin, and OKEx. 1Inch’s new instant governance was widely discussed at the time of the launch as it would allow for the direct interaction of the community for the protocol changes. The firm explained how its instant governance model would help in community participation and better protocol changes. The firm said,

1inch Network is launching with “instant governance”, a new feature that allows the community to vote for specific protocol settings under the decentralized autonomous organization (DAO) model, in a transparent, user-friendly, and efficient way.

The new governance model would allow the community to participate, benefit, and vote for specific protocol settings without any barrier to entry.