After ALGO price rose from $0.289 to $0.3134 on December 24, the bulls and bears have struggled to take control of the market. In this article, we will analyze the price action and see what all is going on behind the scenes.

In 2020, Algorand continued to focus on improving its protocol and ensured better services and long-term growth and sustainability. Algorand has seen stellar growth over the past year and sees 500,000 daily transactions. Over 500 companies are developing their applications and protocols on Algorand.

Another critical factor in Algorand’s growth is its positioning as a DeFi dark horse. With its underlying high-throughput blockchain, Algorand will be able to bring DeFi apps to the masses.

Algorand [ALGO] Price Analysis, What to Expect in 2020?

After starting the year at $0.216, ALGO prices rose up and reached a high of $0.765 in August 2020. However, the price then suffered two straight bearish months – September and October – which saw it drop to $0.247 by the time October came to a close. 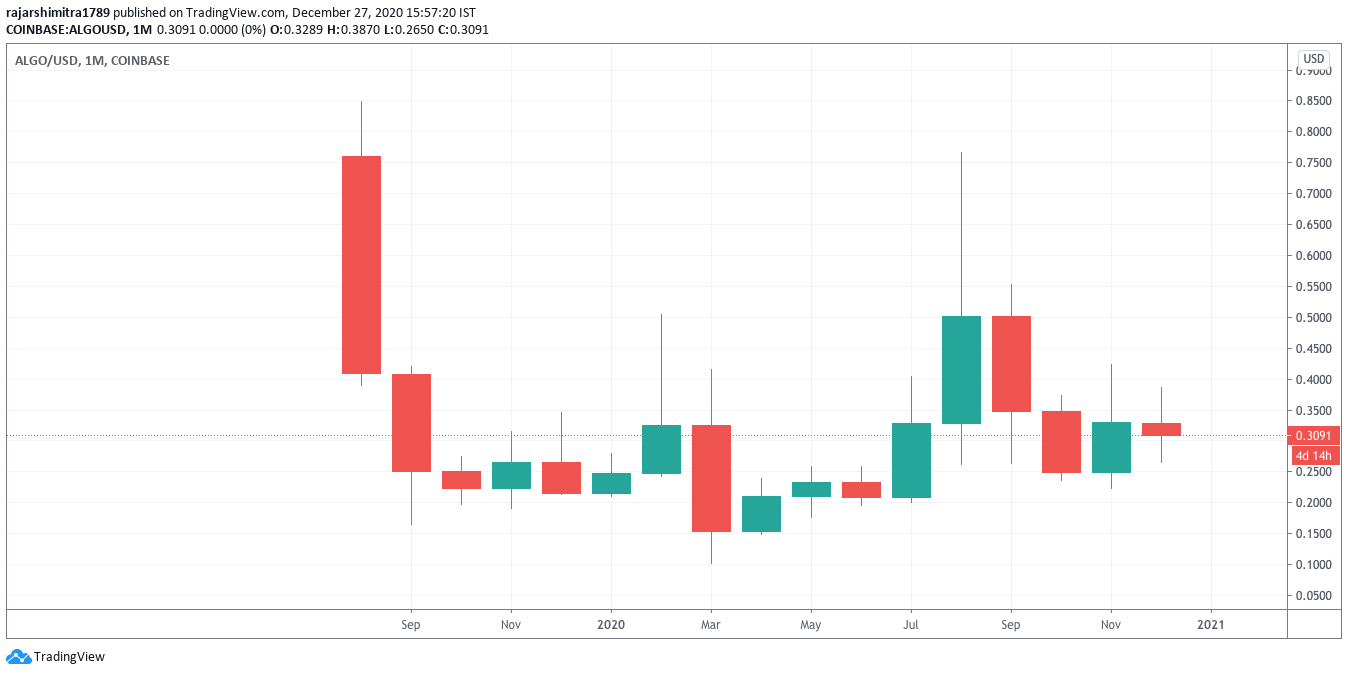 Since then, a bullish November has ensured that Algorand ends its valuation around the $0.308-mark. Let’s lower the timeframe to 1-day to take a closer look at what’s happening behind the scenes.

On December 12, the buyers bounced up from the support at $0.2882. Over the next seven days, the price broke above the 50-day, 20-day and 200-day SMAs and reached the $0.356 resistance barrier. Following hard rejection, the price has gone on a downtrend.

How does the future bode for ALGO’s price?

To understand the future price action of Algorand, it will be helpful to look at the ALGO/BTC daily chart. While the chart has had 10 red candlesticks out of the last 12. During this heavy downtrend, the relative strength index (RSI) had dipped into the oversold territory.

This shows that the asset is considerably underpriced, which could trigger a future bullish comeback. To understand how much the asset will grow, let’s look at the 4-hour chart.

The MACD (moving average convergence/divergence), in the 4-hour chart, shows sustained bullish market momentum. There are two specific price levels which the buyers will need to flip from resistance to support to continue this upward movement.

Upon conquering these levels, the buyers will be able to reverse the market sentiment from bearish to bullish and aim for the $0.35 psychological level.

Its always better to hear from experts themselves and ALGO has been making lot of buzz in crypto space recently, clearly attracting many top analysts. Who Doesn’t know Credible Crypto?

Credible crypto one among the major crypto analysts with more than 89k followers is a long term holder of ALGO tokens and is clearly bullish in ALGO since day one. As per his analysis he is targeting at least $1 for ALGO price.

Let us know your ALGO price Predictions for 2021.